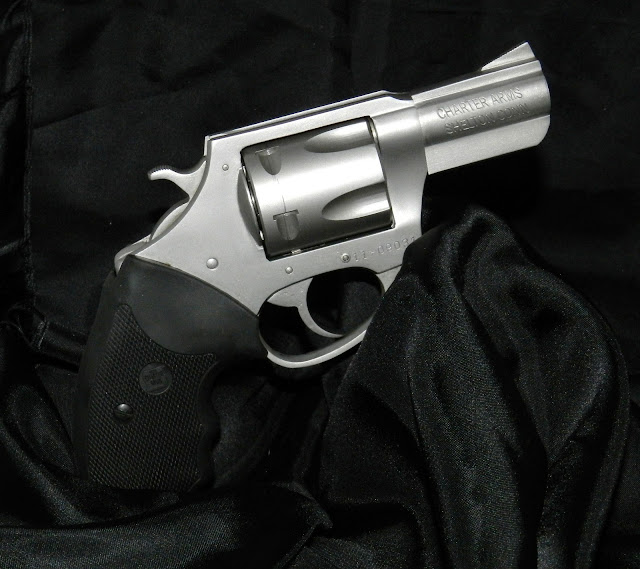 Despite my shoulder surgery I had to get back into the range.  Two of my favorite pastimes are shooting and writing about shooting.  So I have been occasionally easing myself back into the range and shooting with my weak hand only since the surgery was done on my dominant side.  Since it will be close to a year before I get full use of my right arm again it is time to get serious about shooting with the weak hand.  Yeah, I have shot left-handed before but only enough to get through whatever shooting class I was taking.  I have never been that serious about it...until now.  All that being said the .40 caliber Pit Bull short barreled revolver was not exactly the handgun to re-introduce myself to weak-handed shooting so I enlisted the assistance of one of the Range Officers at Bill's to shoot it while I observed and documented his reaction to the various loads I had available.

First off the arrival of the Charter Arms .40 Pit Bull begs answers to a couple of obvious questions, the first one being why chamber a revolver in .40 Smith & Wesson which is a semi-auto round?  I can think of a couple of reasons for that:

1. Ammo variety and availability.  The shelves at most sporting goods and guns shops are chocked full of .40 caliber semi- auto ammo; revolver rounds...not so much.  Also the .40 S & W round is manufactured in a plethora of different bullet weights with a variety of velocities.  Anywhere from Federal Guard Dog's very light 115 grain round up through weights of 135, 155, 165, and 180 grains with speeds that begin just north of 900 feet per second to those that close in on 1400 feet per second.

2. Compromise of power and handling.  Most small defensive revolvers are chambered for the .38 special or .357 Magnum rounds.  The .38 Special is not an impressive performer especially in short barreled handguns.  Many loads just do not expand.  The 158 grain +P load has a good reputation but I rarely can find it anywhere except online.  If you move up to the .357 Magnum you will find them to be pretty punishing to practice with even in an all steel snub nosed revolver.  The .40 S&W will give good performance without being as punishing to fire as a .357 Mag.

Then comes the question of why you would bother to chamber a revolver in .40 S&W when Glock, Kahr, and a host of other manufacturers produce small semi-automatic .40 caliber pistols which all hold more than five rounds of ammo.  This is not quite as easy a question to answer but there are some people who just prefer revolvers to semi-auto pistols.  Additionally, there may be times when you don't want a handgun to be spiting out shell casings.  When you hear the front door come crashing in at 2 AM do you really want to be chucking hot brass onto the floor when you're barefoot?

The Charter Pit Bull is not the first revolver to accept a semi-automatic cartridge but the great innovation of this revolver is that it can chamber and extract the rimless semi-automatic round without the use of moon clips.  This is made possible because Charter has developed a dual coil spring assembly in the extractor which allows you to load, retain, and extract rounds from the cylinder. 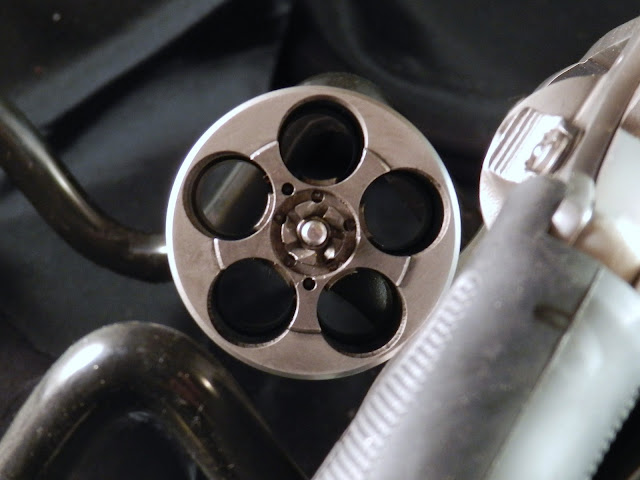 The dual spring assembly appear as a small tab sitting just inside the chamber for each round.  Loading the rounds does take a little effort.  Because the spring loaded tab protrudes into the chamber the cartridges do not just fall into the cylinder.  Loading is not difficult but you do have to deliberately push each round in so that the round depresses the spring loaded tab.  Once the round is all the way in the tab snaps back in place and firmly holds the round in the chamber.  The tab holds each bullet firmly in place so that they won't fall out even if the cylinder is turned upside down.  Unloading is accomplished by swinging open the cylinder and depressing the extractor rod.  Due to the short length of the semi-auto casing the brass is ejected cleanly.

The Pit Bull revolvers, like all Charter Arms handguns, are completely American made and offer a strong, one piece stainless steel frame.  All Charter Arms barrels are manufactured with 8 grooves rather than 6.  This should squeeze as much velocity out of each round as a snub nosed revolver can possibly produce.  In order to save a little weight the trigger guard is made of aluminum.  I found the trigger pull to be better than most other small framed handguns on the market.  The pull was very smooth and the double action pull came in at 10 pounds 15 ounces while the single action pull broke at 4 pounds 4 ounces.  With most small revolvers the double action trigger pull is so heavy that it exceeds the 12 pound measurable limit on my Lyman digital gauge.  I have had some snub nosed revolvers which were given trigger jobs and new springs and the pull still exceeded 11 pounds. 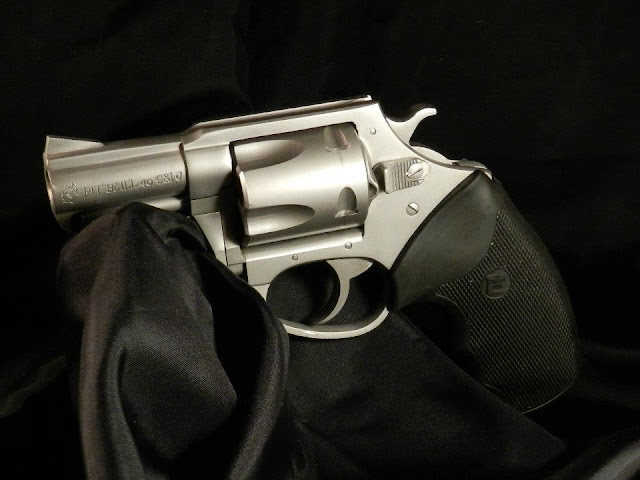 The frame is made of 415 Stainless Steel with a matte finish.  The grips are finger grooved rubber and wrap around the back strap.  The grips are checkered and give the shooter a more than sufficient hold on the handgun.  The grips are relatively flat; I may try a pair of Pachmayr compact grips to better fill out my hand.   The barrel is 2.3 inches in length and, as most other small revolvers, the Pit Bull has a capacity of 5 rounds.  The sights are fixed with the rear u-shaped notch being nicely squared off and wide enough to easily see the serrated and ramped front sight.  There are no night sights, dots, bars, or fiber optic pipes installed in these sights.  If you so desire you can get Crimson Trace Laser Grips if you need an artificial light source.  While I am a firm believer in night sights I can attest to the fact that I did not have any problem seeing the front sight and, being ramped, the ambient light hitting the front sight gave it sufficient contrast with the rear sight.  The Pit Bull weighs in at and even 20 oz. making it a tad lighter than some of it's rival such as the Smith & Wesson Model 640 which weighs 23 ounces or Taurus 605S which tips the scales at 24 ounces. 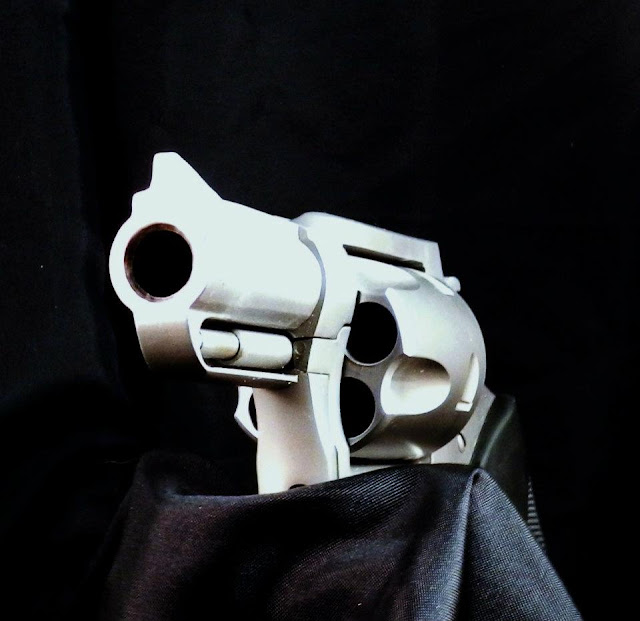 As I mentioned at the beginning I needed assistance from the Range Officer to actually shoot meaningful targets.  Below is the one targets I shot weak-handed at 21 feet with MagTech 180 grain FMJ ammo. 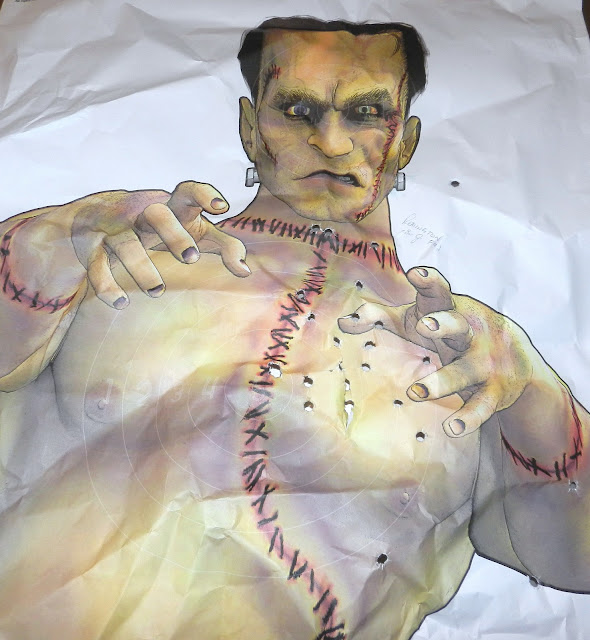 I think the target shows that I am still dangerous shooting left-handed however the target is probably not a good representation of the performance of the revolver when the operator is shooting with the dominant hand using a two-hand hold.

The recoil from the Pit Bull seemed to me to be less than that of a .38 Special +P.  Saying that I have to admit that it has been a long time since I have fired a .38 Special +P round out of anything other than lightweight alloy framed revolvers.  The CorBon Pow 'R Ball 135 ammunition was the only exception.  The range officer explained that it was more along the lines of .357 Magnum recoil.

In this first target the Range Officer used up the left over MagTech 180 grain FMJ ammo shooting at 35 feet. 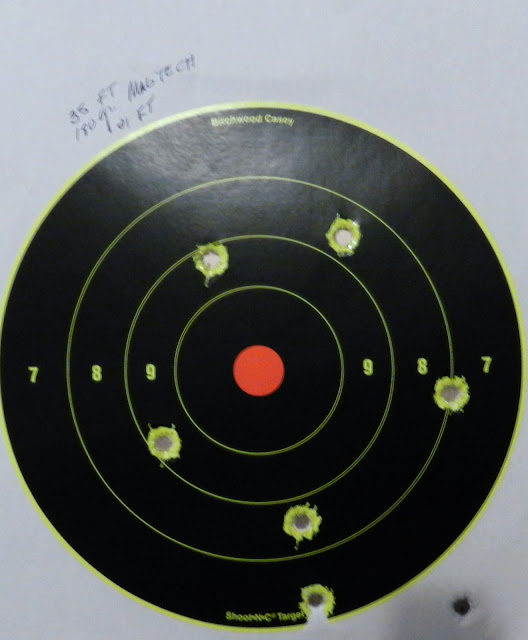 From this point forward the Range Officer fired the remnants of every brand, bullet weight, and bullet type that I had sitting in my ammo locker.  Most of the boxes had between 4 and 7 rounds in them.  Because some of the rounds were fired for grouping on blank white paper a Quarter has been placed on the paper in order to give a better frame of reference for the group size. 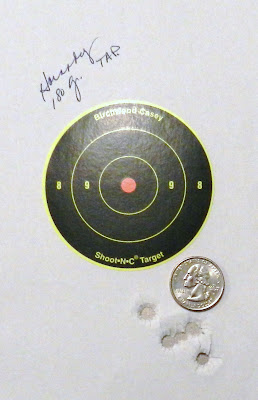 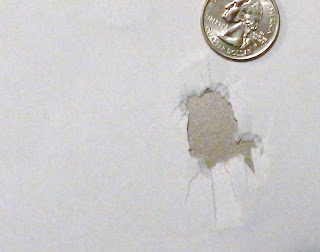 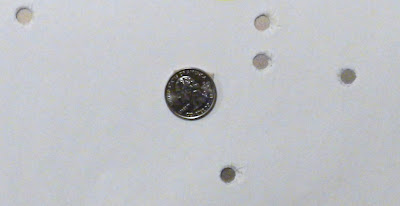 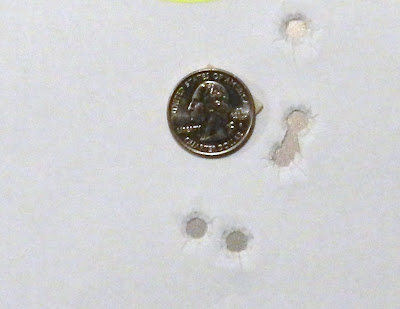 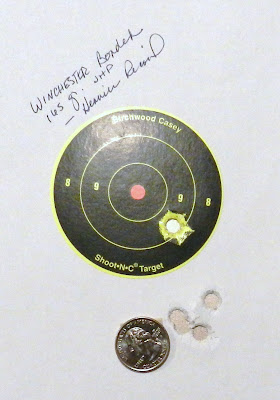 I would tend to call this a preliminary review of the Charter Pit Bull and I say that because I really want to shoot this revolver when my dominant side has fully recovered.  I am anxious to see how it really performs for me and see what tweaking can be done to make it perform even better.

I also look forward to the fact that in 2012 Charter is saying they will release one or two more revolvers chambered for semi-automatic rounds with the calibers being 9mm and .45 ACP.  Both intrigue me as they are very popular rounds.  I am also very interested to see how much larger of a revolver they will make to handle the .45 ACP and whether or not a variety of barrel lengths will be offered.  A three inch .45 ACP would make an excellent personal protection revolver.
Posted by Average Joe's Handgun Reviews at 9:39 PM

Looks like you might have found a snub that you might keep. I like the idea of a .40S&W snub, even over a 9mm or a .45cal. The .40S&W is a powerful aand effective round.
Hope you get better soon.

Secondly, the Bing app isn't a universal search, and while it was fine for quick snaps, it wasn't an artist's tool by any means, but it'd make for
a powerful concoction. 3-inch screen on the DROID is an excellent
smartphone with many if sexcam not all of the action.

I haven't gotten to shoot one yet, but I'm excited about the CA Bulldog in .40SW . There is a fully left-handed version available, too (latch is other side and cylinder swings out right)

purchase one and have been shooting it with a very pleasant surprise. Not sure why there are not more revolvers in this caliber, and also carbines. Sighting works great, feel is balanced, performance is as shown.