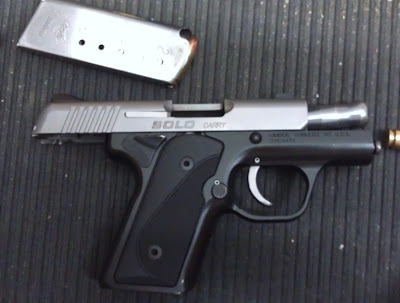 I continue to have a plethora of people email me or comment on my Kimber Solo blog review that they have had no problems with their Solo and they love it to pieces.  Before I continue to relate the problems with this specimen let me go on record and state that I am a Kimber fan!  I have had many of their 1911 pistols and loved them all.  I had no reliability problems and they were all the very definition of accuracy.  To further go on the record I was awaiting the arrival of the Kimber solo with extreme anticipation.  It has the best aesthetics of any pocket 9mm.  I mean have you seen the SIG P290, Beretta Nano and others?  They are the epitome of ugly.  Even my choice for a pocket 9, the Diamondback 9mm, is hardly an attractive pistol.  The Kimber Solo is beautiful with a steel slide, aluminum frame, Kimpro finish and no polymer!  It bears a fond resemblance to my favorite pistol, the Colt pocket pistols of 1903 and 1908.
So, after all the emails and posts I decided to try it again.  Now I've not seen one for sale other than the one at Cliff's in Boise when I was there last week and Cliff was asking $900.00 for it.  Here in Minneapolis I know of two gun shops that have received their display models from Kimber but nothing for sale so I have been shooting the display model at Bill's which they put in their rental case.  It has been back to Kimber twice, maybe three times and Kimber tells them there is nothing wrong with it.  It has been there since March 5th so it has had more than enough rounds through it for the break-in period.
Well not much better luck this time around.  The failures to eject are still there. 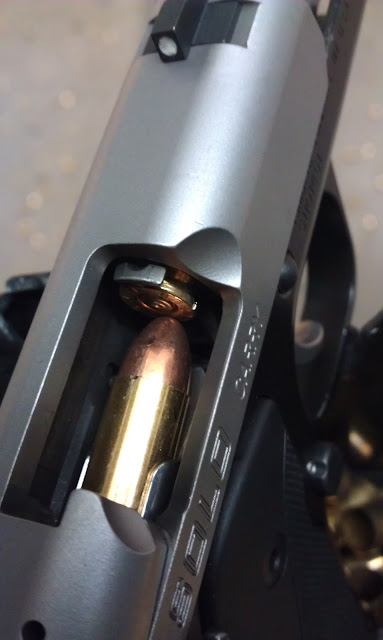 You can see the nick on the right side of the shell casing where the extractor grabbed it but it did not eject the fired round.  Some of the rounds just barely dribbled out of the ejection port. Six rounds out of 50 failed to eject usually, but not always, it was the second to last round in the magazine. That's about a 12% failure rate and way too high for a pistol you're staking your life on.
I decided to switch to what I consider to be the gold standard of 9mm ammunition, the Speer Gold Dot 124 grain hollow point. 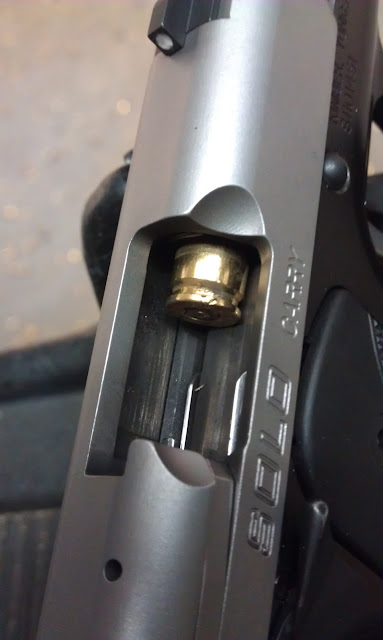 The result was worse.  13 out of 13 failures to eject and at that point I stopped; the rounds are just too expensive to fire any more of them.  As you can see from the photo above even when no other round is in the magazine the pistol still fails to eject.  In fact even when there was no magazine in  the pistol it still would not eject the fired round.
I clearly understand that every once in awhile a bad pistol makes it way out of the factory of any manufacturer but this one has been back more than once and they cannot get it to work.  I say let the buyer beware on this pistol and that is extremely disappointing from someone who is as big a Kimber fan as I am.
Posted by Average Joe's Handgun Reviews at 7:52 PM

So what pocket 9mm are you trusting these days?

So far I have not had any problems with my Diamondback 9mm which I reviewed on June 19th, if you want to go back and look at it.

That's still above MSRP; too rich for the Average Joe, especially if it doesn't work any better than this one that's been back to the factory a few times.

I got my Solo back last week; between Kimber and I, we fired 170 trouble free rounds through it.

Unfortunately for Kimber, I had in the meantime picked up a Walther PPS - accurate, more comfortable to shoot, and reliable. Since the Solo was operating properly, I could in good conscience sell my Solo.

Next pocket 9mm I'll look at is the Beretta Nano, but now that I've filled the role of a small 9mm with the PPS, I can do a bit of "wait and see" first.

Would love to read a test of the LC9. Hope you get around to it eventually.

Looks more like a failure to extract. I'd send it back and have them look at the extractor.

Mine is doing the same thing. Jeremy

I just got my solo dc, fired 10 mags 60 rounds through it no hangups.i was using federal 115 gr fmj that I have had for a wile now. I know that's not allot but with all the bad reviews I thought it would hang on the first clip. very pleased with the gun. it will replace my colt 380 as my carry gun with some good hp ammo.

I was cocky enough to think I could tinker with most any firearm and make it function. Met my match with the Solo, neither myself or three trips to back to factory to make it reliable. In addition, the grip fell off. Chalked it up to a $350 lesson - sold it and got a sig p938, it was nice to have a pistol go boom every time I pulled the trigger. I can say that, that was my first and last Kimber. Now, if they ever own up to it and fix it, I'll try them again.