The history of Colt Firearms is legendary.  They produced the revolver that won the west, with mass produced parts and assembly line production they were at the spearhead of the Industrial Revolution, they produced the model 1911 pistol that helped win two World Wars, they made the rifle used in the Vietnam, armed police officers and detectives with their Official Police, Police Positive, and Detective Special and produced arguably the best modern revolver in the Colt Python.  However in the latter decades of the last century they faltered with high production costs, long waits for product, and political pressure from anti-gunners.  They filed for bankruptcy in the 1990’s and then became very stingy about what they would produce and who they would sell them to.  They discontinued the Single Action Army after WWII and then realized that Ruger and several European manufacturers were cleaning up on sales due to the Westerns series and movies that were being shown on television.  They took their eye off the ball on the 1911 semi-automatic pistol and allowed Kimber, Springfield, and a host of others to take that market away from them.  And they also declared the .38 special medium and small frame revolvers to be dead and only produced the heavier framed .357 Magnums of the Python, Trooper, and King Cobra.  Smith & Wesson was only too happy to fulfill the needs of the .38 Special buying public with their J framed snub nosed and K frame medium sized revolvers.  Being left at the altar once again Colt reintroduced the medium frame .38 specials in a beefed up Police Positive and Detective Special in 1993.  These were blue steel pistols with a 4 inch barrel for the Police Positive and a 2 inch barrel for the Detective Special.  In 1994 Colt brought out 3 inch variations on the Detective Special in .38 Special (the DS II) and .357 Magnum (the Magnum Carry).  None of the revolvers made it into the 1996 line-up and have become fairly sought after items. 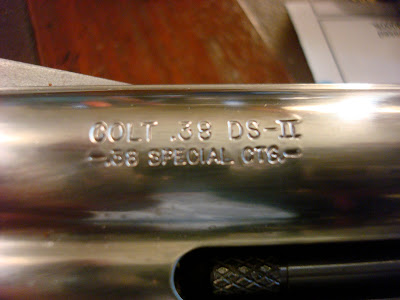 The DS II .38 Special looks like the later versions of the Detective Special with a heavy barrel, ejector rod shroud and transfer bar ignition system replacing the hammer mounted firing pin.  In the 1993-1994 models Colt eliminated their wooden grips replacing them with rubber Pachmayr compact grips. 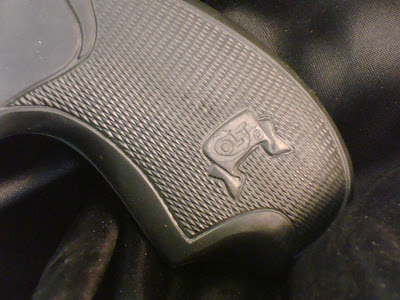 
Let’s examine the individual characteristics of the DS II:

I am not a revolver person and much prefer a semi-auto pistol to wheelguns.  I find the balance and pointability of semi-autos work better for me than revolvers and note that the DS II seems to naturally point high for me.  I do, however, feel that the compact Pachmayr rubber grips are hand filling and make the revolver about as comfortable to handle as possible.

The fit and finish is good but not great.  The exterior is nicely polished and all components fit together very well however there are a lot of sharp edges on the DS II most notably on the trigger which raised a painful blood blister on my trigger finger every time I fired the revolver.  If the DS II was not a sought after collector piece I would have a competent gunsmith round off the edges on the trigger.  The rest of the squared and sharp edges on the exterior of the revolver I can live with including the oddly counter-sunk end of the barrel.  No time and expertise were wasted crowing the barrel. 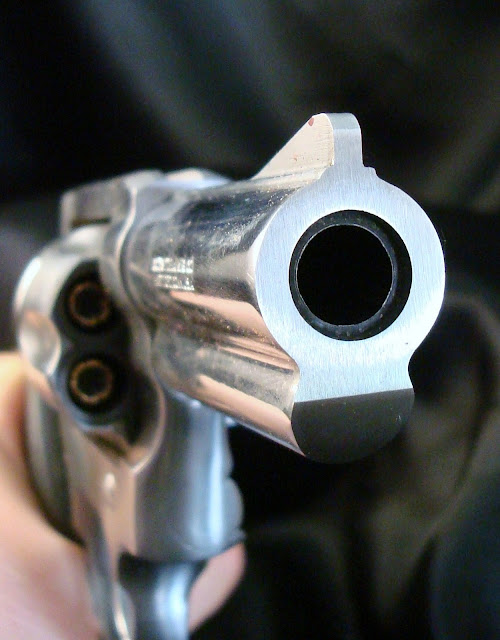 The sights are a squared off notch in the rear of the frame providing good sight trough down to the ramped front sight.  Both sights are naturally fixed with no means to adjust for windage or elevation.  The ramped front sight is rounded without any corners or sharp edges to snag on clothing while drawing the revolver.  This revolver was produced before night sights were common place and despite the rudimentary nature of the fixed sights they are certainly serviceable for their intended application. 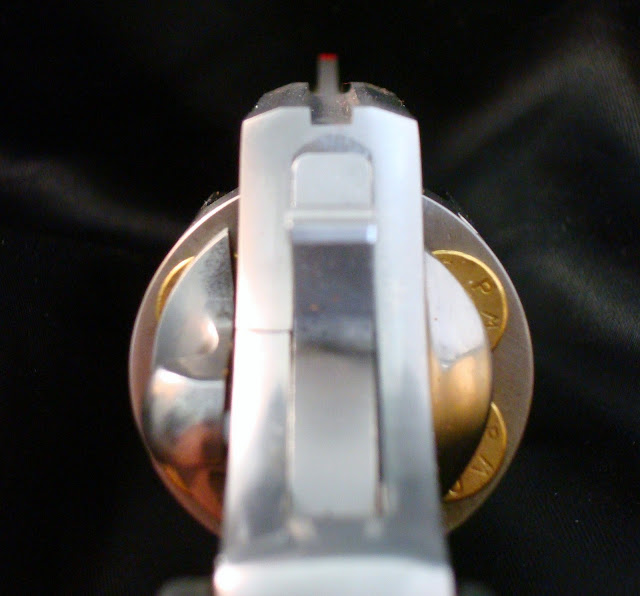 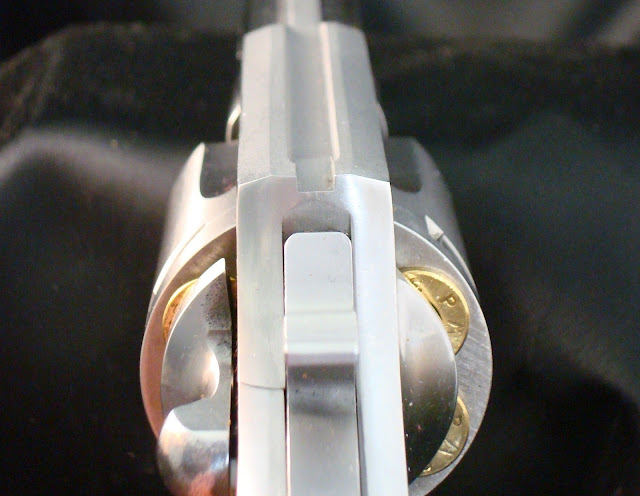 The trigger pull measured an even 6 pounds on my Lyman digital scale and this is pretty good compared to today’s 12 + pound trigger pulls found on some revolvers today.  The trigger pull was very smooth without the stacking found on older Colt revolvers.  Had it not been for the aforementioned sharp edges on the trigger I would consider giving the trigger a rating of excellent.

The .38 Special has a long history as a police and civilian cartridge and has both its supporters and detractors.  However the +P loadings by several manufacturers provide a good defensive load.  I did not have any 158 grain lead semi-wadcutter hollowpoint +P ammo on hand.  I usually find this to be the most accurate load and it packs quite a punch.

With a good inside-the-waistband holster the DS II is easy to conceal and carry.

Being a stainless steel revolver it is completely reliable and there were no issues with chambering any of the loads listed in the next section.

The following defensive loads were shot through the DS II with the results pictured below (all targets were placed at 21 feet):

--PMC Starfire 125 grain +P Jacketed Hollowpoint bullet; this was the most accurate and fairly mild for a +P loading. 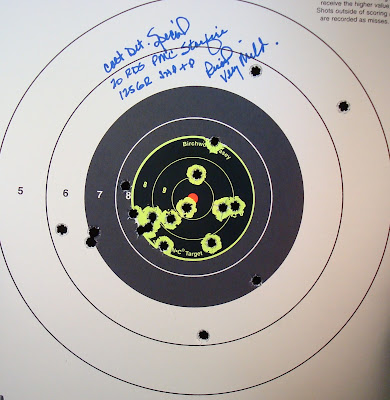 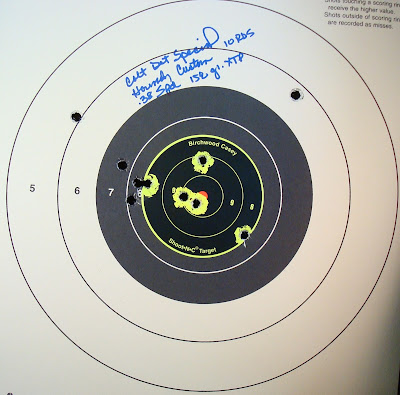 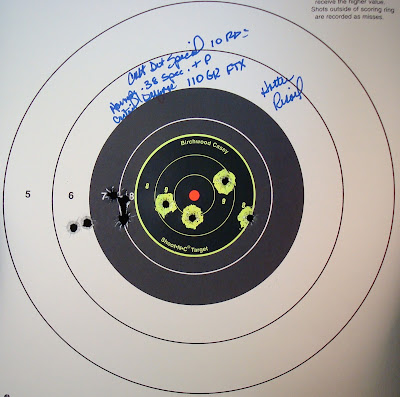 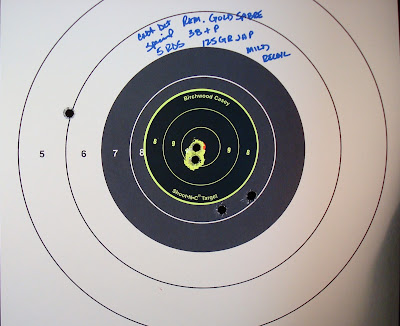 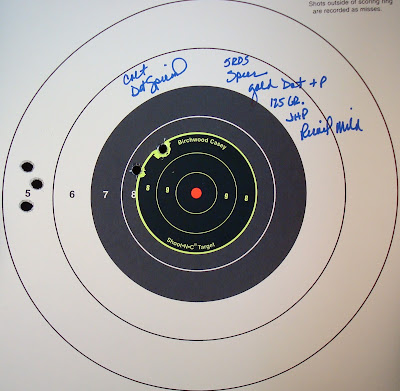 As I mentioned, I am not a revolver person.  Of all the small framed revolvers I have fired over the last several years the DS II is one of the most comfortable I have shot which is greatly due to the fact that it is a completely stainless steel revolver with an extra inch on the barrel as opposed to most of the 2 inch or less barreled scandium or aluminum alloy framed revolvers that are now all the rage.  I am sure it is capable of better accuracy than I can wring out of her.  I like this revolver a lot and wish Colt would think about a re-re-introduction.
Posted by Average Joe's Handgun Reviews at 7:31 PM

I agree and although I own a colt cobra vintage 1972 and do have some fun with it at the range, I limit the amount I shoot due to or out of respect for its age, I'd love to have a newer model for more range time. Seems to me colt has lost more than its former market share case in point is the P238 made by sig, a better gun IMHO than the colt mustang that I owned years ago.
Thanks for your detailed and excellent review
Al