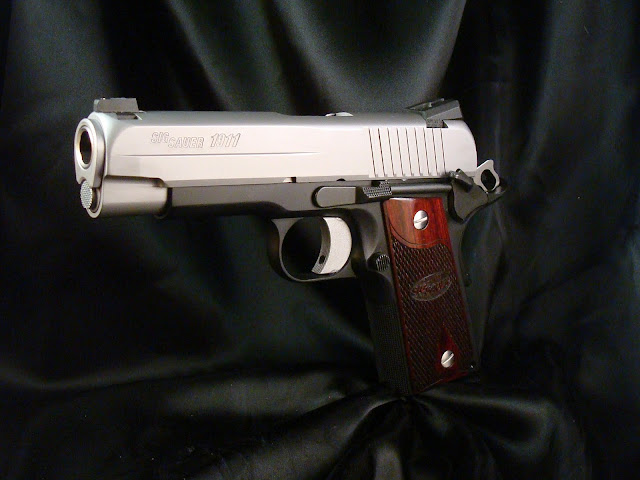 So, what is the SIG 1911 RCS?  I love it when the manufacturer does an excellent job of providing that answer so let me give you what is written about the RCS on the SIG website:
“The RCS – which stands for 1911 Compact SAS – comes from the SIG SAUER® Customs Shop and has been put through the SIG Anti-Snag treatment which our gunsmiths developed to radically dehorn a pistol. Available in either a Natural Stainless (shown) or Nitron® finish the RCS comes with Novak® night sights, checkered front strap (25-lpi), checkered mainspring housing (20-lpi) and slim profile custom wood grips. The grips are either gray diamondwood on the Stainless model or rosewood on the Nitron® version. Each of these 7+1 capacity RCS model 1911 pistols features a stainless steel slide, alloy frame, match grade barrel, hammer/sear set and trigger. The slides and frames are machined to exacting tolerances and hand-fitted to insure reliability and performance.”
What I can add to that is that I absolutely love this pistol.  It is fairly comfortable to carry (more on that later), beautifully finished, points naturally, and is probably the most accurate pistol in my battery.
Let’s look at the specs:
For those that know me, one of the things that I find most favorable is that the RCS is a .45 ACP pistol.  We are rapidly approaching the centennial of John Browning’s masterpiece pistol and it shows no signs in slowing down in popularity.  After Kimber and Springfield stole Colt’s birthright in the market place many other 1911’s have hit the market.  Two surprising contenders were Smith and Wesson and SIG and both produce excellent examples.  SIG has taken so much to the 1911 platform that they bucked the trend of Double Action polymer pocket .380 pistols and produced their own miniature 1911 all metal pocket semi-auto pistol the SIG P238 (reviewed in this blog earlier). 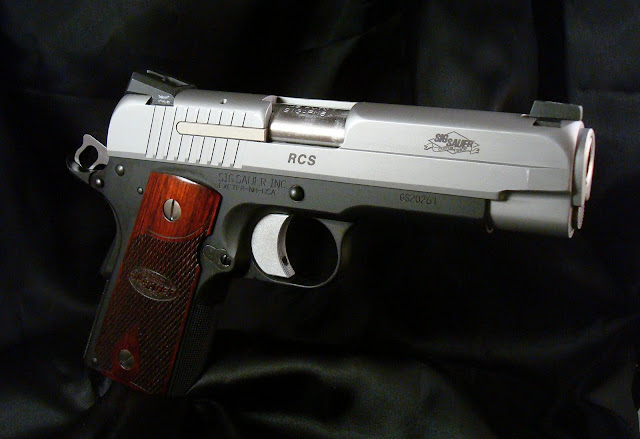 SIG 1911 RCS At-A-Glance
Let’s examine the individual characteristics of the SIG 1911 RCS:
The pistol handles like a dream.  It is well balanced and gives me an overall feeling of confidence whether I am wearing it or holding it.  I have long felt that if a pistol feels comfortable in your hand then you will shoot it better.  The SIG 1911 RCS fills this bill very well.


It’s a SIG; I’ve never seen one where the fit and finish on a brand new one is anything but excellent.  This one turns up the heat with an appealing two-toned appearance featuring a stainless slide and blued frame.  The RCS also features beautiful slim rosewood grips.  I usually replace the grips on my 1911’s with a set of Esmeralda’s exquisite slim grips but the grips on the SIG both beautiful and functional.


The sights are excellent Novak night sights and every regular reader of this blog knows I feel that night sights are an absolute necessity in a defensive pistol.  The sights are fixed so there is no provision for adjusting the elevation.  SIG rear sights are pretty tightly dovetailed into the frame so if you want to adjust the sights you will probably need to enlist the aid of a competent gunsmith who can replace the front sight with one of your preferred height and has the tools to move your rear sight without banging on it with a sledge hammer.  The good news for me (and probably anyone else who buys one) is that the sights were dead-nuts on so there is absolutely no need for anyone to fiddle with them. 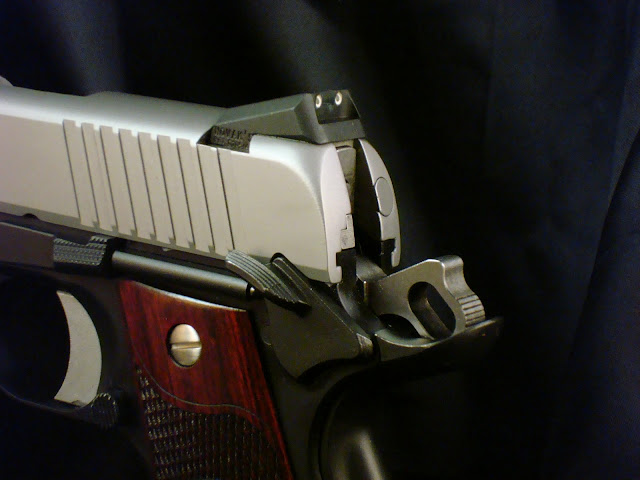 
No need for much discussion here.  Avid Average Joe readers well understand my affinity for the .45 ACP (or .45 GAP for that matter).  Yes there are magnum revolvers, .357 SIG semi-auto chamberings, 10mm’s, and even the more recent .50 GI.  Some are very good, but none have the historical reputation that the .45 ACP has earned and no platform for the .45 ACP cartridge is as battle proven, ergonomic, flat and thin as the 1911 style pistols.


So what is a compact sized pistol anyway?  To answer that question let’s go back to history of 1911 frame sizes.  When the 1911 Government Model was developed John Moses Browning designed it with a 5 inch barrel.  That barrel length was the only option until after WWII when Colt introduced the Commander which has the same frame size of the 1911 Government model but had ¾ on an inch chopped off the barrel length making it 4.25 inches in length.  In the late 1980’s Colt came out with the 1911 Officer’s model which trimmed the barrel length to 3.5 inches and chopped the length of the grip frame reducing the magazine capacity to 6 rounds.
Many people liked the smaller grip frame for concealment but didn’t like the recoil of the .45 ACP coming out of a 3.5 inch tube.  It wasn’t long before some enterprising 1911 owners began putting their Commander length barrels and slides on their Officer’s model grip frames.  Gun Magazines picked up on this and began to write about them pointing out that the major problem with concealing the 1911 was the length of the grip frame not the length of the barrel.  It is this marriage of the Commander sized barrel and slide mated with the Officer sized grip frame that gave birth to “Compact” designation and it works very well.
My only complaints about this pistol are the extended beaver tail and the sharply squared butt.  When carrying this pistol in an inside the waistband holster the extended beaver tail uncomfortably digs into my massive “love handles”.  The butt of the grip is the most likely part to print through your outer garment and the sharply squared off butt on the SIG RCP will probably grab and pull your cover garment at some point when bending over or reaching upward.  While the officer’s sized grip frame does not have enough metal to allow for the bob-tail treatment that is becoming so rightfully popular on commander and government sized 1911’s it is odd that SIG did not at least round off this sharp corner.  In light of the way the rest of the pistol has been dehorned it seems almost like they missed a spot.


Sig has a reputation for making reliable pistols and this reputation continues with the manufacture of their 1911 platform.  The SIG RCS has given me no malfunctions with either ball or hollowpoint ammunition.


Well I guess if it is time to talk about accuracy it is time to look at the targets.  Along with stationary range shooting I also took the RCS through a 3 hour tactical class.  The targets will be shown below but I did not write down the drill that was being performed when each target was shot.  They all would have involved shooting while moving, sometimes beginning from a seated position.  The ranges varied from 21 to 35 feet.
1st Ten Rounds Out Of The Box At 21 Feet: 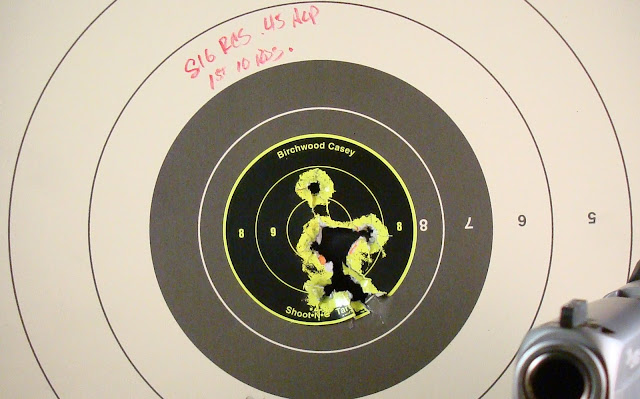 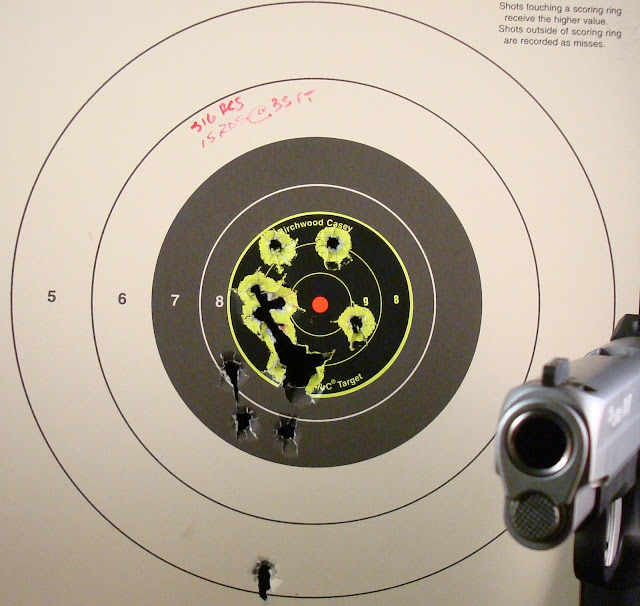 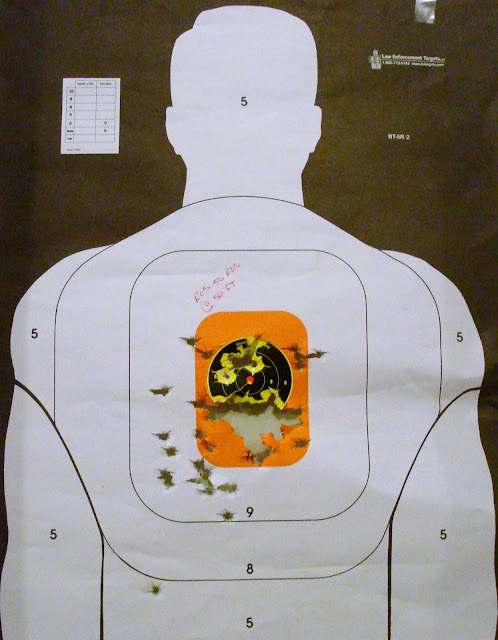 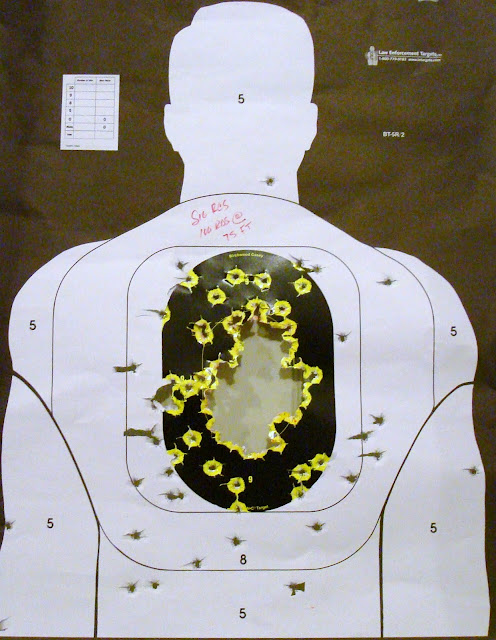 Tactical Targets (All were fired while moving from ranges of 21 to 35 feet): 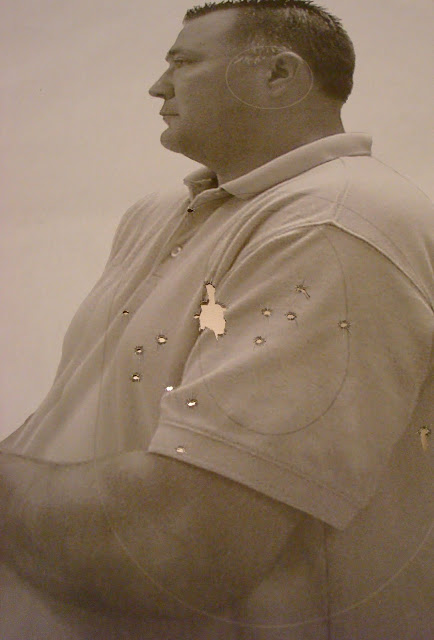 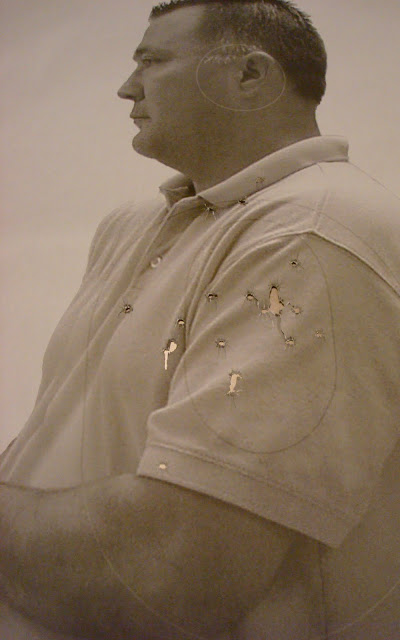 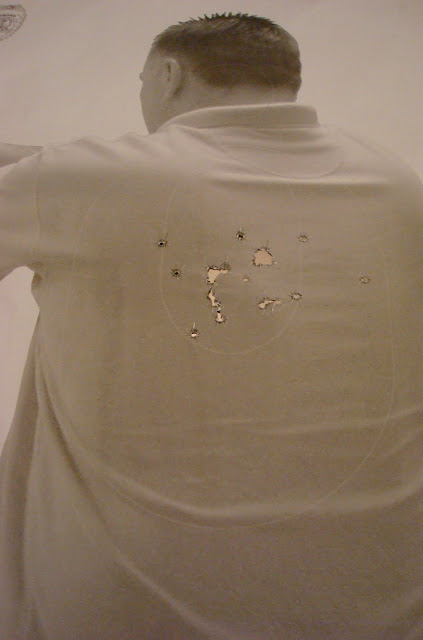 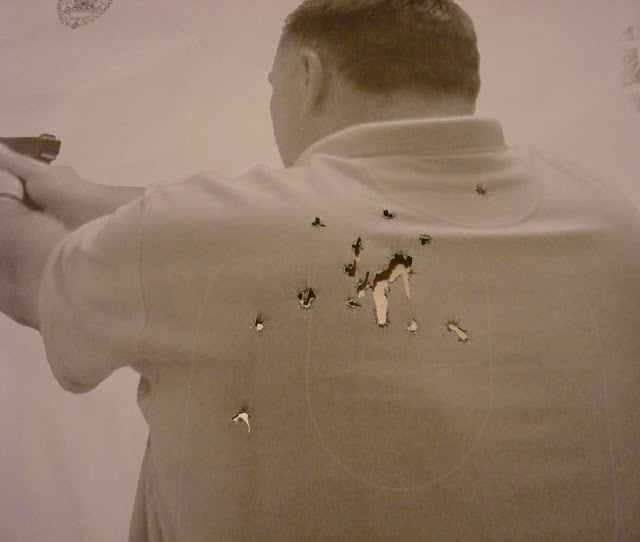 Final Thoughts
Another thing I like about this pistol is what is not on it.  Specifically two things; there is no full length guide rod and there is no oversized, aircraft carrier sized safety lever that seem to be all the rage with competitive shooters.  In my mind nothing could be more competitive than combat shooting when your life is on the line but yet these over-sized safeties are rightfully left off of combat pistols.  When I see those horseshoe sized ambidextrous safeties encircling the frame I often wonder if the owner is over compensating for something.  The standard guide plug is a welcome sight as the full length rods have never been proven to enhance reliability or accuracy.  All they serve to do is make the pistol more difficult to take apart.  Noted custom 1911 builder Ed Brown does not put them on his pistols and if the standard plug is good enough for Ed Brown I can think of no better endorsement.
As I said at the beginning, I love this pistol.  When your back is against the wall and the breaks are beating the boys this is pistol I want to have with me.
Posted by Average Joe's Handgun Reviews at 9:35 PM

How in your opinion is this different than the C3 AKA GSR that your reviewed in a previous article?
PS I have a C3 that is currently in the shop as the magazine release suddendly broke while firing a the range!
Other than that I really like this pistol
PSS Thanks for your great reviews
Al

It is exactly the same pistol except for the radical "melt job" that they did during the dehoning process. It is a little more comfortable for IWB carry with the exception of the extended beaver tail.

In a moment of weakess I let the C3 go and after missing her too much I was delighted to find the RCS.

I had a C3 'til SIG had to replace. They asked what I wanted :) and I said RCS 2-tone :)
and all I can say is it's just as as accurate and spot on of a 1911 as you can get.
Your review is awesome and I concur 100 percent on all points.
My friends laugh that I have a SIG 1911, but once they shoot her, they become an instant believer lol!

I totaly agree with every point you made. I have an all nitron rcs the only thing I've noticed is that with a kydex holster the odd shape of the slide rubs the nitron off a little , but it's not under glass it's on my right hip every day. With a 185 gr. Dpx round the recoil is mild and makes me feel nice that I can get a 3/4 in. hole at the touch of the loud button. Speaking of the trigger that's the only thing I changed on the gun I put a short sti trigger in and wow it is as close to perfect as you can get, unless you have huge mitts it works great quicker reset and shortens the pull. Anyway thanks .....Geno from Vegas

Joe,
With me being a left handed shooter if there is not an ambidextrous safety I must use my trigger finger to take the weapon off safe. While serving in the Marine Corps I had engaged in several combat situations and know that that could be fatal when seconds count. I was wondering if you had any suggestions for what I could do about the safety without looking like I am over compensating for something?

You have several options. Probably the best would be to take a look at the Kimber Compact CDP II which come with an ambidextrous safety as standard equipment http://www.kimberamerica.com/1911/cdp-ii/compact-cdp-ii
It is the same pistol except the Kimber sports a 4" instead of a 4.25" barrel and the Kimber does not have the SAS treatment. Price-wise they are simialr.

You could always have a gunsmith add an ambidextrous safety to the SIG.

Can the RCS be fitted with a Sig Short Reset Trigger?

Ps- GREAT article on the RCS!

I doubt it. The 1911 pistols uses a sliding, single action trigger. The only short reset trigger that I am aware of that is made by SIG is for their traditional Double Action/Single Action pistols which uses a trigger that is hinged at the top. SIGs customer service would be happy to help you further discuss it or talk to you about any further customization work you might be interested in making.

Can the rcs be fitted with an aftermarket skeletonized trigger? Or would have to be sent in?

My RCS came with a hollowed out trigger (shape of an hour glass). Two of the 6 RCS at the gun store had these triggers, and I bought both those guns on the spot.