Guns That Were Not Blog-Worthy
Part I of II
Average Joe tries to be objective and I have no reason to be otherwise. No one is giving me free firearms to evaluate, no one is giving me any free ammunition (although I would welcome free ammo with open arms), and no one is advertising on this blog so I ain’t beholdin’ to no nobody. I recognize that someone else may have a completely different opinion about a particular rifle, pistol, or revolver reviewed but I call ‘em like I see ‘em. In reviewing this blog I noticed that most of my firearm reviews are pretty positive about the products tested; the only exception to this was an early review of an EAA compact Witness in 10mm and the S&W Nightguard in .45 ACP that I wrote about last year. However, I realized that there were a bunch of handguns I had shot that I had not written about because I couldn’t figure out anything interesting to say or I just plain didn’t like them. Some of these handguns I still have records on but some I don’t. All of these are long gone since it just doesn’t make sense to hold onto something which you have no interest in or can’t get to work right.
So, without any further ado, here are the guns I found to be non-blog-worthy:
1. Springfield Armory Micro Compact 1911 in .40 S&W.
2. CZ 75 Compact in .40 S&W.
3. Taurus 24/7
4. Colt Lawman
5. Smith & Wesson M&P 9C
6. Kahr P45
7. Smith & Wesson M&P .45 Compact
8. Wilson CQB
Springfield Armory Micro Compact 1911 in .40 S&W
This little pistol came my way in 2004. I don’t have any pictures of it and it is no longer in Springfield’s line-up but the EMP .40 S&W is pretty darn close to looking exactly like the Micro Compact. It was a small, two-toned, pistol with a three inch barrel and Novak low-mount type sights with Tritium inserts. This was a very handy little pistol and it was also very accurate out to about 40 feet. At 21 feet I was a surgeon with it (or at least that’s what I recall as I sit here 5 years later). But the pistol had two deal-breaking problems. The first was reliability. Every magazine had at least two failures to feed. I tried different magazine (which is expensive especially when it doesn’t solve the problem) and I tried scores of different ammunition.
The second problem was something that doesn’t have a catchy name. After about 70 rounds fired the pistol would heat up and when I fired a round it would go pop instead of bang. The bullet left the barrel but the recoil felt like I was firing a .22 and it did not produce enough energy to cycle the slide. This happened with all of the brands of ammo that the range carried (Magtech, Winchester, Remington, and CCI Blazer and Lawman). Neither I nor the gunsmith could figure out what was causing it. Whenever it would start the gunsmith would come out and observe what was happening. He would then tote her off to his shop, take her apart, find nothing wrong, put it back together and the pistol would shoot fine until it started to heat up again. So this one left the pack to find a new home and I hope someone more deserving picked her up and learned how to make her work.
CZ 75B Compact .40 S&W 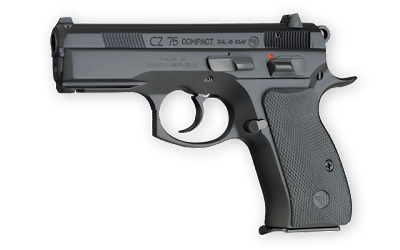 This one came about a year later. At this time I had a full sized CZ 75 B, a 75 Compact D PCR, and a P-01, all of which were in 9mm. I loved the CZ design so I figured a .40 was a perfect compliment. The accuracy was exactly what I expected but unfortunately it also had reliability problems. Again I tried different mags and a variety of different ammunition but all to no avail. The gun continually jammed. Sometimes they were failures to feed but mostly they were the dreaded double feeds which just locked up the pistol. I had to force the slide in to the locked position and rip the magazine out with great force. Unfortunately this experience, along with the above mentioned Springfield left me with a sour attitude toward the .40 S&W cartridge and to this day there is not another one in my battery. (Although there is a Talo Glock 23 in .40 S&W in the display case that might tempt me into giving the .40 another chance http://www.taloinc.com/glock.htm)
Taurus 24/7 in .45 ACP 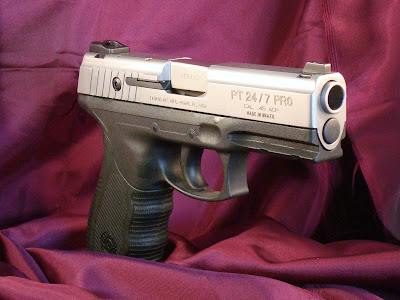 I found much to like with the Taurus OSS in .45 ACP, but it was a full sized service pistol. Thinking that smaller versions would be good for carry I acquired the 24/7 .45 ACP in both its 4 and 3.25 inch versions. The trigger was different but very similar. As it turned out the pistols were a little wide for concealed carry. They proved to be reliable and had about the same accuracy level as the OSS.
Target at 21 feet. 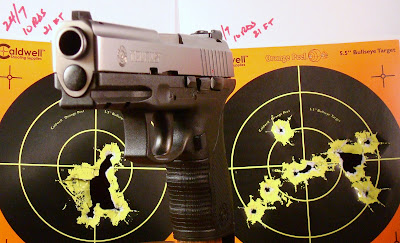 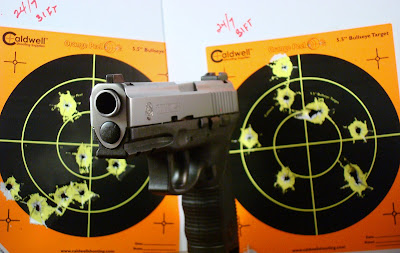 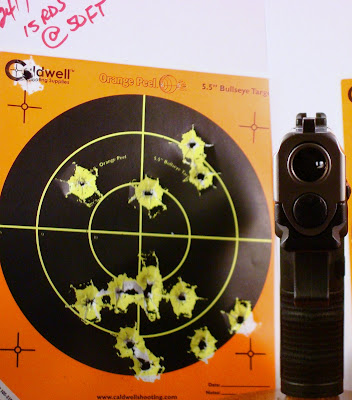 Target at 21 feet and fired using the Jim Cirillo method of indexing using the rear sight profile in close quarters when you do not have the time to line-up the sights. 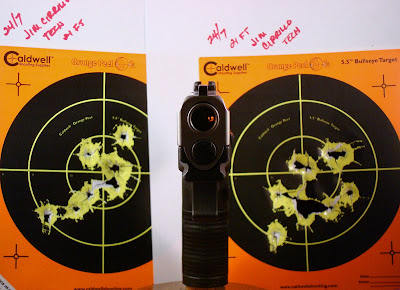 I did not blog about them because I just couldn’t think of anything new to say that hadn’t already been said in the OSS review.
Colt Lawman 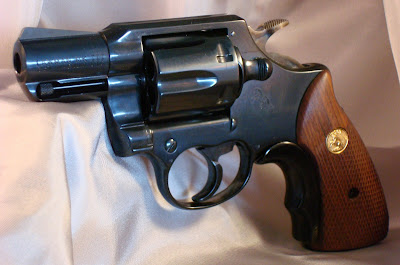 When I first became of age to purchase a handgun I would marvel at the Colt revolvers in the display cases. They seemed to have a richer, deeper blue than the Smith & Wesson products and there was something about the Colt Lawman .357 Magnum revolvers with a 2 or 4 inch barrel that seemed to call to me. The Lawman was certainly no Python, it even seemed to lack some of the refinement of the Colt Trooper, but it had a massive steel barrel and looked like it was all business. I imagined that looking down the wrong end of the barrel would be pretty intimidating. But Colt discontinued the Lawman in the 1980’s so there did not seem to be one in my future.
But Lo and Behold, one bright Sunday afternoon I stopped in at Gander Mountain to pick up some ammunition and there was a Colt Lawman Mark III .357 Magnum with a two inch barrel in 98% condition with box and papers.
The first thing I found while dry firing with snap caps was that, as with most revolvers (especially vintage ones), the stock grips did not enhance the shooting experience. I surmised that if they were bad for dry firing they were going to be many times worse with .357 Magnum cartridges launching from that 2 inch tube. I knew that not much in the way of aftermarket grips would be available, but I did have a Tyler T-grip adapter on hand to give me more to hang onto. The T-Grips adapter was also was a period correct accessory for the vintage Lawman.
However, even with the T-grip adapter, the Lawman was not fun to shoot and I eventually realized that it was not making it into the range bag whenever I ventured out to the shooting range. Below are some targets all shot at 21 feet using a variety of .357 magnum ammunition.
30 rounds of Remington .357 Magnum 125 grain Jacketed hollowpoint ammunition: 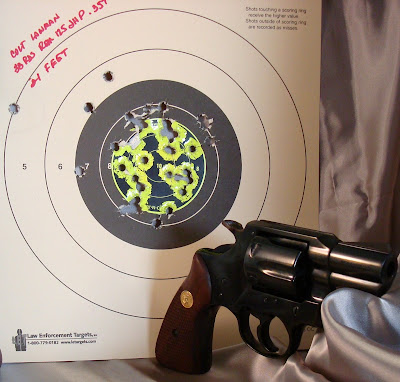 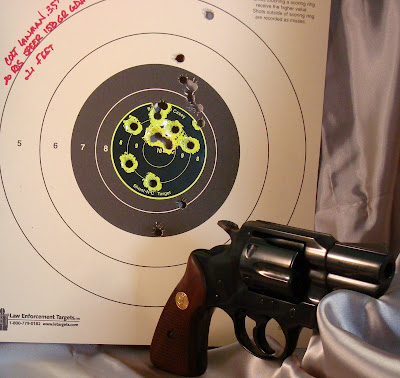 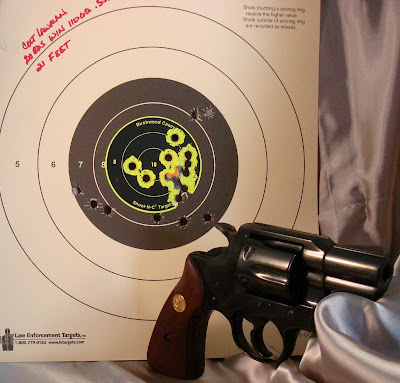 Unfortunately the Lawman did not make the cut for either “shootability” or inclusion in the blog and is now in someone else’s collection.
Part II Continued Below

Good writing and photos! I really like this site.

Anonymous said...
This comment has been removed by a blog administrator.
11:47 PM