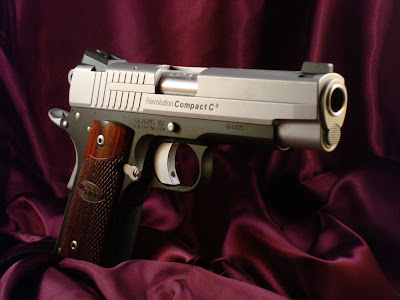 Here’s the thumbnail review for 1911 haters or those who don’t have time to read the review: SIG got it right.


Now, if you want to know more, read on.

The 1911 model pistol in .45 ACP is just 3 short years shy of its 100th birthday and going stronger than ever. For most of the last century if you spoke of a .45 you meant a Colt. Aside from some Spanish copies that would get you laughed out of any respectable shooting range Colts were about all you had to choose from. Up until my junior year of college (1978) my only handgun experience had been with revolvers. Every police department that I knew of carried them and that seemed good enough for me; besides anything with the Colt name on it was way, way outside of the price range for a common college student. My interest in Colts, the 1911 in particular, changed when I met my next door neighbor. He had a Blued Colt Combat Commander .45 ACP, a Colt Python .357 Magnum, and a Smith & Wesson Model 57 .41 Magnum and an S&W Model 66 .357 Magnum. He was a handgun god as far as I knew. He had two Colt handguns that I had only read about and thought I would never be able to afford, he had the big N framed Smith & Wesson .41 Magnum that looked like the gun Dirty Harry sported in the movies, he had the stainless steel Model 66 which was as scarce as hen’s teeth in 1978. My neighbor belonged to the local gun club and occasionally would take me and my puny Ruger Single Six .22 LR/.22 Magnum along. His heavy duty revolvers were OK, but the Combat Commander really got to me. It was a blast to shoot and more accurate then I had expected. Back in those dark ages most of the magazines I read had given me the impression that the .45 was over-powered, inaccurate, and unreliable. In the pistol matches we watched at the gun club revolvers ruled the roost and there was nary a semi-automatic in sight. The silhouette matches were ruled by N framed Smiths and Ruger Super Blackhawks and the PPC championships were full up with Smith K frame revolvers and the occasional Colt Python.


It took me a year, but by carefully saving I purchased a brand new nickel plated Colt Government Model with beautiful walnut grips. It didn’t have the balance of the Commander but it was a knock-out. Fast forward three years and I sold it to a Cook County Deputy Sheriff when I was low on rent money. But I never forgot the lure of the .45.


The years went by and so did another Colt, a .45 ACP Combat Elite was bought and a few years later sold when I was low on mortgage money. Suddenly I began to notice that Colt pistols were not to be found on gun shop shelves. The stores began to fill up with Beretta, Smith & Wesson, and eventually Glock 9mm pistols. The military and police departments began shifting to high capacity 9mm pistols so I understood why gun dealers were stocking them in sufficient quantities but the Colt 1911, enhanced by custom gunsmiths, had begun to blossom on the competition circuit—there was still a clear market for them.


Then, in 1997, something wonderful happened: Kimber began producing semi-custom 1911 pistols in all different barrel lengths and frame sizes. They were expensive but they included all of the goodies that people were spending hundreds of dollars for custom gunsmiths to put on their Colts. Match grade barrels, adjustable target or 3-dot combat night sights, lowered ejection port, ambidextrous slide safety, beavertail grip with memory bump grip safety, checkered front and back strap, full length guide rod, custom finishes, and exhibition grade grips and on and on and on. Soon Springfield got into the custom- production 1911 market. Para Ordnance expanded and improved their lines. Not long after that Smith & Wesson, the King of Revolvers, rocked the gun market by unveiling their version of the 1911 (and a darn good one at that). Then, in 2004 SIG got into the act with the GSR 1911. The GSR stands for Granite State Revolution. Granite Stated undoubtedly stands for New Hampshire where they located their U.S. factory. I’m not sure about the significance of the “Revolution” part. One article I read surmised that it was in reference to New Hampshire’s role in the 1776 American Revolution. I have not heard an explanation from SIG but my assumption is that they are referring to their own revolutionary rendition of the 1911. All of that lead us to the subject of this review.


When I saw the Revolution C3 (which stands for Compact, Concealed Carry) I was struck by it. I had been eyeing the new Kimber SIS pistols but was drawn back to the C3. 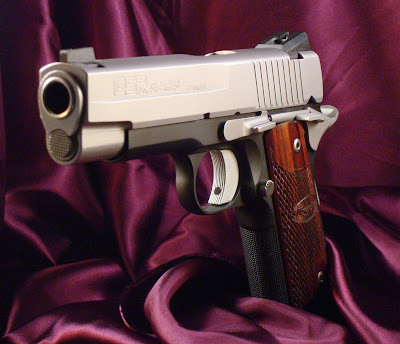 It is certainly a good looking pistol but it also looked like it would be well balanced, shootable, and compact enough to carry. It was expensive and I dared not handle it as that might have sealed the deal and further burdened by indebtedness to the Master of Cards. It took me three weeks to figure out the financing. Trade two no longer needed .357 revolvers and fork over just a pinch of cash. I triumphantly returned to Gander Mountain made the deal and handled the C3 for the first time. It is a Commander length barrel/slide (4.25 inch barrel) sitting atop an Officer’s frame (shorter than the full sized Commander). All of this means that the pistol is shorter in height and length than a standard sized 1911. The balance was awesome and the grip fit my hand well. Another centimeter shorter and the grip of my little finger would have been in jeopardy.


Before going any further, here are the specifications for the pistol:

Shooting the C3 was a real joy. Prior to loading it up I have been firing a Glock model 36 .45 ACP with a compensated barrel for another review in a couple of weeks. I was quite happy to find that the recoil of the SIG was much less than that of the compensated Glock. Follow-up shots came easy due to the mild recoil and the checkering of the beautiful grips and the checkering on the front and back strap kept my grip in place; the pistol did not shift in my hand during recoil which would have required me to adjust my hold.


It almost seems to me that SIG reverse engineered the Kimber and Springfield pistols. They included some of Kimber and Springfield’s better features (match grade barrel, alloy frame, etc.) and left out those that got in the way and were inconvenient. The slide safety is slightly larger than a standard Colt safety and the C3’s is only mounted on the left side; there is no hideously large ambidextrous safety getting in the way of things. Also not included is a full length guide rod, double recoil springs, and coned barrel or standard sized barrel with an overly tight bushing. I was very pleased to see the standard recoil spring and bushing as it makes field stripping a breeze and does not make the pistol less accurate than those burdened with the lengthy guide rods, double springs, and tight barrel bushings. No bushing wrench was required to remove the bushing. This is one of the reasons that I don’t fire my Kimbers very much; they are a pain to disassemble and put back together. Also gone, and unnecessary, is the ultra light trigger pull. Many of the 1911 on he market put a 3 to 3.5 pound trigger pull which in my opinion is just too light to be practical for a carry weapon. The SIG pull is 4.5 to 5 pounds and it is right on for me.


One other thing is rather minor but I did notice it. When cleaning the slide I found that I could not get my whole, fat finger inside it. This is unusual for a 1911 so I got out the calipers and found that SIG had found a way to make the slide thinner. The specifications state that the width is 1.37 inches but that was measured at the grips (and they are easily changed to provide a thinner or fatter hold if you prefer). The C3's slide measured .86 of an inch and my Kimber, Smith & Wesson, and Ed Brown all measured .93 of an inch. Barely noticeable, probably has no affect on the pistol’s operation but it is there.

The first several targets were all set at 21 feet and the ammunition used was Remington UMC 230 grain FMJ: 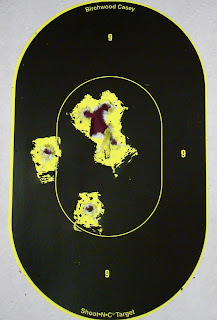 These were the first two magazines (7 rounds) fired from the C3. 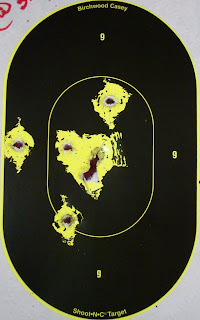 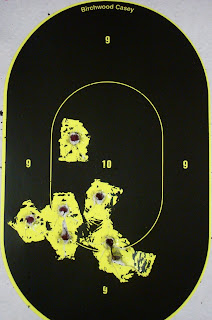 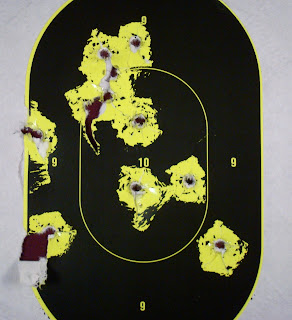 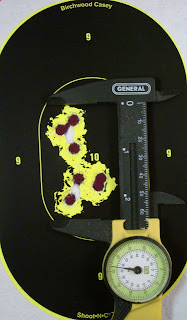 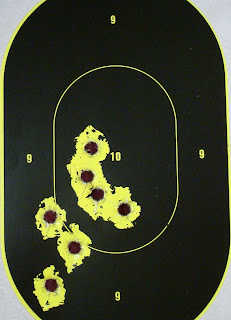 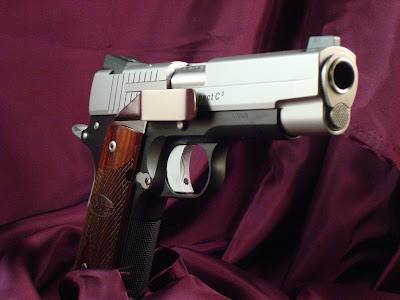 I was only able to put 91 rounds through the C3 today. During that time I had one failure of the slide to return all the way. I am pretty sure that I was carelessly limp wristing the pistol due to its mild recoil. By now you have probably figured out that I like the C3 a lot. So much so that I have bestowed upon it the prestigious Clip Draw attachment award. Yes, I know that it kind of detracts from the beauty of the C3 but no greater honor can I imagine than to say that I will bet my life on this pistol.

Update
Upon carrying the Revolution C3 I determined that the concealability of the piece would be improved with some slimline grips. This was certainly not an easy decision to come to as the grips provided with the pistol are very attractive. Once I made the decision to go with slimline grips the decision about who to go to was an easy one. Esmerelda O'Sheehan makes some downright gorgeous grips and takes a backseat to no maker in the business. She also has the talent make a line of very slender grips with the same artistic checkering that goes on the full size grips. The set seen below is both beautiful and utilitarian. They have reduced the size of the grip from 1.4 inches to 1.18 inches. 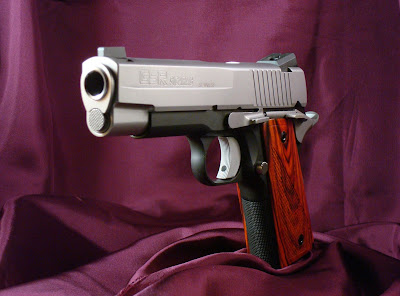 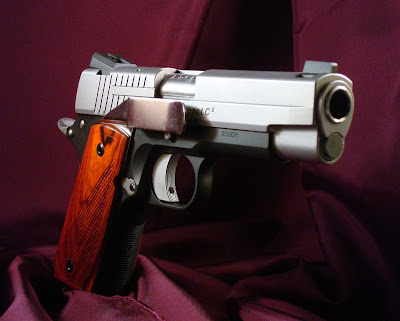 Range Time With The New Grips 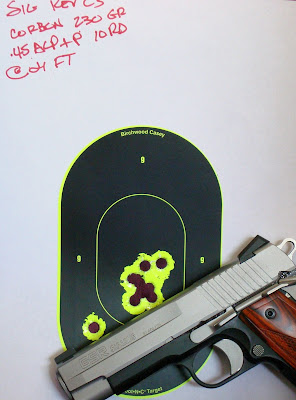 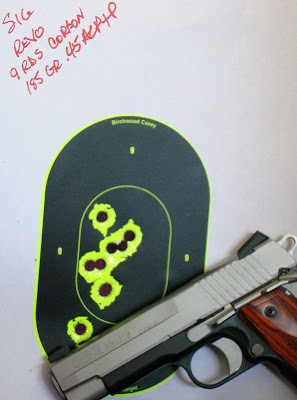 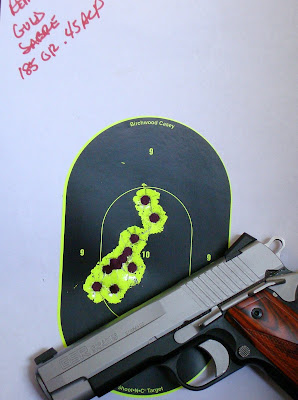