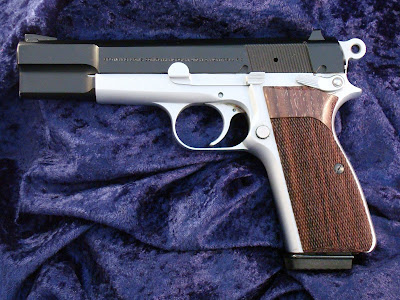 Legend has it that the Browning Hi-Power was born after World War I when France desired a large capacity service pistol. European handguns had traditionally been small caliber affairs that were more a badge of honor than an actual combat arm. It is very easy to imagine that the confines of WW I’s trench warfare demonstrated the woeful inefficiency of small handguns chambered for underpowered calibers.

At the outset of the Great War France supplied their troops with the Lebel Pistole Revolveur Modele 1892 which chambered six rounds of 8mm ammo weighing 102 grains which exited the revolver at just under 700 feet per second supplying a mere 126 foot pounds of energy.

In the second year of the war France needed more handguns and selected the Ruby pistol which was a less expensive copy of the Colt Model 1903 Pocket Hammerless. 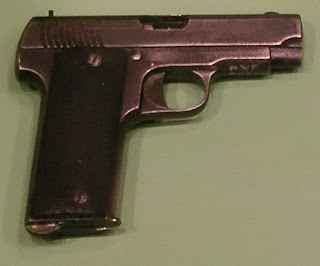 The Ruby was produced in 7.65mm (.32 ACP) firing a 71 grain bullet at 904 feet per second that provided 129 foot pounds of energy. Contrast this to the .45 ACP round that Uncle Sam brought along which fired a 230 grain bullet traveling at 975 feet per second and provided 421 foot pounds of energy or about 4 times the knockdown power of the French side arms. The .45 ACP pistols and revolvers fielded by the U.S. Expeditionary Forces performed so well on the battlefield that General John “Blackjack” Pershing wanted every doughboy to be equipped with one.
The French turned to John Moses Browning and the Fabrique National factory in Belgium to design and produce the new service pistol. The story continues that Browning was determined to improve upon the venerable Government Model 1911 that he produced for the U.S. armed forces. The Hi-Power remained a hammer fired, single action pistol with a frame mounted manual safety, slide stop, and magazine release. Gone however, was the grip safety which had been a requirement of the U.S. mounted cavalry. Browning also designed an improved barrel link doing away with the 1911’s swivel link and replacing it with a fixed cam which made the barrel bushing obsolete. This was a great improvement as it made field stripping the pistol much easier as there were two fewer pieces (barrel bushing and recoil spring plug) to keep track of. The trigger was also redesigned and given a revolver style lever type trigger rather than the straight bar-type trigger on the 1911. The Hi-Power was produced in two models, a fixed-site version and a tangent site adjustable out to a very optimistic 500 meters. The later version was adopted by some artillery units of the Third Reich which issued them in a wooden holster that doubled as a shoulder stock.
Browning died in 1926, 9 years before the final version of the pistol was brought to the market in 1935 and the lines are somewhat blurred as to what features of the pistol were solely Browning’s and which were due to the influence of Dieudonne Saive, Browning Chief Engineer, who took over the project after Browning’s death.
For reasons unknown, France did not adopt the Model 1935 or Hi-power, as it has become more commonly known. This did not hurt Fabrique National as many other countries had lined up to purchase it including India, Austria, Australia, Argentina, Ireland, Luxembourg, Israel, Singapore, Venezuela, Malaysia, Rhodesia, and Finland . After the Nazis captured Belgium, they began arming their troops with the Model 1935. Prior to their occupation the pistol’s blueprints were smuggled to Canada when the John Inglis Company produced it for the Armed Forces of Canada, Great Britain, and China. The Hi-Power remains a mainstay in military and police inventories to this day. 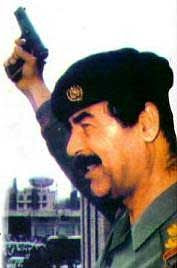 Sadly, it appears that it was also the favored side arm of Saddam Hussein who was frequently pictured with one.


The 13 + 1 capacity of the Hi-Power made it a hit with police officers as it was the only high capacity pistol on the market for quite awhile until Smith & Wesson bested the Browning with the 14 + 1 capacity of their model 59 which debuted late in 1970. In the early 1980’s when six shot .38 caliber revolvers were the overwhelming choice for our nation’s finest, I worked on the Southwest side of Chicago and I would have to say that the two most popular back-up guns for the patrolmen in the 10th District was either the Colt Detective Special or the Browning Hi-Power.
The specimen being reviewed here is a discontinued model dubbed the Hi-Power Practical. It sports easy to see fixed sights which have three unique white bars rather than the three dots found on most modern pistols. 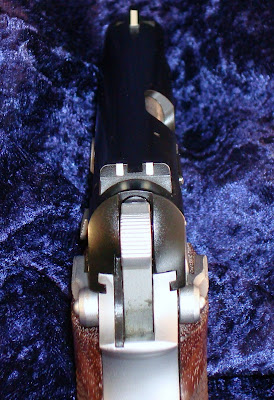 I really tend to like these as they are easy for my aging eyes to pick up. The pistol also has a brushed chrome alloy frame with a high luster blue-black slide. The pistol originally came with Pachmayr rubber wrap-around grips we which were very nice, but not as nice as the Walnut Checkered grips from Hogue that you presently see on the pistol.
This pistol is beautiful and an ergonomic wonder; especially since it was produced before ergonomics blossomed into the uber-concept that it is today. I have never met anyone who picked up a Hi-Power and didn’t remark that is felt very good in their hand; the contour of the grips and the balance of the pistol is superb. Being that the magazine is a double stack it is larger than the Colt 1911 but not significant to the point that most people cannot handle it. In fact in most circles it is thought of as a slender and easily concealable pistol.
How She Shoots
The Hi-Power has had some reported trigger issues throughout its run, however I have never handled one that I considered bad. This specimen runs extremely smooth and provides great accuracy as demonstrated in the two targets below. The target on top was hit with 30 rounds of Remington UMC 115 grain FMJ ammo fired at a distance of 21 feet. The target on the bottom absorbed 50 rounds of the same ammunition at a distance of 31 feet. 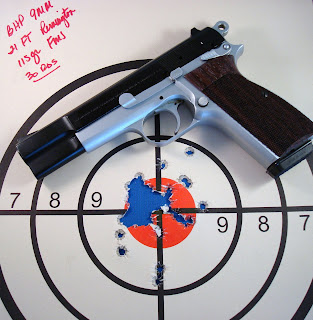 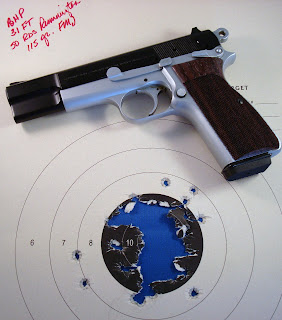 In the 1970’s and early 1980’s the Browning Hi-Power acquired quite a following which began to wane in the mid 1980’s as the military, police, and civilian gun buyers became enamored with the Double Action Beretta 92. However, the Browning Hi-Power still has a lot to offer the public and I hope to see a resurgence in its popularity sometime soon.
Posted by Average Joe's Handgun Reviews at 7:21 AM