“Snakes, why did it have to be snakes?” So uttered Harrison Ford as the character “Indiana Jones” in Raiders of the Lost Ark”. Snakes are perhaps the most mystifying and feared creatures put on this earth. Some say it is due to the story of the Adam and Eve and their expulsion from the Garden of Eden. However, I think that even without the biblical symbolism of the forked-tongue reptile tempting Eve, the snake would still be much respected and much feared. There are small snakes that have poison strong enough to drop an elephant and there are the large constrictors that can swallow huge animals. For some reason someone in Colt’s marketing department had such a fascination with snakes that they named several lines of handguns after them; the .44 magnum Anaconda, the premier .357 magnum the Python, the more affordable .357 the King Cobra and the .38’s; the Cobra, the Viper, and the subject of this review, the Diamondback.


11 years after the venerable Colt Python debuted, Colt introduced a scaled down version in .38 Special called the Diamondback. The Diamondback was manufactured for 20 years from 1966 to 1986 with barrel lengths of 2.5, 4 and 6 inches and offered in blue or nickel finishes. Unlike the Python which only came in .357 Magnum (OK…there was a very, very small run of a target models chambered in .38 Special with longer barrels—but it was a special run and they are very rare) the Diamondback could be had in .22LR or .22 Magnum along with the .38 Special model. The Python was a large and very strong .357 Magnum with adjustable sights and sported a very distinctive ventilated rib atop the barrel and a lug running the full length under the barrel. The Python was said to have had a factory hand-tuned action which made it very expensive; in the late 1970’s they were running upward of $800 which was one month’s net income for me at the time. The Python was also rather heavy at about 2.5 lbs for one with the popular 4 inch barrel.

The Diamondback maintained the strong profile of the Python including adjustable sights and complete with the vent rib and full barrel underlug. It was manufactured on Colt’s small “D” frame, the same frame as their very popular Detective Special and Police Positive, was much lighter than the Python at a mere 1.8 pounds, and was about half the price of its.357 magnum big brother. I always felt that the Diamondback was the less expensive alternative for the person who could not afford the Python.


Snake fever bit me about a year ago when at one of the Boise gun shows an attendee was exhibiting his collection of pristine Colt double action revolvers. Most of the collection was Pythons, but there amongst the magnums were a few Diamondbacks. I have always liked their looks but have never owned one. I think their smaller frame is a better fit for my hands and their distinctive look rates high on the cool meter. Although I do not have official Colt manufacturing numbers, I would expect to find out that Diamondbacks were produced in much fewer numbers than Pythons. For several years there was only one to be found at the Boise Gun Show. It was a 4 inch .22LR done up in matte nickel and fully (and beautifully) engraved. The owner must not have wanted to part with it as he seemed to raise the price about a $100 each year and I think it was going for $2,300 about the time I departed Idaho. While it was certainly desirable, it was an investment piece, not a shooter and I take my enjoyment in shooting my handguns.


The first Diamondback I picked up was a blue steel .22 LR which is now sporting incorrect Colt Viper grips. When I bought the revolver it had faux ivory grips which were very heavy on the “faux”. They did not look good and were of the slim variety that Colt was putting on their early service revolvers. They did not fit me well so I took them off and installed another set coming from my Colt Viper. These grips were too small for the recoil of the .38 Special Viper, but worked like a charm on the Diamondback .22 LR. The original owner was a hunter and took this revolver afield; while it is in good shape it does show some holster wear at the end of the barrel. I tried many different brands of ammunition but did not get as good of results as I had expected. Sometimes when I am finding an accuracy problem with a vintage handgun I try to think back and recall what the ammunition standard was at the time the gun was manufactured. The hyper velocity Federal and CCI cartridges available today were not around in 1966. My local gun shop had a good supply of Winchester Wildcat lead round nose ammo so I picked up a box. As you will see from the last target, problem solved. 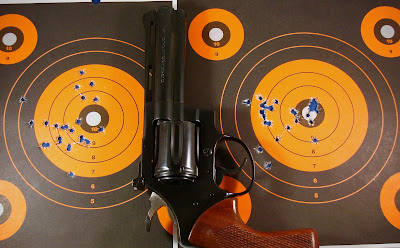 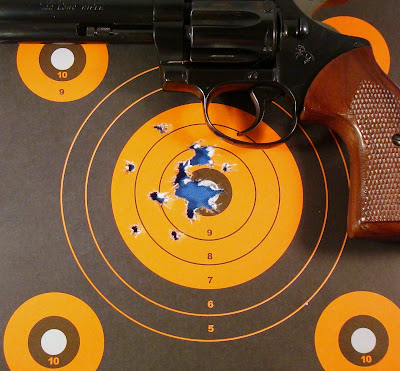 At my final Boise Gun Show I spotted a table with a blued .38 Special Diamondback sporting a beautiful set of Hogue checkered and finger-grooved grips. While these grips are great looking, they are rather small for my hand. This revolver is also not really as accurate as expected and the grips may play a role in that problem. The original owner also took this gun afield and although the grips are in great shape, the finish shows some wear on the barrel. 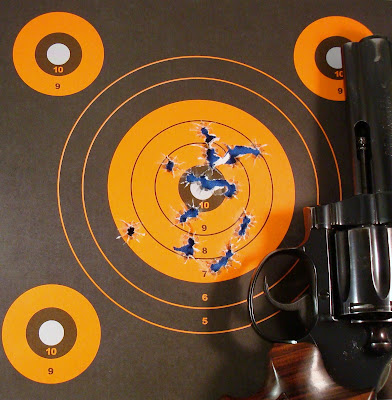 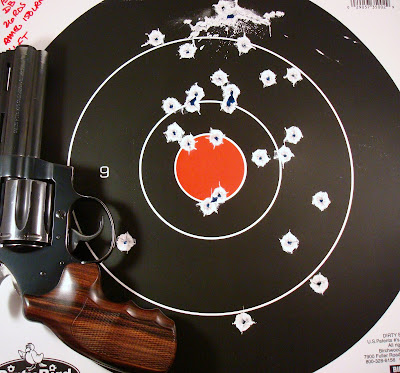 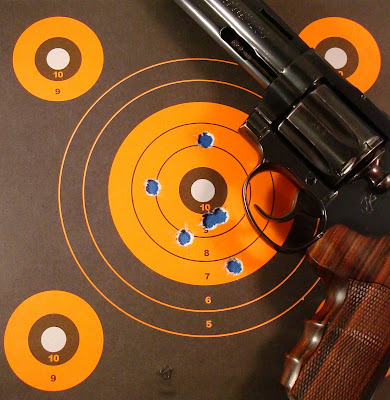 
After moving to the Minneapolis area I ventured to the Cabela’s in Rogers, MN and stumbled upon a 4 inch barreled, nickel plated Diamondback. The revolver showed no sign so having been shot; there was no carbon discoloration on the front of the cylinder or around the forcing cone. Had there been signs of use it would have been acceptable, however the abuse evident on this revolver was inexcusable and I hope the State of Minnesota pulled owner’s handgun permit. Around the cylinder and on one side of the barrel the finish was appallingly stained. This was a shame as the revolver was in LNIB condition but something had spilled on it and had not been cleaned off right away. The salesperson said that they had not tried to remove the stains so I took a chance on it. I was delighted to find that a little Flitz polish reduced the stains by about 85%. Someday I will get around to attacking the stains again to remove the remainder. This model wore a great looking of oversized Colt Target grips.


Unfortunately these grips are too large from my hand and requires that I reposition my hand after each shot. Nonetheless, this revolver showed pretty darned good accuracy with 158 grain lead round nose ammunition. 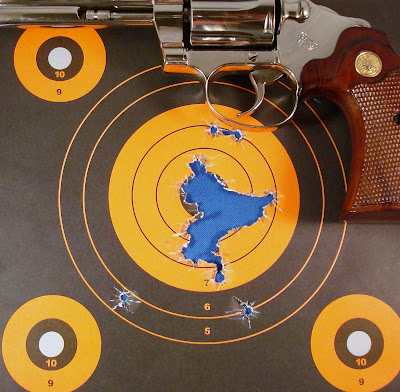 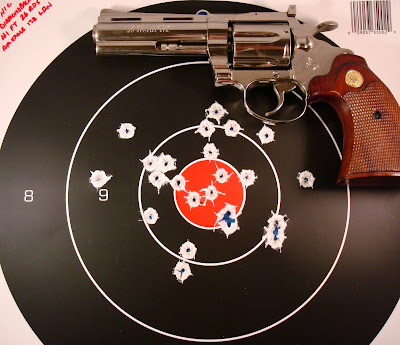 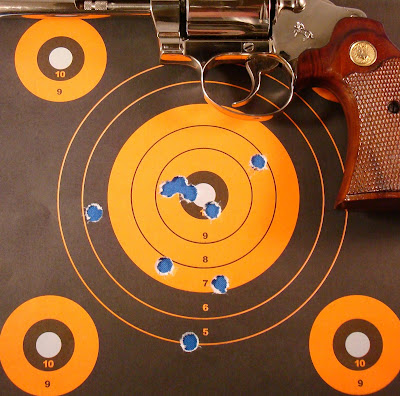