The bad experience I had with the Glock 21SF (see the October 28th posting) sent me running to the nearest gunshop to trade it in for a handgun that would produce more acceptable results. My appreciation for the S&W Model M&P 340 CT and the results I received when I fired the little J-frame with .357 Magnum ammo (see the October 18th posting) gave me the idea to look for a larger, but still lightweight .357 Magnum; something that would offer very good performance without the masochistic tendencies of a small 13 ounce scandium frame revolver. The S&W Model 386 Sc/S answered the call. The 386 is built on Smith’s medium sized “L” frame and has a capacity of seven rounds (2 more than will fit in the small J frame).
When the .357 Magnum cartridge was first developed it was the most powerful handgun round in existence and Smith & Wesson naturally chose the “N” frame, their largest and strongest revolver, as the platform for this robust offering. The S&W .357 N frame revolver was extremely popular with hunters as well as law enforcement officers. This powerful, new cartridge was released in the mid 1930’s at a time when the needs of law enforcement was changing. The criminal element was using the automobile to increase their mobility and the criminal justice system struggled to adapt. The country’s legislative body needed to standardize criminal law and come to a remedy for the constraints of individual state jurisdictions as police officers in hot pursuit were required to cease the chase at the state line. The police also needed new hardware. The automobiles in those days were stout and hearty vehicles made of good USA steel, the plastics and fiberglass of today were not in use, and the standard .38 Special bullet carried by most officers did not penetrate well. The .357 Magnum, however, could penetrate a car’s hood or cowl and take out a radiator with ease. If the car was moving slow enough and the officer’s skill was good enough the .357 was easily capable of penetrating the driver’s door and ending the escape. In most cases it could shoot through the trunk continuing on through the backseat and front seat maintaining enough “oomph” to earn the undivided attention of the driver or passenger. And while it is probably a stretch to say that it could penetrate the hood and go right on through the engine block it is certainly safe to say that the magnum round could make its way through the hood and wreak havoc with the motor & other key engine components.
The downside was the weight of the N frame revolver. The 4 inch barrel N frame weighed about 43 ounces. The police officers who wore the handgun for 8 or more hours requested something lighter and in 1957 Smith & Wesson chambered their medium, or K, framed revolver for the .357 Magnum. The K frame .357 (dubbed the Model 19), over an extended period of time, did not hold up to a steady diet of the powerful .357 ammunition. I tend to think that this problem was somewhat exaggerated, but nonetheless in 1980 S&W released their L Frame. I am sure that part of the reason for the development of the L frame could be attributed to the fact that the main competition to the K framed .357 was the Colt Python. The Python was renowned as the premium .357 revolver of the day and supposedly was stronger than the S&W model 19 even though the Python weighed only a scant 2 ounces more than the 36 ounce Model 19. One of the prominent features of the L frame revolver was the underlug which ran the full length of the barrel…suspiciously just like the Colt Python. 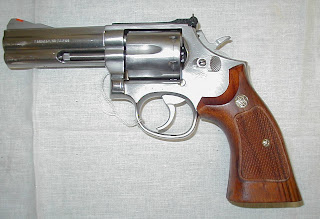 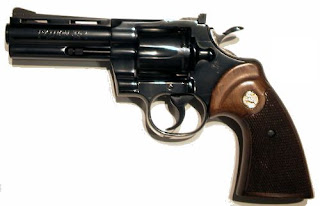 Certainly one of the positive features of the L frame is that Smith & Wesson engineers have found a way to stuff an extra chamber into the cylinder giving the L frame a seven round capacity. This model 386 also has the abbreviations “Sc/S” in its title which stands for Scandium Frame with a Stainless Steel cylinder (which has been manufactured with the same matte black finish as the scandium frame). The Scandium/Stainless Steel combination gives this revolver a weight of 21.2 ounces making it a lightweight but not a featherweight such as the 13 ounce model 340. The revolver is topped off with a red ramp inserted into the front sight and an adjustable rear sight that is outlined in white. The 386 sports a 2.5 inch barrel and for all practical purposes looks just like the 2.5 inch blue steel model 19 that was a mainstay with detectives and off-duty police officers for over 30 years. 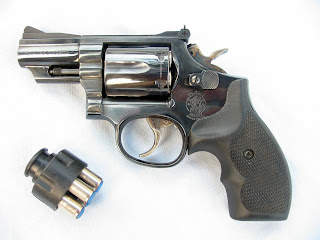 (Smith & Wesson Model 19 with a 2.5 inch barrel)
In fact the 2.5 inch model 19 was the handgun that protected the President of the United States for many years. Look closely at the two photos of the aftermath of the assassination attempt of President Ronald Reagan by John Hinckly and you can clearly see one of the Secret Service Agents holding his model 19 snubby. 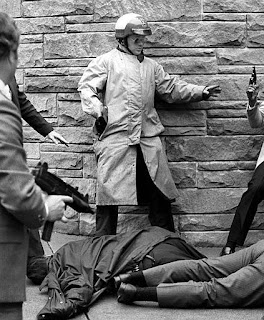 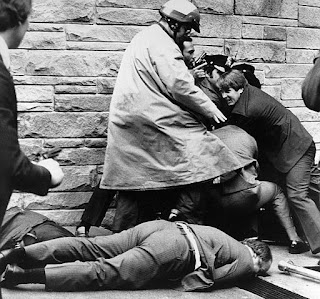 Shooting Impression
In a word; good. My main purpose was to find a small lightweight revolver that was capable of accurately and comfortably firing the .357 Magnum round. This is it! Now, while it is light weight, it is by no means pocket-sized. The 386 will require a holster or some sort of supported carry. One of the things that I am pleased about is the trigger pull. For several years Smith & Wesson was putting terribly heavy trigger pulls on their revolvers undoubtedly to avoid the risk of accidental discharge liability claims. While I do not have a trigger pull scale I would guess the 386 to be in the range of about 8 pounds and the pull is very consistent and smooth all the way through the action of shooting. I did not find the 386 to be difficult to handle despite the power of the full-house magnum ammunition I was firing. This is certainly largely due to the synthetic Hogue grips which fit the revolver and my hand very well and cushioned a lot of the stout recoil. I was very impressed by the accuracy of this little revolver as these targets will attest.
The first target was placed at 21 feet and fired at with 50 rounds of Magtech 158 grain jacketed soft point .357 ammunition. All of the rounds fell within the 5 inch target with most landing inside the 9 ring. 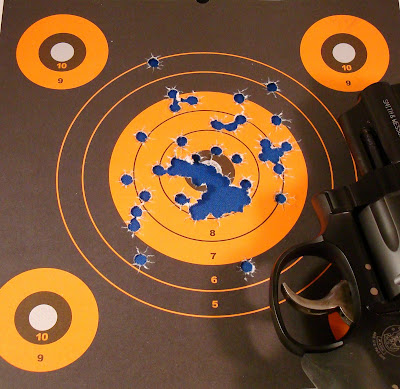 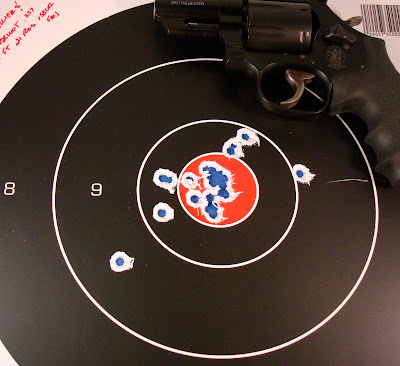 This target was moved back to 35 feet and fired at again, with the Magtech .357 ammunition. 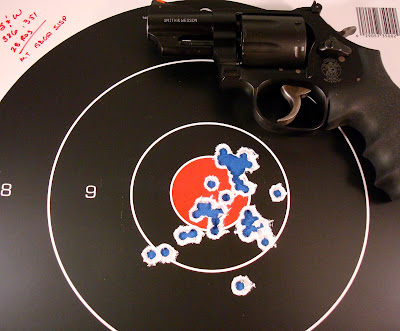 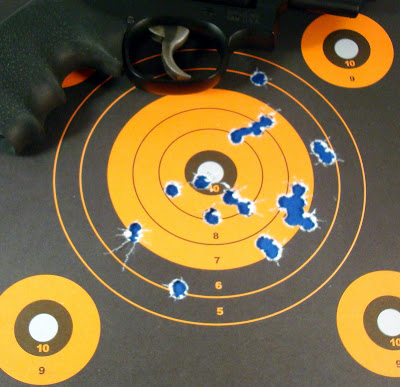 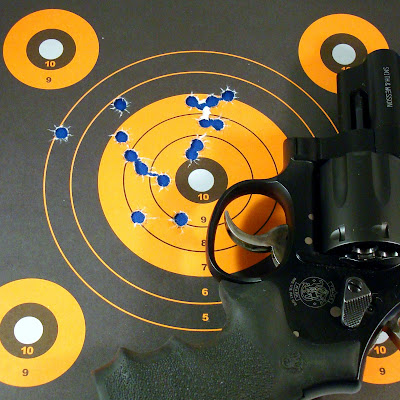 I decided to try some of the expensive Magsafe ammunition. Magsafe is reputed to be a very safe and effective round. It is basically a copper hollow point that is filled with small shot rather than lead (the shot is epoxyed into the hollow cavity). This makes it a lighter, faster round that expends its energy very quickly. It hits hard but is very unlikely to over-penetrate and hit an innocent bystander and it will break up upon hitting a solid object like sheetrock walls. This makes it very safe for home use—if you miss your target it will not penetrate your wall and hit someone sleeping in the next room. The downside of the Magsafe ammunition is price. It runs about $2.00 a round with a package of eight going for $16.00. In terms of performance; the 70 grain .357 Magnum hollow-point rockets out of the barrel at 1860 feet per second producing some 538 foot pounds of energy with very, very little recoil. As expected, the lightweight bullets do tend to shoot low as seen in this 21 foot target. Unfortunately it is not a terribly practical round as the expense means that most shooters are not going to spend the money to practice extensively with it. 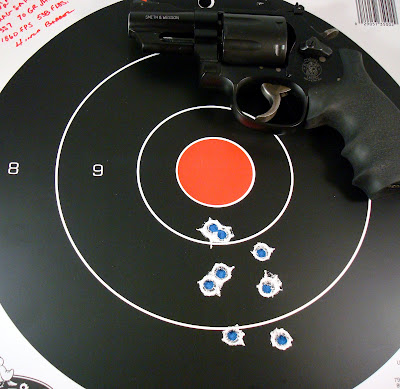 The best defensive ammo performer of the day turned out to be the CorBon 140 grain jacketed hollow-point. The CorBon 140 grain .357 Magnum is rated as 1325 feet per second with 546 foot pounds of energy. As shown in this 21 foot target, six of the 11 rounds fired are all touching one glorious round which centered the bullseye. 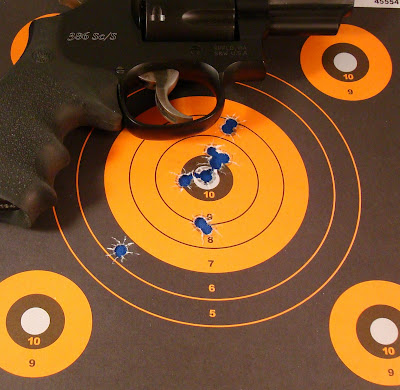 This revolver is certainly recommended for its lightweight and superb performance in a very hot caliber.
Posted by Average Joe's Handgun Reviews at 10:50 PM