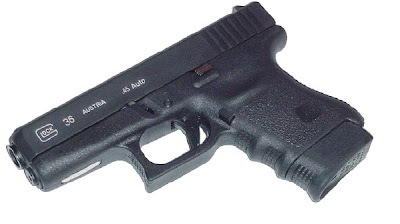 Most everyone who knows me understands that I am not much of a Glock fan. This is a shame since I do feel that they are very reasonable pistols; they are reasonably affordable, reasonably reliable, and reasonably accurate. However, to me, they have not been reasonably comfortable. The problem is the grip. The angle is too severe, the grips are too wide (due to their double stack magazines) and the front to back length is too long.
A few weeks ago Marc showed up at the range with his Beretta 9mm and his baby Glock in .357 Sig. I shot the Glock and thought “hmmm, this ain’t too bad”. The grip angle still bothered me somewhat but, due to the shortened grip on the baby it did not cause me the discomfort I have experienced in the full size models. The grip was still too wide and I did not like the fact that the baby’s grip left my little finger dangling off the bottom of the frame. I also expected much more recoil than the pistol actually delivered. After shooting I looked at the Glocks in the case at Impact Guns but they did not have any other than the full-sized and compact pistols.
A few days later I was looking at the Glocks in Cabelas when I happened upon the Model 36. This one looked different. It looked just about right and it is chambered for the .45 ACP cartridge, a time and combat tested round. Some quick research and I found out the following information: the Model 36 is called one of Glock’s Slimline pistols. They made the 36 a single stack pistol and shaved the width from 1.3 inches down to 1.13 inches. Doesn’t look like much in black and white but you can feel the difference. The magazine only holds 6 rounds which gives the pistol a full capacity of seven with one in the chamber. In order to get six rounds in they had to extend the magazine slightly below the grip. The base plate of the magazine has been built up and accordingly and this is fantastic as it allows me to get all of my fingers around the grip.
The pistol is 4.76 inches high just over 6.77 inches long with a 3.78 inch barrel. It has normal Glock sights consisting of a white dot post up front with a fixed rear sight with the opening outlined in white.
After looking at the model 36 at Cabelas I spent the week contemplating if I should go over to the “dark side”. On my next Saturday visit to the range, Impact had one and it was $70 less than the one at Cabelas. Obviously it was meant to be.
I shot the pistol on two occasions with modest success and then had the Gunsmith add two accessories which made the pistol eminently more shootable. The first was to replace the standard magazine base plate with a Pearce base plate extender which gives you just a little more to hang onto and actually looks like a natural extension of the grip frame. The second accessory was to replace the standard sights with a set of fiber optic ones from Tru-Glo. Now the front sight glows a nice blaze red and rests in between two green glowing dots on the rear sight. The Tru-Glo sights really tightened up my groups.
A few people at the range tried the pistol before these two accessories and their groups were not real good, in fact, there were some complete misses of the paper. There is a great lesson to realize here; any small handgun (revolver or pistol) is not for the novice shooter. Being able to shoot a small handgun well, regardless of caliber, takes a good deal of practice. If you are going to purchase a cute little handgun for self defense purposes, be prepared to invest a good deal of money at the range for practice time and ammunition.
Shots Fired 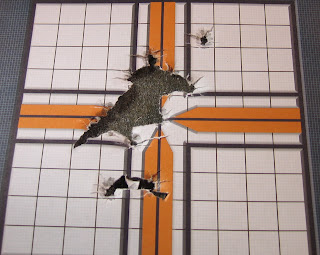 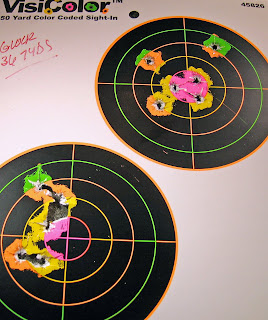 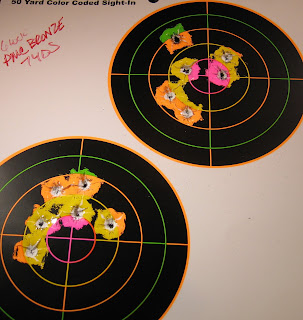 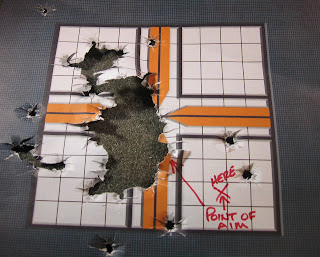 (50 rounds of Magtech 230 grain FMJ fired at 30 feet. The red X marks my point of aim for the large gaping group in the left half of the target. I supplied this target to the Gunsmith to assist in fitting the Tru Glo replacemet sights.) 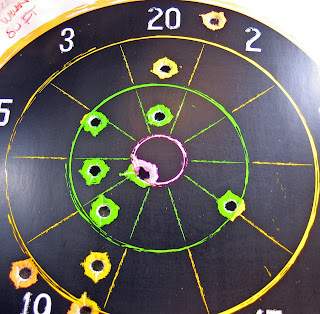 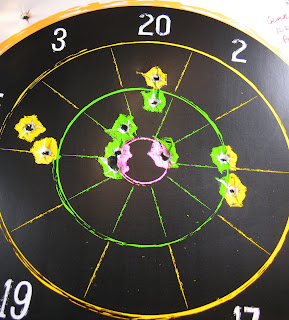 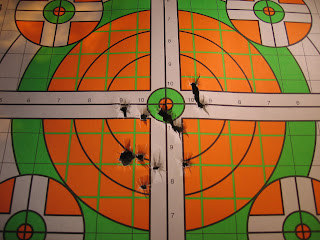 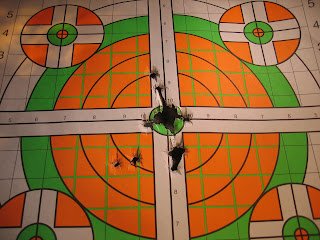 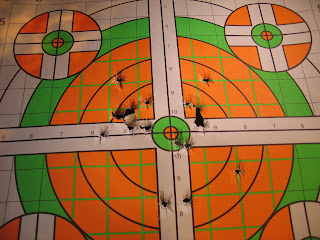 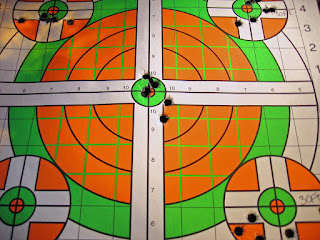 (Center and upper left: 6 rounds of Remington Golden Sabre 230 grain JHP fired at each bullseye from 7 yards. Upper and lower right: 6 rounds of the same ammunition fired at 30 feet.)
Final word.
With practice this pistol is capable very good accuracy at reasonable distances (anything over 45 feet may be a stretch) and obviously the .45 ACP caliber is a battle proven defensive round. It is not really a pocket pistol but would ride easily in a well designed and constructed holster.
Posted by Average Joe's Handgun Reviews at 11:20 PM