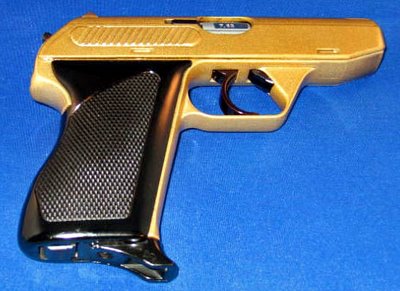 This pistol is an odd duck; there is no middle ground here, you either think it is beautiful or ugly. Me, I am strongly leaning toward ugly. It is also finicky. When it liked a particular brand of ammo it shot it very well. When it didn’t like the brand of ammo it gave me feeding fits akin to force-feeding strained spinach into my daughter’s mouth when she was a baby.

First, let’s look at where this pistol came from. H & K grew out of the ashes of the Mauser firearms company in post WWII. The Mauser factory was occupied for about a year by the French military and shut down in 1946. In 1949 Edmund Heckler and Theodor Koch, who were former Mauser engineers, gained permission to go back to the factory to produce machine tools. Eventually they began producing military rifles for the West German armed forces as well as other countries around the globe.

The H & K model 4 was their first commercially produced pistol and was manufactured from 1964 to 1983. The pistol has is roots in the Mauser Hsc. It bears a slight resemblance and disassembles in exactly the same manner. The major difference is that it is smaller and lighter (about 17 ounces) due to its lightweight aluminum frame. The model 4 was available in .22LR, .25 ACP, .32 ACP, and .380 ACP. In fact they produced a pistol pack that contained barrels and magazine in all four calibers.

Around 38,000 of these pistols were produced with 12,000 going to the West German police and other government agencies. Here are the specifics on this pistol:

This specimen has black plastic grips wrap-around grips with a thumb rest on the left panel. The sights are small but provide a pretty good sight picture. The magazine release is mounted on the heal of the grip in the typical European fashion. Overall I like this pistol, it feel great in the hand, is accurate and easy to shoot. I also like the way it disassembles:
1. Remove the magazine.
2. Press down on the slide release latch inside the front of the trigger guard.
3. Pull the slide forward and up off of the frame.
4. Remove the barrel from the slide.

As outlined above the pistol breaks down into four components, the magazine, the frame, the slide and the barrel. The recoil spring is permanently attached to the barrel. I like the minimal simplicity of this design. Once taken apart for cleaning there are only four pieces laying on the work bench; there are no slide release pins and levers, no screws, and no barrel bushings, etc. lying about. You do not need a bushing wrench, screwdriver, mallet, guide rod pin or guide rod clamp to disassemble the H & K Model 4.

The downside to this pistol is that it is extremely ammunition sensitive. It would only feed three rounds; Wolf Gold 71 grain FMJ, Magtech 71 grain FMJ, and CCI Blazer. It would not feed hollowpoint ammunition at all. This may not be much of a disadvantage as some gun scribes declare that in a .32 you are better off getting the extra penetration of an FMJ bullet as opposed to the unreliable expansion and lesser penetration of hollowpoint ammo. However, not only would the model 4 not shoot hollowpoints, it also would not feed some brands of FMJ ammo such as Remington and Federal Classic. 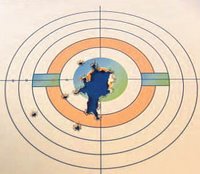 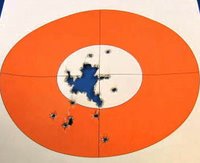 (TARGET SHOT AT 21 FEET WITH 45 ROUNDS OF SELLIER & BELLOIT 73 GRAIN FMJ AMMUNITION. THIS ROUND WOULD NOT FEED RELIABLY WHICH IS A SHAME AS IT POSTS A VELOCITY OF 1043 FEET PER SECOND, THE FASTEST OF ALL OF THE READILY AVAILABLE .32ACP AMMUNITION) 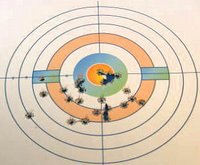 (TARGET SHOT AT 21 FEET WITH 24 ROUNDS OF CCI BLAZER 71 GRAIN FMJ AMMUNITION. WHILE THIS ROUND FED RELIABLY AND GROUPED WELL IT DID SHOOT RATHER LOW) 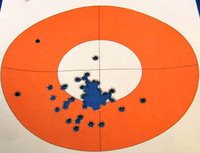 (TARGET SHOT AT 21 FEET WITH A MIX OF FEDERAL PREMIUM, FEDERAL PERSONAL DEFENCE, AND WINCHESTER SILVER TIP AMMUNITION. ALL OF THESE ARE HOLLOW POINT CARTRIDGES WHICH WOULD NOT FEED RELIABLY. AGAIN THIS IS A SHAME AS THE SILVER TIP AMMO POSTED THE BEST GROUPING IN THE BOTTOM LEFT QUADRANT OF THE WHITE CIRCLE.)
That only leaves the 800 pound gorilla up for discussion; the finish on this pistol. I can find no mention of a greenish-gold finish on the internet or in any of my reference books. The finish appears to be very durable and as all markings on the pistol are sharp it does not appear to have been refinished. I would love to know more about this pistol.

While I like the simplicity, ergonomics, and accuracy (with some ammunition) I doubt if I would ever carry it for self defense purposes. It comes down to two issues:
1. The fact that it is so ammunition sensitive would not allow me to feel comfortable with it.
2. The second reason is its finish. The presentation of this pistol might not act as a deterrent on a thug intent on a robbery or other crime. The criminal might take one look at this small golden gun and assume that it is a toy gun which might force me into actually having to shoot it to prove otherwise. When called upon to thwart an assault you want your pistol to look intimidating. You want presentation of your weapon to cause the assailant to reassess his intent and surmise that deadly force is on your side.

After last week’s posting several people corresponded that they wanted to know if the problems with reliability were indeed resolved after a 200 round shoot-in. I am happy to report that they were. The EMP reliably fed both Wolf Gold 147 grain hollowpoint ammo and Remington Golden Saber 147 grain JHPs. The best accuracy in a hollowpoint still seems to be the Speer Gold Dot 115 grain JHP. 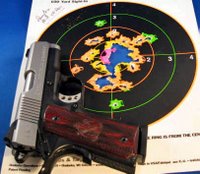 This pistol is a hoot to shoot!
Posted by Average Joe's Handgun Reviews at 10:09 PM