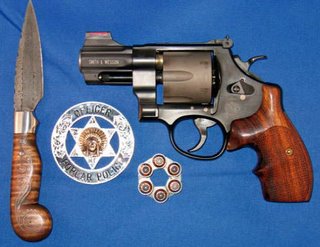 The Smith & Wesson 325PD (Personal Defense) revolver in today's range report comes with a 2 3/4 inch barrel, adjustable rear sight, and hi-vis front sight. This is one of S&W's scandium revolvers and it is a lightweight tipping the scales at 21.5 ounces. The 325's heritage goes back to the 5 inch barreled Smith & Wesson Model 1917 which was a .45 ACP revolver Smith & Wesson produced in World War I when Colt was unable to manufacture enough of their new model 1911 .45 semi-auto pistols. As you can imagine, in a time of trench warfare, a fast firing and accurate .45 caliber handgun was a pretty useful tool. The Model 325 PD is produced on S&W's N frame just as the Model 1917 was. When the government came to Smith & Wesson in 1917 they wanted a handgun that fired the .45 ACP for a couple of good reasons; first they had a large capacity of this ammunition and wanted to keep the ammo maunfacturers focused on producing one handgun round, and second, they only wanted to keep one handgun round in inventory which would simplify the shipment process for the supply and quartermaster units. The Military was very smart, knowing if would be very difficult to keep an inventory of two different handgun ammunition on hand and supply the troops with the ammunition each group needed. There was however, one problem with their request. The .45 ACP, being a semi-automatic round, had a rimless case and the revolvers required a rimmed cartridge in order for the extractor to be able to remove the fired shell casings from the cylinder. This problem was solved by the development of the half-moon and full moon clips which were nothing more than a piece of circular (or semi-circular) stamped sheet metal with bushings cut into them that held 3 (half-moon) or 6 (full moon) cartridges in place. After firing, the shooter pushed the extractor rod and the extractor pushed against the moon clip expelling the fired casings. As a bonus, the moon clips also made the revolver easy to reload.

In WWII these handguns were again pressed into service along with other S&W revolvers such as the Victory Model .38 Special. A large amount of them went to England as a part of the Lend-Lease program. Quite a few of the Victor Model revolvers were issued to Navy pilots. In the mid 1980's supplies of these revolvers were found overseas and began to come back into the US on the used/surplus military market. I remember seeing quite a few at Sherwood International and the Pony Express gun shops in the San Fernando Valley at that time. The quality of the Victory Models were somewhat suspect as their production had been rushed and had a reputation not being all that accurate. Still many could be found in very good condition and were picked up be collectors looking to round out their presentation of WWII arms. The Model 1917's however were shooters. The condition on those coming in at the time ranged from fairly poor to very good, but they were tough guns and their reputation for accuracy was very good. Because many were in an outward condition that did not attract the military afficianados, the shooter had a bargain and found a platform that could be customized without the guilt of ruining a collector's item. I saw several at the Pony Express Gun Shop that had been refinished, had the 5" barrel cut down to 2 3/4 inches, squared off the front sight and added a gold bead. I even remember one that had those refinements along with a jeweled trigger and hammer. Alas, although I wanted one, these customized handguns went for the princely sum of $425.00 which was way too rich for me at the time. It is evident that the 2 3/4 inch Model 325PF hails from those shortened and customized Model 1917s.

I have written about this particular revolver before and, after firing it, found that the supplied Ahrens grips, while certainly functional, were not up to my liking in terms of appearance. They chunky and just plain dull. That led me to order a set of Eagle checkered and finger-grooved Secret-Service style boot grips. 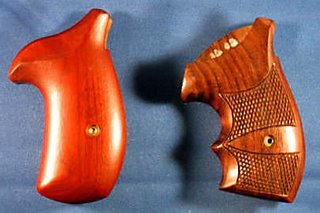 I took the revolver to the range, fired 12 rounds through it and had to put it down. The Eagle grips, while extremely attractive, are very narrow. This caused the recoil to be more focused and really hurt the web of my shooting hand. I then placed another order, this time from Hogue, for their checkered Bantam grip. This grip (as seen in the pictures of the revolver in this report) are very handsome, have palm swells, are more rounded and make the recoil very acceptable. The Bantam grip also has a finger groove but the shoulder of the first groove is very high which allows your middle finger to get a better grip of the handgun.

Shooting the Model 325 PD
As you can guess, there is some significant recoil coming from this light-weight revolver. However, with the right grips, the recoil is managable. 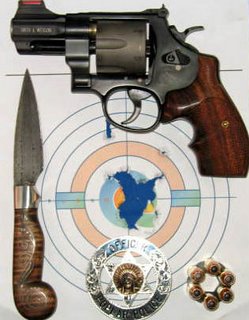 The target at the left was hit with 24 rounds of .230 grain ammunition at 21 feet. This is great accuracy from such a light weight power-house. Ammunition was Fiocchi and Winchester white-box and I had no problem with the bullets coming unseated from improperly crimped casings that occurred the first time I wrote about this revolver. The morale remains the same: always use quality ammunition.
Posted by Average Joe's Handgun Reviews at 11:23 PM