Remington 51
The first pistol is a fantastic little Remington Model 51 in caliber .380 ACP.

The Model 51 was manufactured by Remington from 1918 to 1927 with approximately 65,000 produced in either .32 or .380 ACP. This specimine is in about 85% condition with some fair loss of bluing on the backstrap. The main competition for this pistol was the Colt Model 1903 in .32 ACP and the Model 1908 in caliber .380 ACP. Like the Colt .380 this one also holds seven rounds in the magazine with one in the chamber. The Colts were vastly more popular and produced from the date of their model number through WWII. However, my Remington 51 is much more accurate than my Colt 1908. This may be because the Remington's grip and grip angle makes it a very intuitive pointing pistol. Gun lore states that Remington put a lot of research and development into the design of this grip and if that is true then they should be proud of the results. Why the pistol did not find the success of its Colt competitor is a mystery to me. The handgun is thin and very flat with no protrusions on any side. This pistol could be stuck in the waistband of your trousers and ride there very easily all day. In fact legend has it that General George S. Patton, Jr. frequently carried one just that way. I say legend because it is known that he carried a Colt Single Action Army Revolver in .45 Colt with ivory grips, a Smith & Wesson "N" frame .357 magnum with a 3 inch barrel and ivory grips, and a semi-automatic small caliber pistol. While it could have been a Remington 51 it was more likely a Colt Model 1903 or 1908 since they were actually issued to General Officers of the Army. There is some information to suggest that a close friend had one engraved and sent to him when he was overseas during WWII. While this may be true one has to realize that:
1. By 1941 this pistol had been out of production for 14 years.
2. It is unlikely that Patton would carry an engraved presentation piece with him during the rigors of combat and overseas duty.
3. Pictures and other documentation about his Colt Single Action Army .45, Smith & Wesson .357, and Colt Model Model 1903/1908 are quite plentiful on the internet and in reference books.

There is a lot to like about this Remington pistol but there are also a few negatives as well. Like most small pistols of the day sights were apparently thought not to be all that important since, just like the Colt models, the sights are miniscule at best. The other negative is the disassembly of this handgun. It is tough to take apart and even tougher to put back together. Last night I have given up, put all the parts in a plastic baggie and intended to take them to the gunsmith on Monday. However, I gave it one more try this morning and was successful. This alone may be the reason these pistols never caught on with the consumer.

Even though the sights are minimal the intuitive ability of this pistol to point makes it a good shooter as these targets attest. Overall this pistol was a lot of fun to shoot. 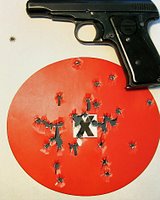 This target was placed at 50 feet and absorbed the last 37 rounds of the shooting session.

Now I know that many of you might be reading this and saying that this is all well but you wouldn't really carry a .380 for self defense. If so, remember this: Wild Bill Hicock came out on top in seven gunfights (one supposedly at 50 yards) with a Colt Cap and Ball blackpowder revolver in .36 caliber. He put seven men in Boot Hill pushin' up daisies by shooing them with a round lead ball slightly smaller than a .380 bullet and without the ballistic enhancement of hollowpoints and higher pressure powders that we have today. Wild Bill understood the importance of accuracy. Therefore I wouldn't feel under armed carrying the Remington (and a spare magazine or two).

The Colt Officers Match came out of an evolution of the Colt New Service and New Army Revolvers and were most popularly chambered in .22 long rifle and .38 Special with a six inch barrel.

This specimen is in about 65 to 70% condition, has the rarer heavy barrel and the action still locks up pretty tight. Holster wear has worn most of the bluing off of the front of the barrel and handling has removed the blue from the back and front stap. The front strap also shows evidence that the original owner wore a ring on his third finger. The grips and the rest of the gun show nicks and dings appropriate with the age of a gun that was purposefully used almost 100 years ago. However, the revolver has character. Althoug the condition is not great, you can see that in it's time, this was a "best in class" firearm. Both the metal on the backstrap and trigger are checkered and the screw on the front sight still shows the "Fire Blue" color that made these revolvers so beautiful. The rear sight is adjustable for windage and the top of the frame is flat, rather than rounded as usually seen on fixed sighted Colt revolvers. The front sight is adjustable for elevation, although I am going to have to have the gunsmith show me how this is done. The barrel is marked .38 Special DA (double action) and although the single action pull is great I found better accuracy when pulling the trigger double action. The gun shot high in single action and double action lowered it near center as can be seen below:


I only had one box of .38 Special with me on Saturday and expect to work this in and get better groups next weekend.
Posted by Average Joe's Handgun Reviews at 6:22 PM