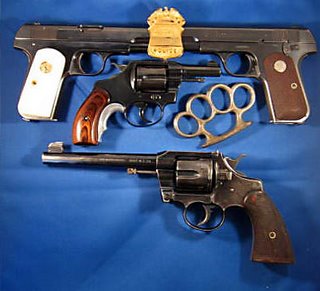 The Colt Model M pocket pistos were manufactured from 1903 (in caliber .32 ACP ) and 1908 (in caliber .380 ACP) until 1947. Production continued through World War II with the US Army issuing both the .32 and .380 pistols to General officers. Eisenhower, Patton, and Omar Bradley were all issued a Colt Model M pistols with Patton receiving one in each caliber. At the end of their service the officers were allowed to purchase their pistol, belt and holster. This practice continued through the Vietnam War. These pistols were extremely popular with almost one million produced, about three-quarters being calibered in .32 ACP.

They were also used in many Hollywood movies of the 1930's and 40's. In fact Hollywood liked to use both the .32 semi-automatic pistol and .32 caliber revolvers for several reasons: 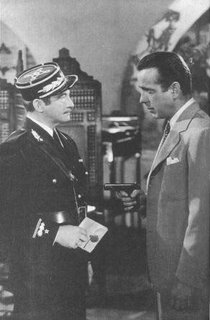 So the next time you are watching a gangster film with Bogart, Cagney, Muni, Garfield, or Robinson take a close look at the heat they are packin'. It might be a .32.

But don't limit your scrutiny to vintage cinema, in 1997's L.A. Confidential corrupt police captain Dudley Smith produced a Colt Model 1903 .32 ACP from the pocket of his bathrobe and used it to dispatch Detective Sgt. "Hollywood" Jack Vincennes.

Captain Dudley Smith fires a .32 ACP from his Colt Model 1903 Pocket Pistol at point blank range into the heart of Sgt. Jack Vincennes.

This scene was preceeded by one of my favorite movie lines. Sgt. Vincennes comes to Captain Smith's house in the middle of the night to discuss the possibility of police corruption whereupon Captain Smith says "Don't start tryin' to do the right thing now Jack, you haven't had the practice".

The serial number of this pistol puts it's date of manufacture as 1912. This pistol is just 6 years shy of it's 100th birthday and the only thing that has been replaced have been the grips. The barrel, springs, magazine and finish are all original. 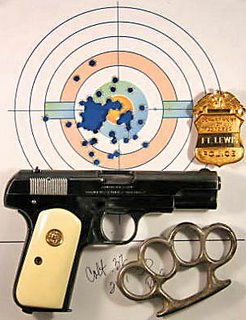 The finish is probably 90% and still maintains some of the famous bright blue luster that Colt used to be able to put on their firearms.

This pistol is easy to shoot. The recoil is almost non-existant and the old girl still has plenty of accuracy left in her. Due to the popularity of these pistols spare parts (both old and newly manufactured) are available. It is not difficult to find original and aftermarket grips, and newly made springs, magazines and barrels. The one complaint I have with these pistols (and most pistols of this era) is their sights. These pistols were not intended as target guns or for anything other than close quarters shooting, but better sights would be great for these old eyes. With all of that being said, she shot pretty good at 21 feet. Originally this pistol would not feed hollowpoint ammunition. After my last session I polished the feedramp with 000 steel wool. On this trip to the range both Winchester Silvertip and Federal Hydra-Shok ammo fed with no malfunctions. 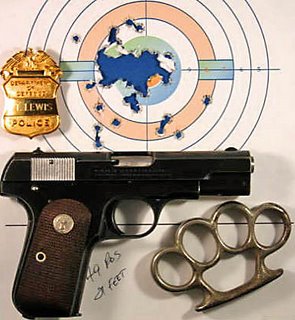 The serial number of this pistol puts its date of manufacture as 1935. Again, this pistol is in all original condition, including original grips. The finish is also about 90% but is almost black in color. The .380 ACP cartridge had a more robust recoil than the .32 and caused the checkered thumb safety to eat into my right thumb. This is probably partially due to the well-worn walnut grips. The checkering on the grips is still visible, but they are fairly worn down with age bringing the thumb in closer proximity to the safety lever. A new pair of aftermarket grips would undoubtedly solve this issue. Again, practical accuracy within intended ranges is certainly pretty good.

I would love to find a "junker" Colt .380 ACP (that has no collector value) and have it refinished and updated with better sights. These are fantastic handguns produced by a premier factory at the height of their art. All parts of these pistols were hand fitted and the amount of time and craftmanship that went into the production of these pistols would render them impossible to produce in today's world. 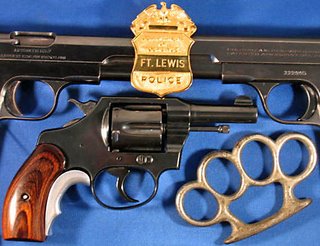 The Colt Pocket Positive was produced in .32 Colt Police (interchangable with the .32 S&W Long cartridge) with a 98 grain round-nose bullet. The Smith & Wesson cartridge pushed the bullet a little faster than the Colt round so the S&W cartridge survived and the Colt round is relegated to curio status.

I have written about this pistol before and was not really impressed at the accuracy. Since then I completely scrubbed the barrel, bringing back the prominence of the rifling, and added a Tyler T-Grip adapter to the aftermarket grips that were already on the piece. Firing yesterday I was still not happy with the accuracy until I tried backing some of my trigger finger off the trigger. It is a little difficult to see, but this is a very small revolver and it is too easy to get too much finger on the trigger and...Bingo that's all she needed! 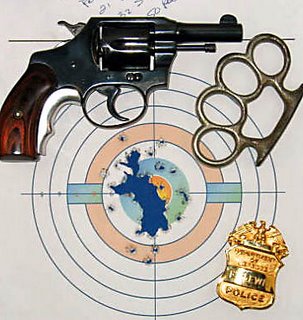 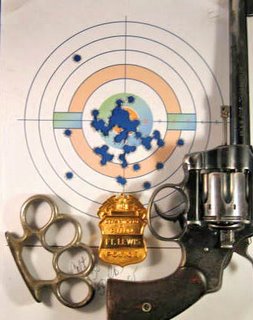 I have written about this old shooter before. I don't have much to say except that I am very happy with the way she performs. Here's fifty rounds fired at 30 feet.

In this range report we looked at four Colt handguns all produced well before WWII. So what's the morale? These old timers are still useful and the next time you see one in your dealer's show case or at a gun show, give 'em a look...or don't and it will still be there when I come in.