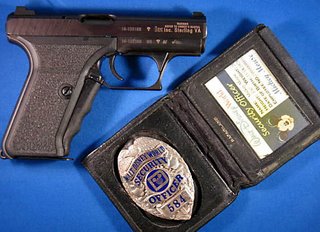 The Heckler and Koch P7 was designed by H&K to submit in the West German police trials of 1977. This is probably one of the most innovative post WWII pistol designs and regrettably was discontinued in 2005. (I was fortunate to get one of the last ones off out of their plant.) The West German police wanted a modern 9mm but also wanted it to be a safe pistol. The H&K P7 offerred a modern design with an unusual, but very effective, safety device and provided supurb accuracy as a part of the total package.

The inherent safety of this pistol was provided by the grip safety which also cocked the pistol. Now, grip safeties were not new; John Browing put them on his .45 pistol in 1911 and his .32 pistol back in 1903. However, what was different about this one is that it is on the front strap, instead of the backstrap where John Browning put them. The Browning-style backstraps have been criticized as some people have occasionally missed them as they griped the pistol to fire and, if the grip safety is not depressed, the gun just ain't gonna fire. With the H&K front strap grip safety you can't really miss the safety lever if you are gripping the pistol to shoot. What makes it even more safe is that it requires 8 pounds of pressure to depress the safety lever. Therefore the pistol is not capable of firing until the shooter applies at least 8 pounds of pressure to their grip. Once the 8 pounds of pressure is applied to depress the safety lever, it only takes one pound of pressure to hold the lever in the firing mode.

The accuracy on this pistol is first rate and is due to several factors:

I like this pistol a lot! It is easy to shoot and very accurate: 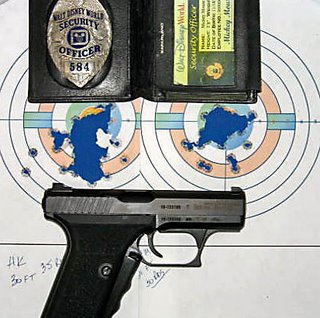 Originally, when these pistol were produced the magazine release was on the heal of the grip in the traditional European style. As the gun was produced in later versions for the American Market an ambidextrous magazine release was added right behind the trigger guard. This is a very ergonomically correct placement as I am able to work the safety with my right thumb on the left side of the pistol or with my trigger finger on the right side. The sights are of the 3-dot variety adjustable for windage although there was really no windage adjustment necessary for this pistol.

While I love this pistol, sales were poor and, as I mentioned earlier it was discontinued last year. So what happened? Well I can only guess but two things come to mind. First this was always an expensive pistol and second, the magazine capacity is only 8 rounds. While this is a fairly compact pistol, Smith & Wesson, Beretta, Glock, and others were producing good 9mm pistols with much higher capacities for much less money. The pistol was an innovative design and was produced with a lot of hand-fitting of the parts which kept the costs up. In fact, one of the reasons H&K gave for discontinuing the pistol was that all of the people who has been making it for the past 28 years were retiring. I am glad to have this one. Their price on the secondary market will only increase. 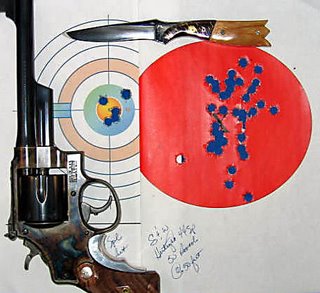 This is another revolver that I have recently written about and I just want to update that it continues to shoot well. The target on the left contains 6 rounds fired at 30 feet. I know it looks like there are only five rounds on the target, but the grouping at the bottom right of the 10 ring actually took four slugs. The target on the right is 50 rounds at 50 feet. Also pictured is the "Rising Phoenix" knife by Gene Osborn. The knife is made of hollow-ground ATS-34 steel with a fully fileworked spine, bronze Damascus bolsters and sculpted Mammoth ivory handles.