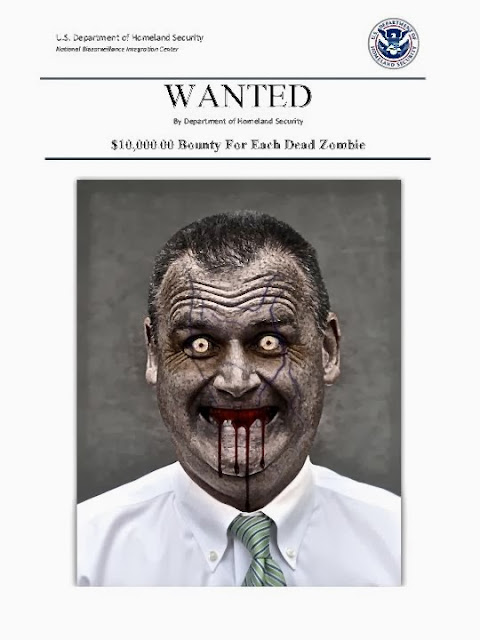 Everyone knows that the Fall season brings out the Zombies, especially during the all important November Nielsen Sweeps Weeks.  That being said it's time to review some tools that will help keep the walking dead off your door step.

Specifically we will be reviewing the Smith & Wesson Performance Center 629 V-Comp in .44 Magnum and the Mossberg  464 SPX Lever Action 30-30.  So settle in because these are two fun firearms. 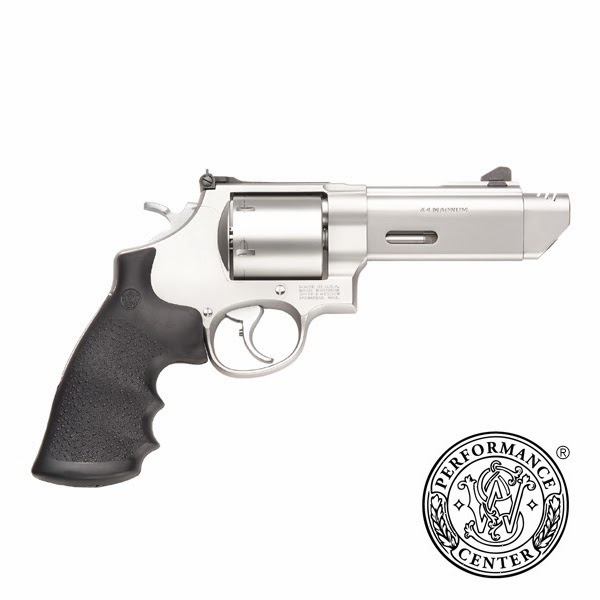 Let's start with the 629's specifications:


Upon first firing the revolver I felt that the Hogue grips that accompanied the 629 were too thin.  I wasn't getting a good grip on the revolver and the thin grips focused the recoil into the web of my hand.  I chucked them and ordered a set of Super Rosewood grips from Altamont. 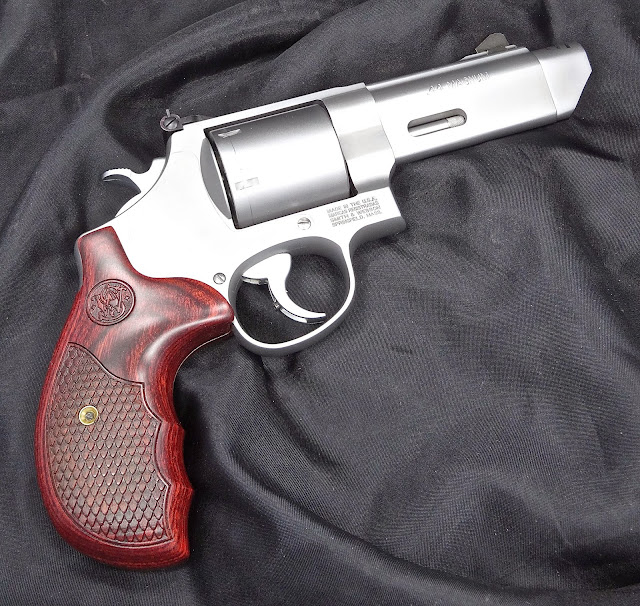 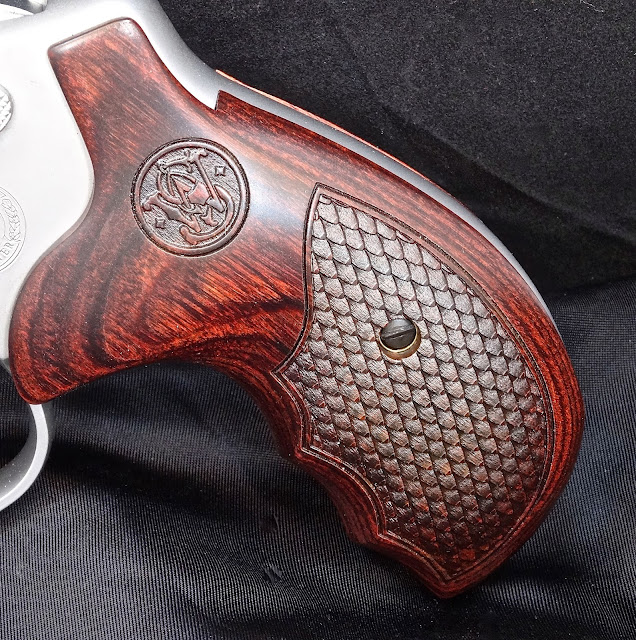 While these grips were absolutely beautiful they also allowed my hand to slip down the the back strap during firing so I turned to Ahrens for a set of their Cocobolo tactical grips. 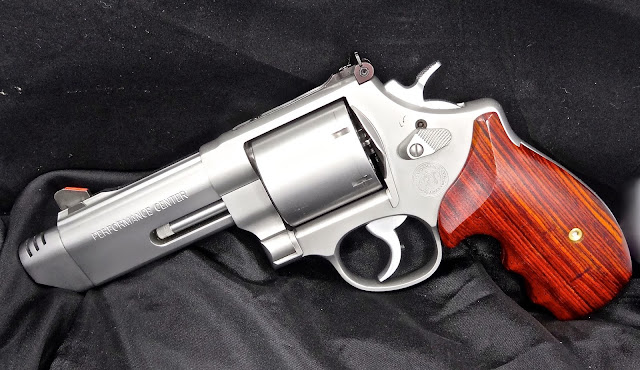 The Ahrens grips are still pretty good lookin'!  They are also wider so they disperse the recoil energy over a wider area.  The finger grooves also fit well and are deeper which helps hold your fingers in place.

Now one of the first things you'll notice about this handgun is the compensator at the muzzle of the 4 inch barrel. 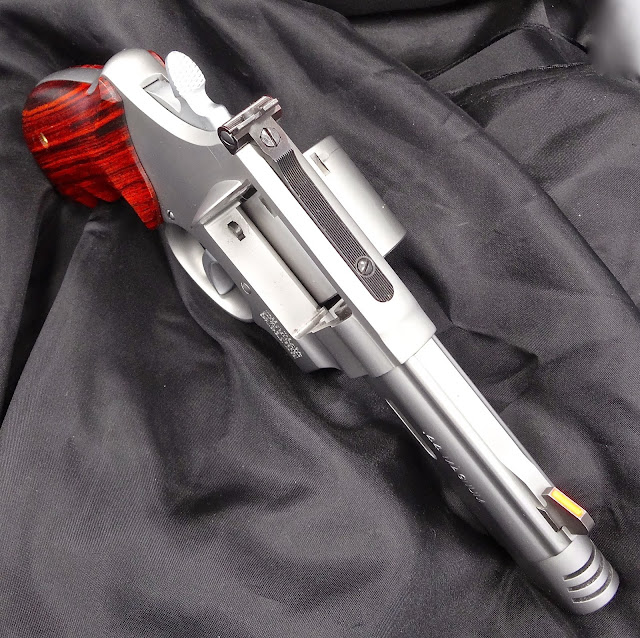 The compensator is removable...but why would you?  It's so damn cool.  At the rear of the top strap is Smith & Wesson's fully adjustable all black rear sight.  Up front is a drift adjustable blaze orange ramped front sight that is easy for my 58 year old eyes to see.  The hammer is in the classic "teardrop" shape and both the hammer and trigger are chromed with a trigger stop installed to prevent over travel.  The action has been tuned by the PC shop.  The Double Action pull is over 12 pounds which is the limit that my digital scale can measure.  It is extremely smooth and doesn't feel like many of the 12 + pound triggers I have handled in the past.  The single action has little take-up and a smooth 4.11 pound trigger pull.

OK, so it looks real cool...but how does it shoot.

I started off with a little warm-up with some Black Hills .44 Special Cowboy loads at 15 feet and the light cowboy loads in the big 629 are very pleasant to shoot. 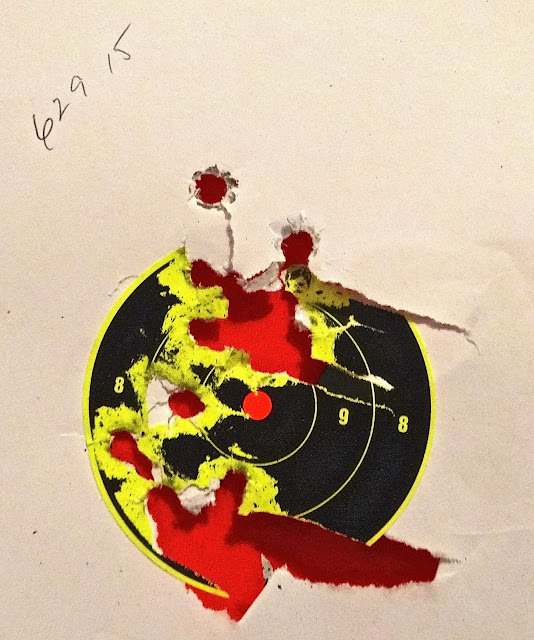 I then moved back to see what she could do at 21 feet. 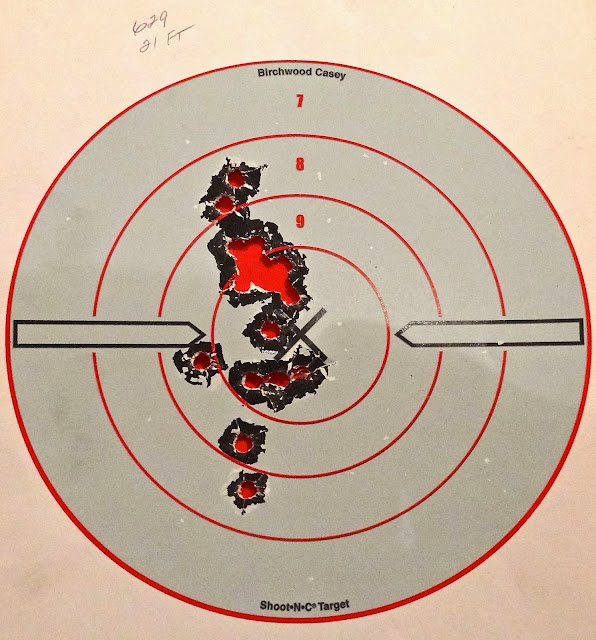 Quite frankly, I was a little disappointed with the spread of this group and began to wonder if I had made mistake in picking up this revolver. 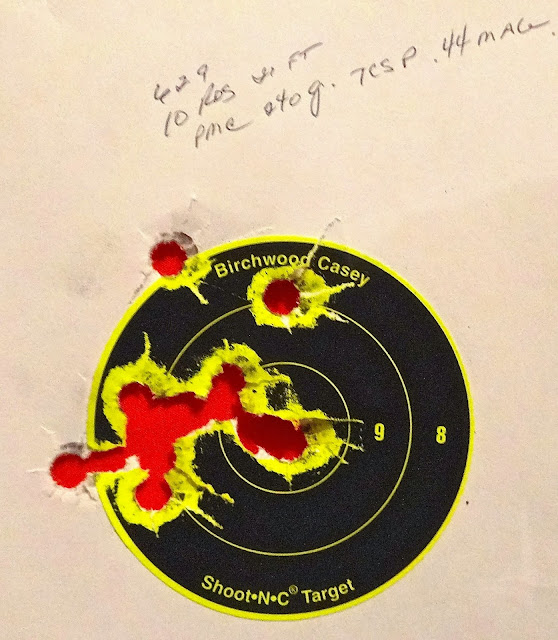 That's more like it!  But I do have to admit that after firing the first two rounds I retreated to my range bag to grab a shooting glove.

Bring on the Zombies

Nothing could be scarier than a gaggle of Zombified Nazis.  I let them get to 31 feet before I opened fire. 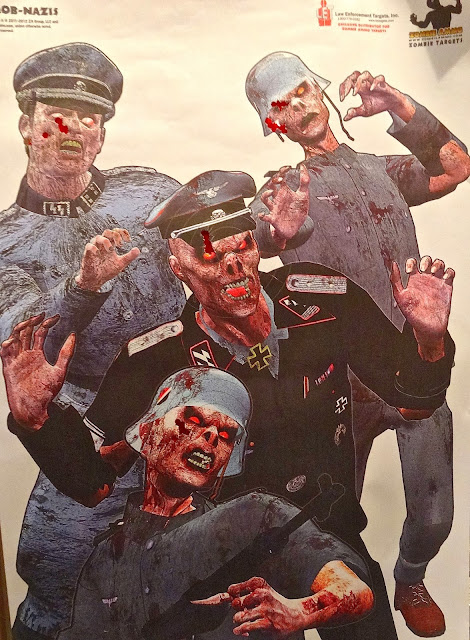 Fortunately the 629 V-Comp delivers some magic magnum medicine to put the Zombies out of there misery. 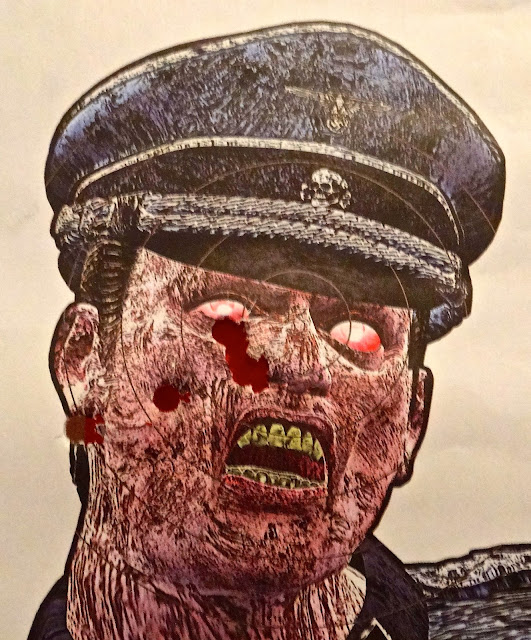 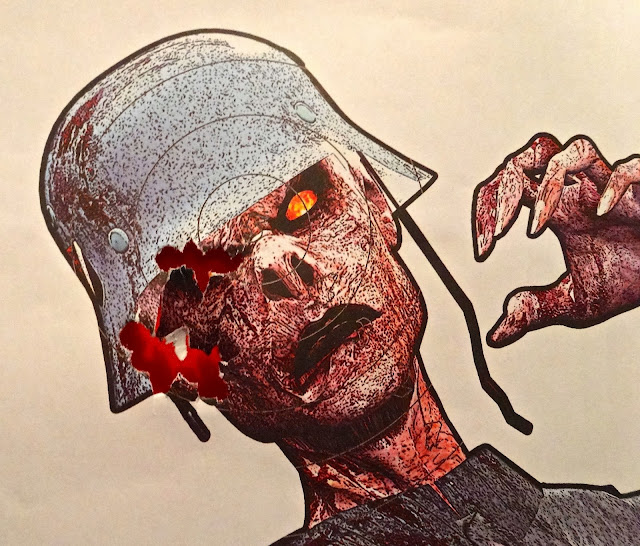 Sgt. Schultz lost both his right ear and eye. 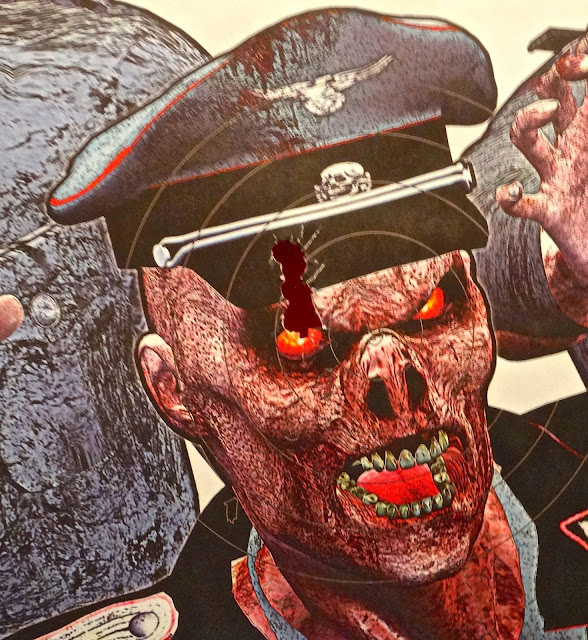 The 629 zero'd in on Major Hochstetter of the Gestapo.  2 shots were fired at each target followed by another 2 rounds.  All four grouped together on the good Major. 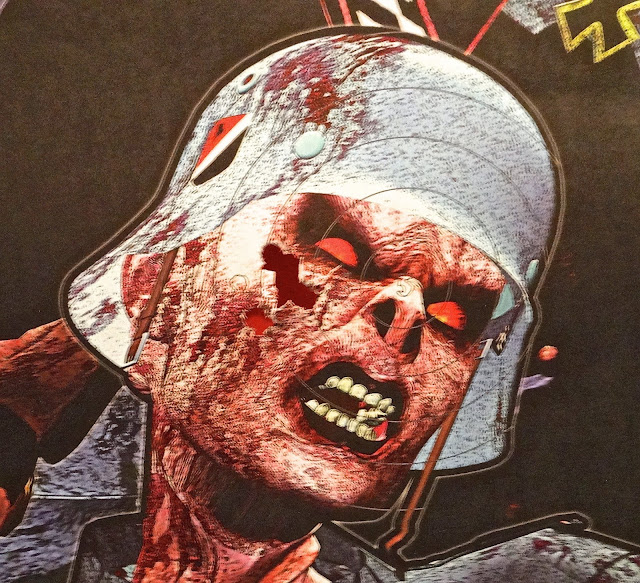 For longer range Zombie busting I employed the lever action Mossberg 464 which hold six rounds of popular and versatile 30-30 Winchester.

Now, I have to own up to the fact that I have made fun of this carbine on more than one episode of "The Gun Nation" podcast but when I got to handle one I was sold, especially with the value price point of $459.00.

The fully extended overall length of the carbine is 34 inches but the tactical stock allows you to adjust the length of pull from 10.75 inches to 14.63 inches.  As bizarre as this stock looks I like the ability to make the overall length shorter as I prefer the stock in the third position.

I find it to be more comfortable and the shorter length of pull allows me more leverage when cranking the lever down and back up.

The forearm of carbine is a synthetic material containing three picatinny rails for hanging flashlights, lasers, railroad lanterns, paint cans or whatever else feeds into your taticool fantasy.  The rails are removable if you want a more traditional feel to your carbine but the 464 also comes with ladder rail covers which gives you a wider surface to grip.

While I don't care for the way they look, I do like the larger gripping surface.

The sights are really good. 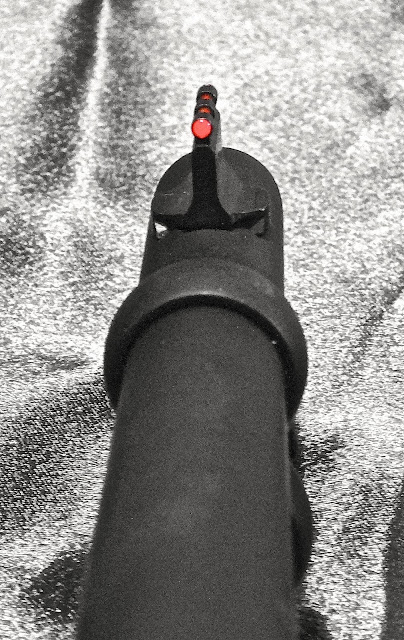 The front sight is a red fiber optic pipe that is very easy to pick up on indoor ranges with spotty interior lighting.  Outdoors, if there is any sunlight at all, the sight glows like the red dot in a good optical sight.  The rear sight contains a u-shaped green optic pipe and provides good contrast with the front sight. 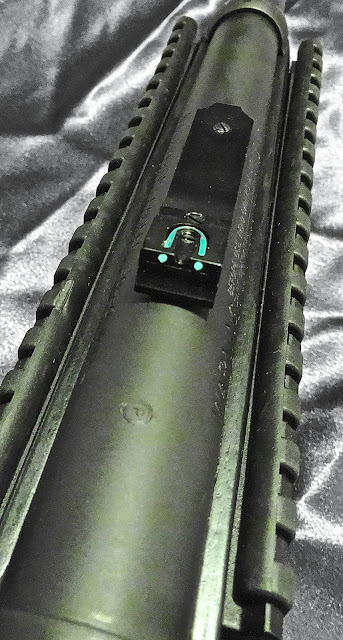 The sights are easy to pick-up, fast to get on target, and provide the necessary levels of accuracy.

I was surprised at how smooth the various mechanical functions are on this piece.  Inserting rounds in through the loading gate is much easier than the three lever action rifles I have owned in the past which consisted of one Rossi Puma and two Winchesters.  The lever action is smooth with nary a hitch in the movement and the trigger pull had no take-up and a crisp release.

But how does she shoot?  Well as luck would have it a group Zombified Lady Gaga Concert goers stumbled onto the 25 yards line of the range. 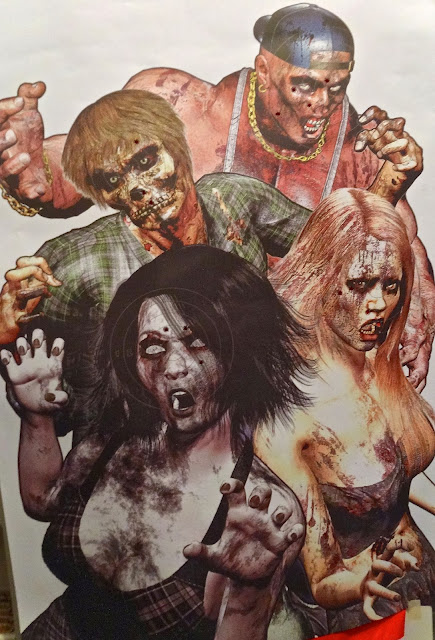 The Skipper took four 30-30 pills to the head although the one between the eyes probably ended his rampage. 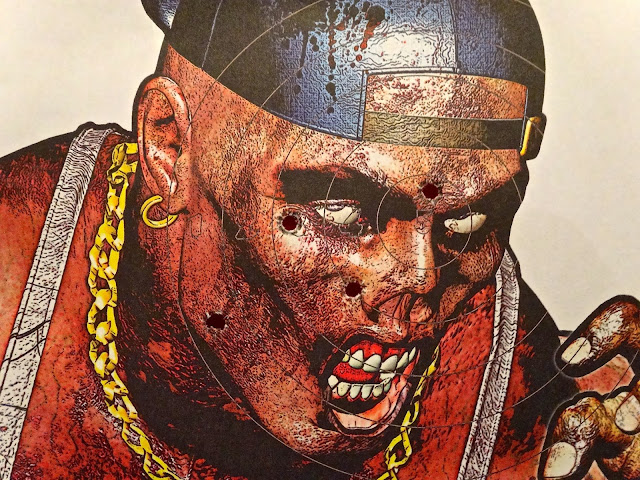 Gilligan took three rounds into his vacuous melon above his left eye, right up his nasal cavity, and right through his front tooth. 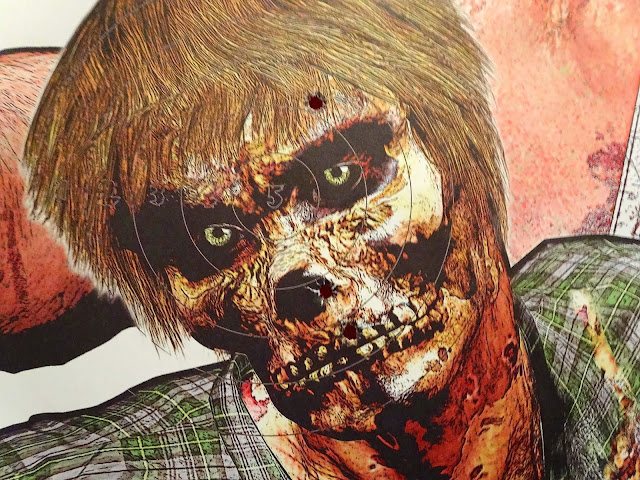 Mary-Ann's face is frozen in awe as she was terminated with two shots to the forehead and right below her left eye. 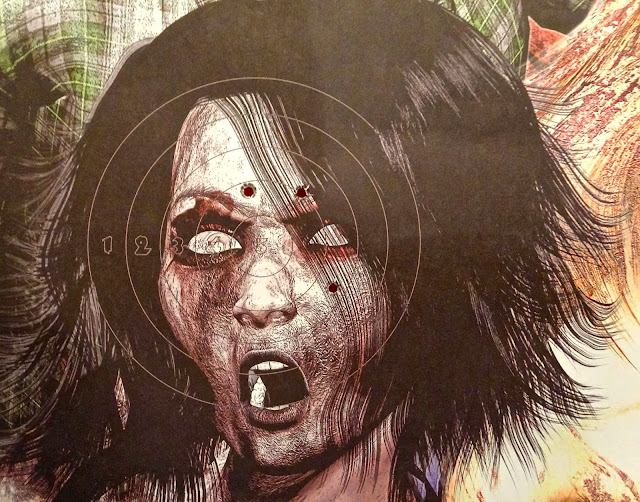 And Ginger did not fare much better taking one round to the right cheek, one below her right eye, one just below her nose and one right in her zombie-screaming mouth. 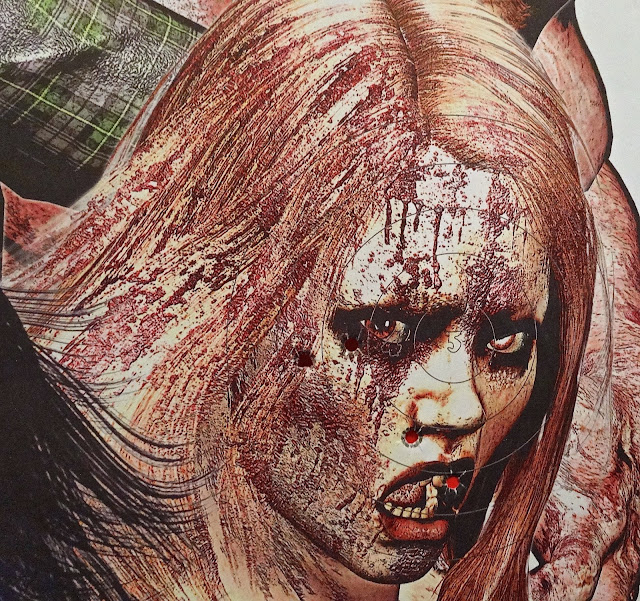 So there you have it.  Two potent Zombie thumpers from opposite ends of the price spectrum.  The Mossberg 464 SPX can be found South of the $500 mark while the S&W PC 629 V-Comp will be a little North of the $1,000 line.  They are both loads of fun to shoot!
Posted by Average Joe's Handgun Reviews at 10:59 PM

Did you find the compensator on the 629 loose at the end of your shooting?