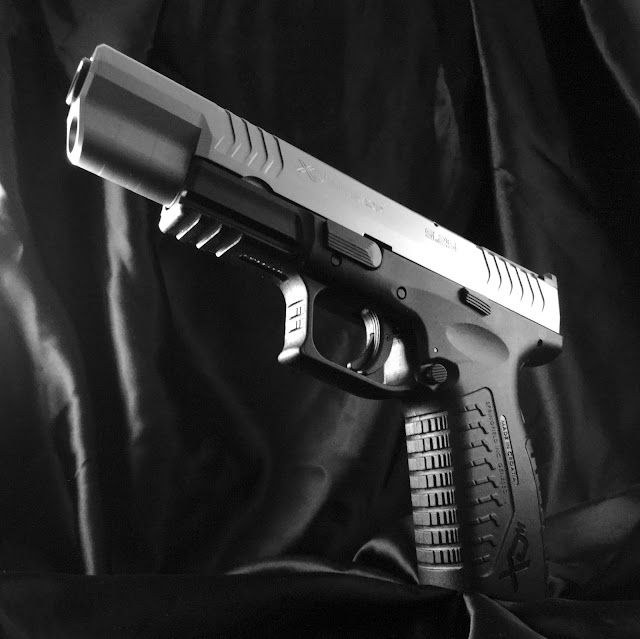 In this article we are going to examine the Springfield XDm series of pistols; specifically the pistol shown above which is the 5.25 inch competition model in .45 ACP.

The roots of the Springfield XD line-up goes back to 1991 and the Croatian HS2000 pistol manufactured in the city of Karlovac by Hrvatski Samokres Produkt.  This was a striker fired polymer framed pistol originally chambered in 9mm with a 4 inch barrel. The original HS2000 was imported in the United States for a short period of time and while it received some critical acclaim it did not garner much attention from the buying public.  That changed in 2002.  Springfield Armory was looking to diversify their portfolio of offerings and licensed the rights to sell the HS200 in the U.S. 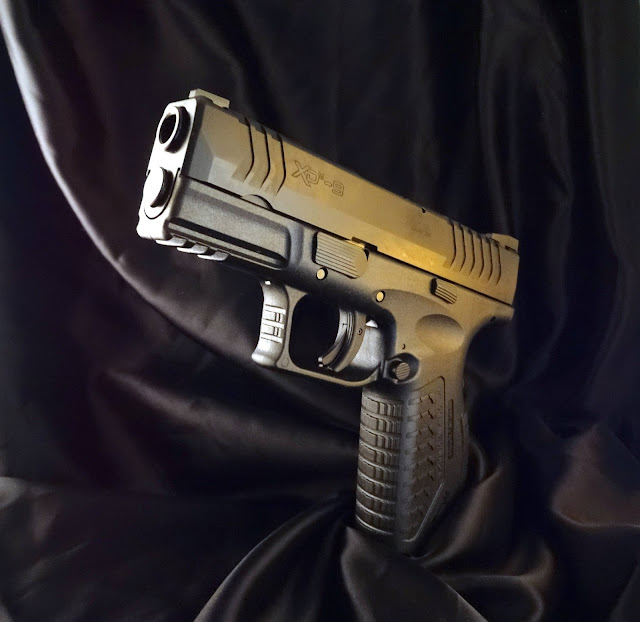 The original HS2000 had some feeding problems and Springfield's engineers and designers made some enhancements and re-christened the pistol as the XD for "extreme duty".  Gun reviewers and shooters found that the XD pistols lived up to the name that their acronym denotes as the pistol was reliable and tough as nails.   The XD soon developed a small but very devoted following. 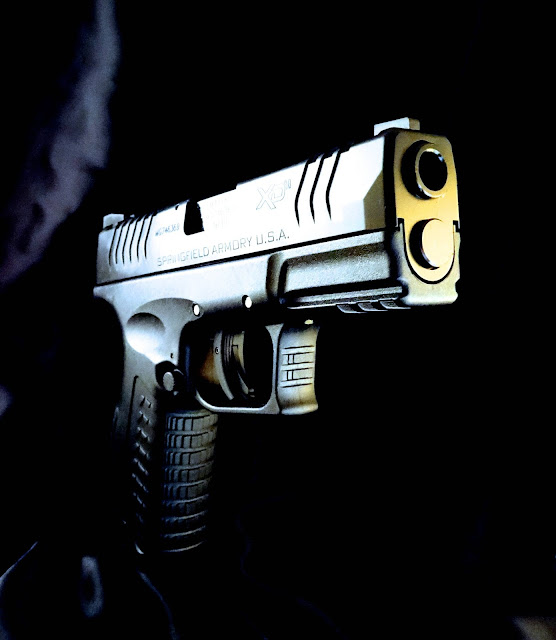 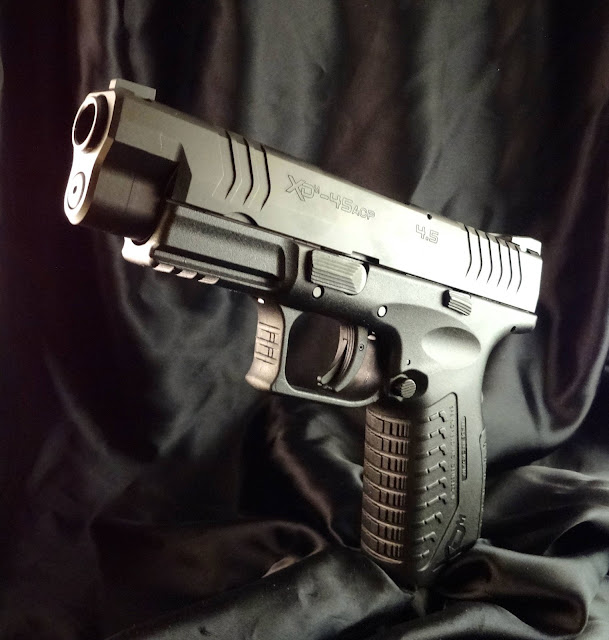 The new XDm kept the ambidextrous magazine release, the grip safety, the accessory rail and the hinged safety trigger from their XD design but they reworked the rest of the pistol.  Comparing the XD to the XDm is like comparing a cold war eastern bloc sedan to a European sports car. 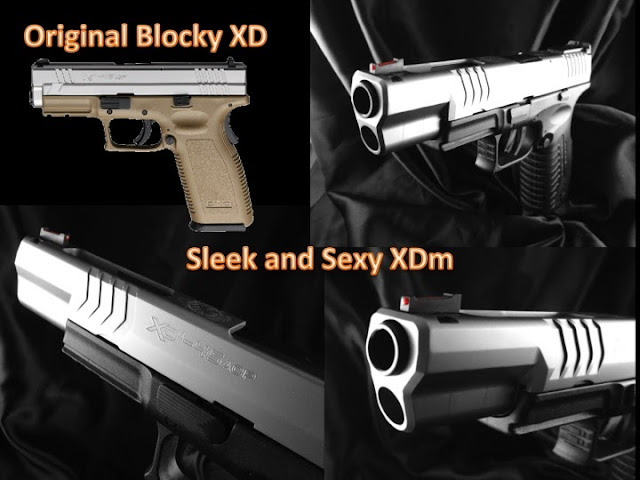 Many of the improvement from the XD to the XDm are easy to see.  The slide rails received a major engineering upgrade and now ride on top of the frame instead of outside of the frame.  This shaved the width of the pistol and made it just a little easier to carry concealed.  The shape of the slide was changed and the industrial "square-ness" gave way to a sleek and attractive slide that provided the opportunity to improve the cocking serrations both in terms of function and appearance.  Also gone was the pebble grain texture on the grips.  Springfield molded in a very aggressive geometric design that improves retention during recoil.

The XDm models come standard with some very functional 3 dot white sights with an anti-snag profile. 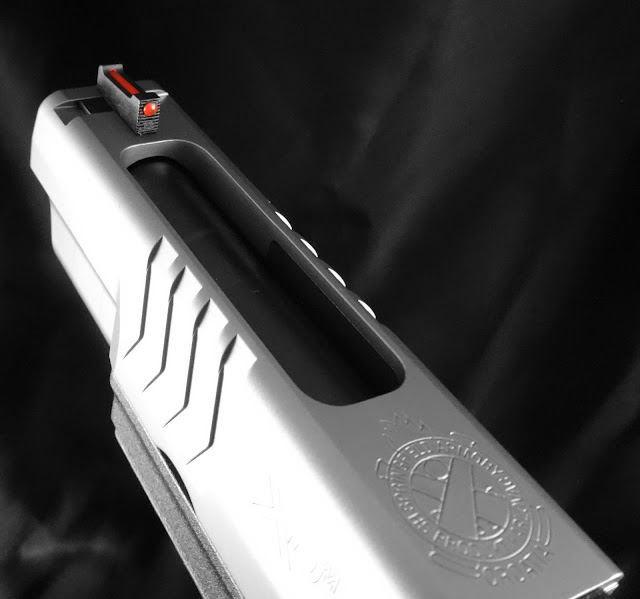 You can also see that the top of the slide on the 5.25 inch version has a section of the slide cut away.  This is done to provide the same great balance of the 4.5 inch model in the longer competition pistol.  Removing this section prevents a heavy front end feeling and helps keep the muzzle up and on target. 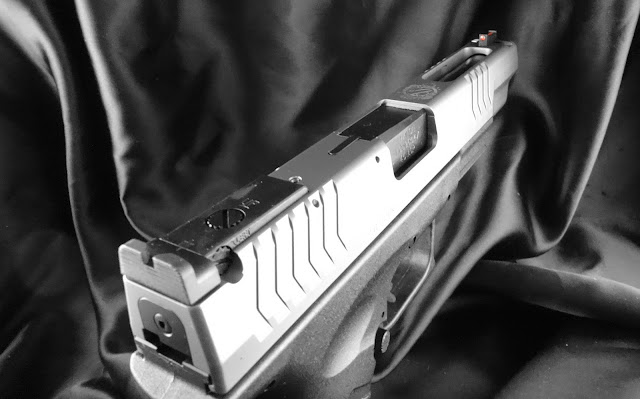 The rear sight is fully adjustable and the rear is serrated to reduce any glare it might pick up.

Another feature, already mentioned, is the fact that the XDm pistols feature match grade barrels as noted on the barrel below. 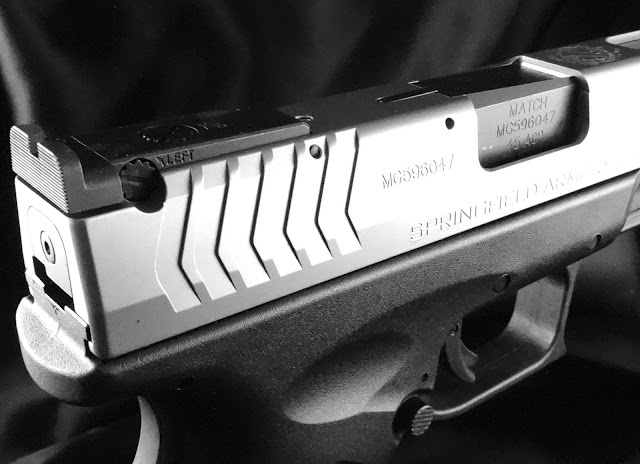 A couple of other improvements included interchangeable backstraps and the pistol was re-engineered so that it did not have to be dry fired in order to be disassembled.  This is a great safety enhancement as it helps protect from a negligent discharge if the shooter did not check the chamber before field stripping the pistol.

OK...we've had our XD history lesson and we've expanded upon the specification sheet...NOW FOR THE FUN!

While this Springfield 5.25 inch pistol was designed for competition it is also well suited for a fun day at the range.  It provides the accuracy of semi-custom 1911 that will cost you twice as much and in it's two tone configuration it is a handsome and eye-catching pistol. 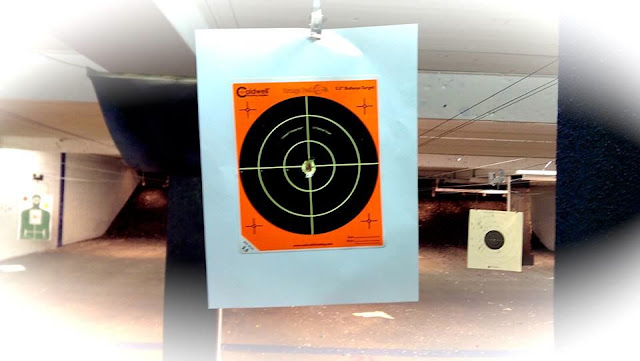 Above is the best "one shot group" I have ever fired.  This was shot at 30 feet with Mag Tech 230 grain ball ammo.  I immediately reeled the target in and snapped the photo with my cell phone to record the shot for posterity before I ruined it by continuing to put rounds into the target.

Here are two targets at 21 feet.  The first one was shot with five rounds and the second one with 10. 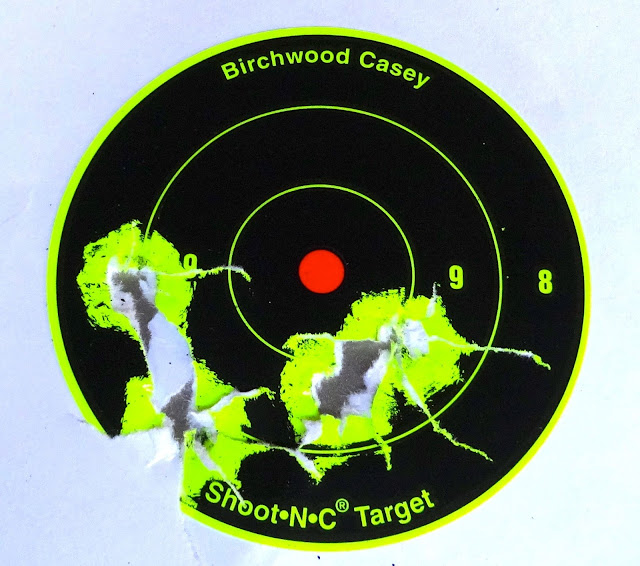 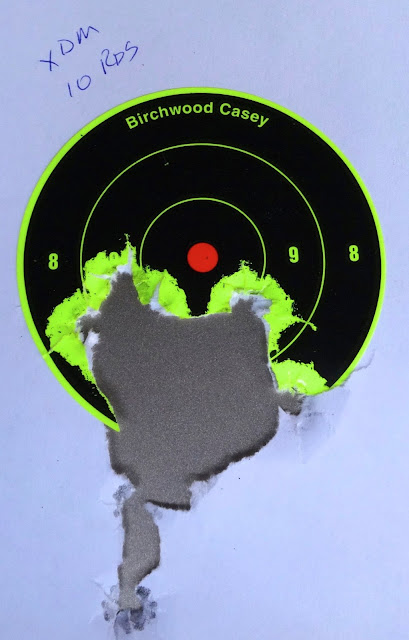 Here are two fired at 30 feet and yes, the first target is the continuation of the "one shot group". 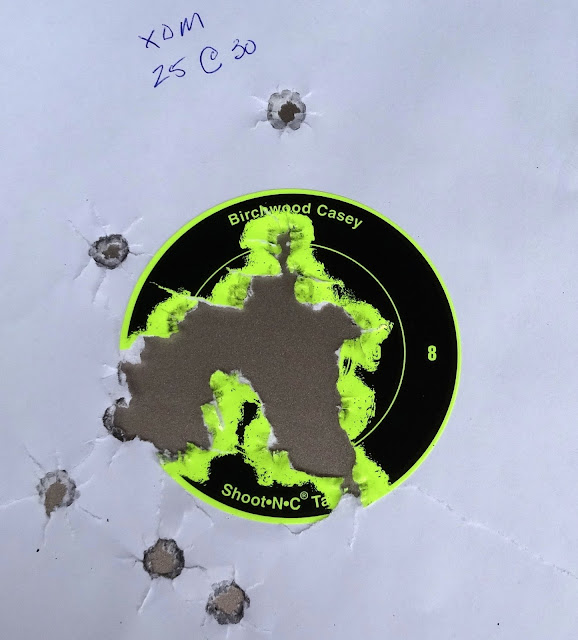 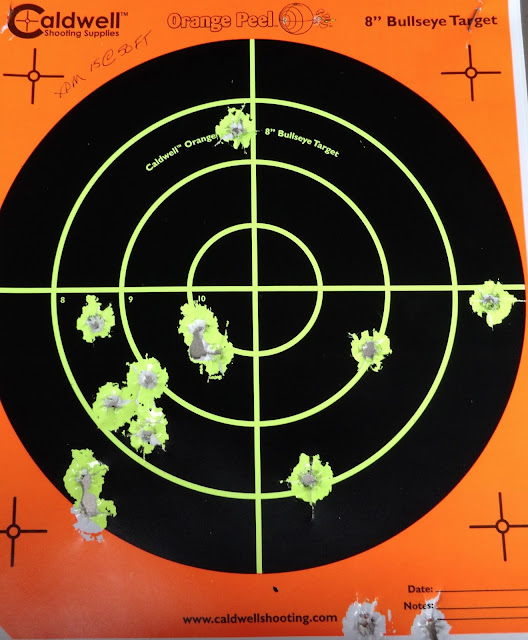 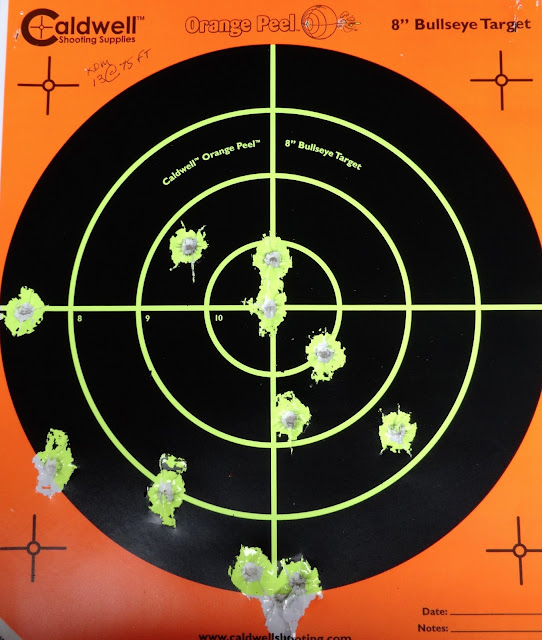 This pistol may have been built for competition but it is great fun to shoot.  There is nothing like punching big holes in paper with a .45 and this pistol is perfect for the job.  The red fiber optic is easy to see whether you're shooting outside or at an indoor range.  Recoil is minimal and the pistol comes back on target fast.  The only problem you'll run into is having enough ammo to feed your insatiable desire to shoot this pistol all day long.

Also, if you need a pistol to defend hearth and home you'd do very well with this accurate, reliable pistol that holds 13 + 1 rounds of hard hitting .45 ACP.

The 5.25 inch XDm comes in a nice polymer attache case that contains the pistol, three magazines (that's right--3), a Kydex holster, Kydex double magazine pouch, a different sized back strap and the requisite cable padlock.  All in all a great package!

If you decide you want to buy a 5.25 inch XDm (and by now you know you do) be sure you have plenty of spare time when you go to the range because you are going to have several people come up and want to know what you're shooting.  They'll want to see all the upgrades and they'll drop subtle hints that they wouldn't mind putting a few rounds through it...so buyer beware. 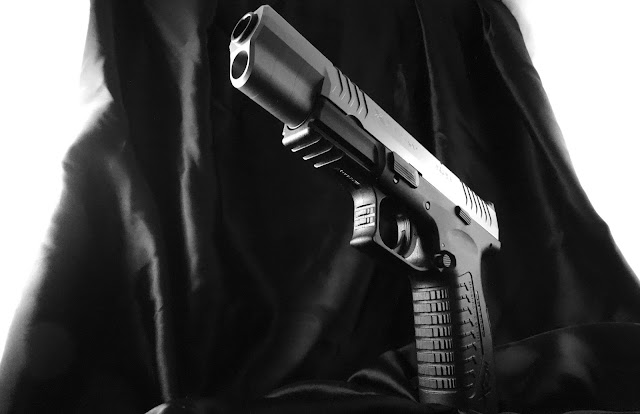 Posted by Average Joe's Handgun Reviews at 2:15 AM

I broke down and bought the 3.8 xdm 9mm and I have to say I now leave my glocks at home when I go out to the range. It really is a lot fun when shooting the xdm. And it does turn heads like he mentioned lol. I have a lot of people wanting to throw a few rounds through it before leaving. A very comfortable conceal pistol as well. I think I'm going to pick up the 5.25 as well. I promise anyone who decides on the xdm as there new all around pistol WILL NOT be disappointed. I'm really glad I made a great choice on this pistol. Happy and safe shooting!!!:D