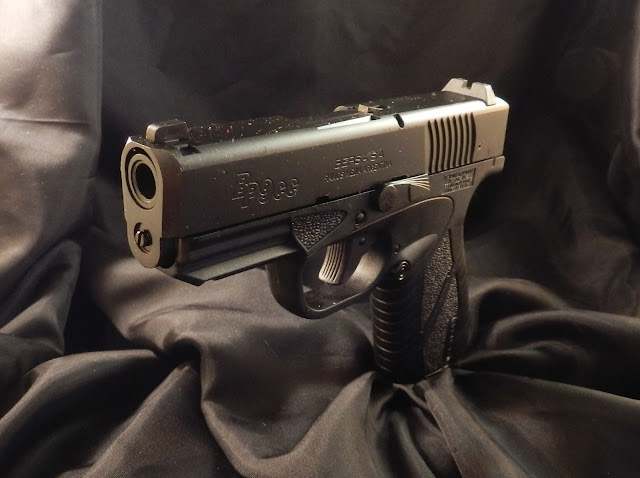 Third in our series of 2012 pocket pistols is the Bersa BP 9 CC (Bersa Pistol 9mm Concealed Carry).  This little pistol has a lot going for it.  First of all it is a 9mm  with the dimensions of the .380 and .32 ACP handguns that I grew up with; it's small.  Second, it holds 8 + 1 rounds of 9mm ammunition and when coupled with the 8 rounds contained in the small spare magazine you're sitting on 17 rounds at your disposal.  Third, the trigger pull is great.  Fourth, the pistol has excellent ergonomics.  Fifth, its purchase price is below $400.00.

The only way you cannot be interested at this point is either because you are not open minded to anything you do not already have or you are stuck in the mindset that anything from Bersa is cheap, Argentinian crap.  While it is inexpensive it is far from being crap.  Do a little research on Bersa and you will discover that the company was founded by several engineers from Beretta.  They started out making .22 caliber pistols but in 1994 they hit the big time with the introduction of the Thunder series of pistols.  The .380 Thunder is one of the most popular and economical .380's on the planet and had been the entry level pistol for many new shooters. 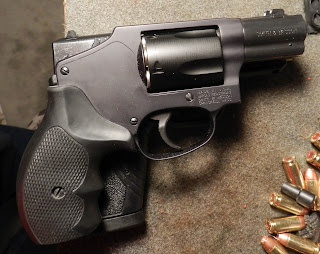 In terms of size it's overall length is less than the average "J" framed pocket revolver and it is certainly much thinner than the revolver with its bulky cylinder. In comparison to the Smith & Wesson Shield the Bersa BP 9 CC is .25 inches longer than the Shield. 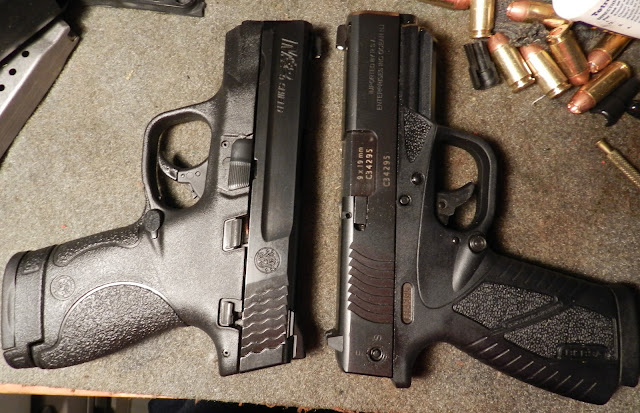 It is .2 inches taller than the S & W and is 2.5 ounces heavier.  The BP 9 is also .01 inches thinner than the Shield with a trigger pull that is 1 pound lighter than the S & W Shield.  The first comparative pistol that comes to mind when you see and handle the BP 9 is the Kahr P 9.  In terms of height and width they are almost identical.  The BP 9 is about a half an inch longer and gives you an additional round of capacity than the Kahr P9.  The real difference is in price.  The Bersa BP 9 has a suggested retail that is $310 less than the suggested retail of the Kahr.

The BP 9's trigger pull does take some explanation.  As is very popular today, the Bersa is a polymer framed striker-fired pistol using what Bersa calls the Short Reset Double Action Only Trigger.  Similar to the Glock the BP 9 has a passive safety feature built into the trigger.  On the Glock there is a small lever in the middle of the trigger that, when depressed during the trigger pull disengages the safety.  On the BP 9 the entire trigger is a part of the passive safety.  The passive safety is disengaged during about the first quarter inch of the one to two pound trigger pull.  At that point the pistol is capable of being discharged and the remaining short distance of the trigger pull takes about four pounds of pressure in order to fire the pistol.  Because of this some shooters describe the trigger pull sequence as mushy or stagy. I did not have the same reaction and found the pull to be quite good.  What everybody raved about however is the short reset for follow-up shots.  It is really short.  This pistol can be emptied very quickly.  That is being stated as a capability of the pistol but I do not recommend trying to set a land speed record for rapid firing for two reasons.  1. You will waste a lot of ammunition at the range trying to achieve a rate of fire that would replicate a fully automatic weapon.  2. Your accuracy rate will probably be pretty pitiful after the second shot.  A quick double tap is pretty easy to execute proficiently.  A quick..."octo" tap is not a good idea.

The BP 9 CC had a great feel to it when you first shake hands.  There is a nice curve to the backstrap that enhances the natural pointability of the BP 9.   At .94 inches wide the BP 9 is just a little too slim for me and a spare grip sleeve that I had on hand did a great jop of making the pistol easier to grasp.  The engineers at Bersa designed and incorporated an excellent slide stop release lever that is just large enough to be useful without adding any bulk or hindering the concealability of the pistol. 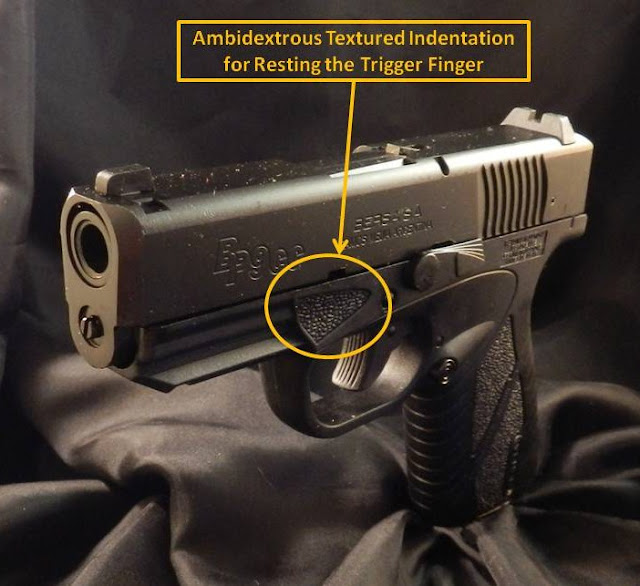 Bersa has also included an ambidextrous, triangle shaped, textured indentation on each side of the slide which provides a safe haven for resting the trigger finger until you are ready to fire.

The sights are the standard fixed variety with the usual three white dots affixed to them.  The rear sight is drift adjustable although it is fitted pretty tightly to the slide.

At the rear of the slide are a set of nicely scalloped serrations that make grasping and retracting the slide a piece of cake. 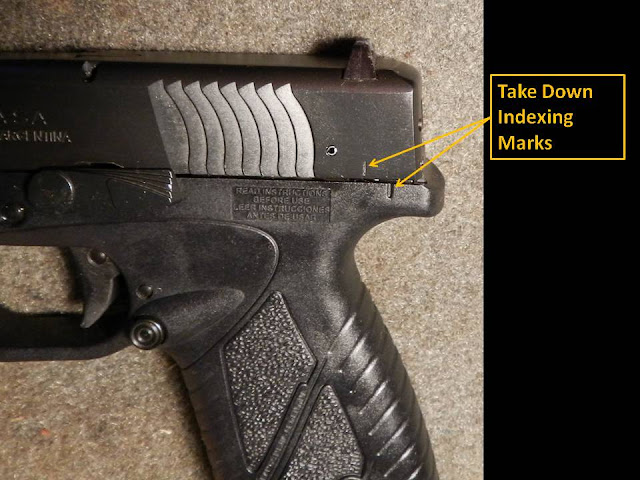 Disassembly of the BP9 is pretty simple.  Just line up the take down indexing marks, push out the slide stop level, push the slide off the front of the frame, remove the springs, guide rod, and barrel and you are ready to clean and lube the pistol. 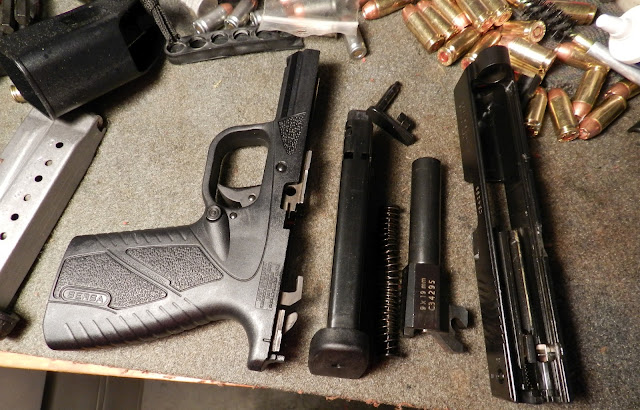 There are many holsters that will fill the bill but the BP 9 is an economical pistol and the price of quality leather holsters is off the charts so I wanted to pair the Bersa up with an inexpensive but effective means of carry.  Furthermore, although the BP 9 would wear very well on a belt holster I prefer to carry my pocket pistols...well, in my pocket.   Nothing is less bulky and more economical than this vintage Uncle Mike's pocket holster.  It worked just fine, keeping the pistol right where I needed it to be. 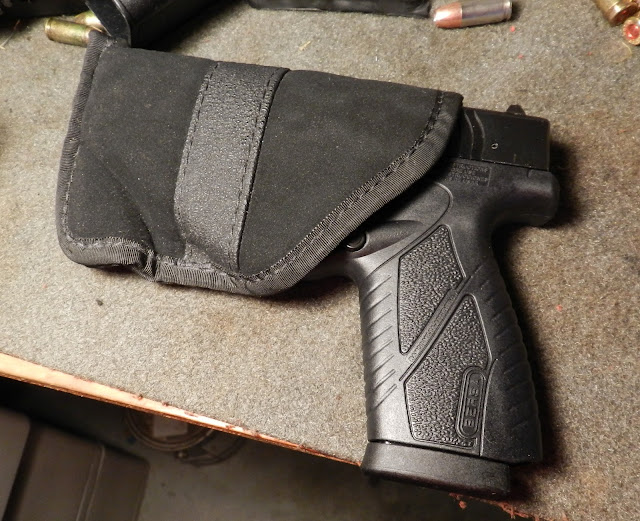 Overall I found that the BP 9 grouped better than the Smith & Wesson Shield.  Like most pistols I tend to shoot it a little to the left. 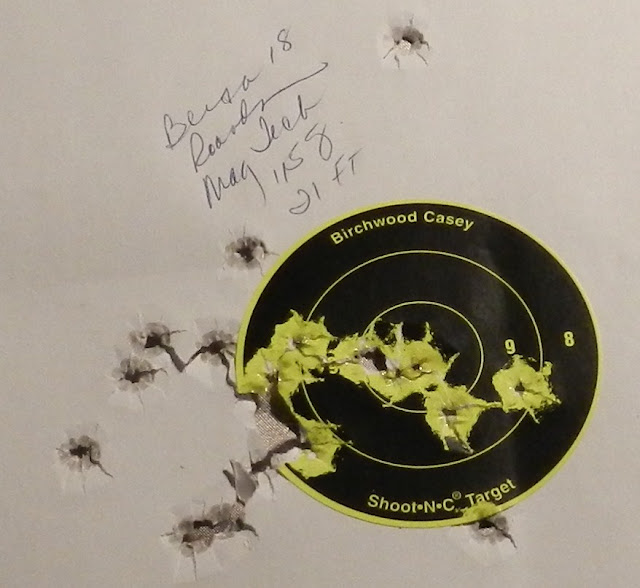 Here's another eight rounds of the same ammo shot at  the same distance.  I was aiming at the right side of the 9 ring in order to compensate for left shooting tendency. 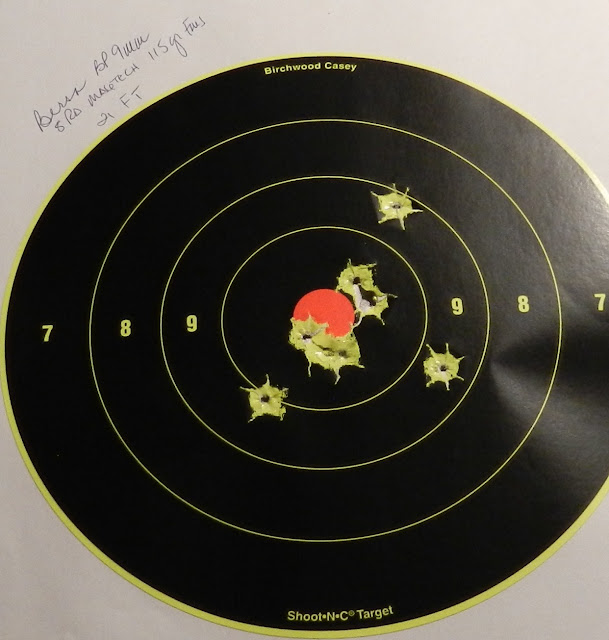 Here's 50 rounds of Federal 115 grain full metal jacketed ammunition fired at 21 feet.  As usual i pushed the shots to the left and the ammo shot a little low but they still grouped very nicely. 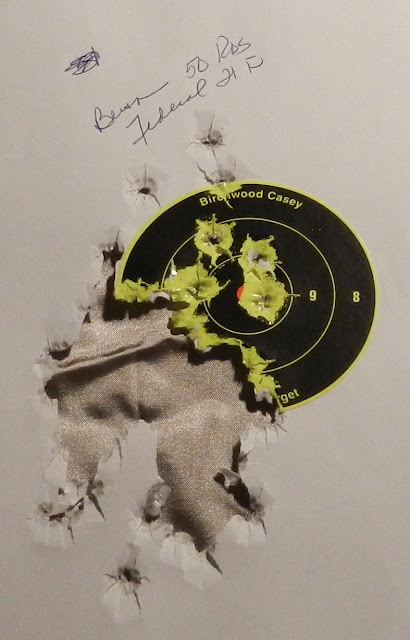 I believe that Joni Mitchell said it best in 1970 "don't it always seem to go, that you don't know what you've got 'till its gone".  All in all I really liked this little pistol and I kick myself for being too eager to trade it in order to acquire the next pistol, the SIG Model P938.  But there is good news here.  First of all the SIG P938 is a good pistol too and secondly, with the Bersa's gun shop price being between $379.00 and $399.00 it isn't going to break me to get it back!

Good review! Thanks... please don't take me for a "know it all" but you should remove "double tap" from you vocabulary and replace it with "controlled pair". I will make all the difference in a court of law. Prior infantry for four years and they nailed this into us bc "double tap infers that the second shot is reflexive and therefore not "controlled" and deliberate. I hate internet know it alls, so feel free to hate my comment :)

Im buyn da bp9 & I was just wondering im not a big guy im 6'0" & 160lbs I dont really have big hands but would it fit nice in my hands & will it be big enough to put on my waist holster?? Btw im 40-45cal type of guy I wanted sumthing different to carry one me.

Anonymous, yes it is large enough for a belt holster. As for how well it will fit in your hands it might feel a little small. If so there are grip sleeves on the market that you can slide over it. I prefer the ones from Pachmayr.

Would you trust your life to h bp9 reliability?

My girlfriend and I filtered our concealed-carry choices down to the M&P Shield 9mm and Springfield XDS 9mm sub-compacts, but we had a lot of range time left, so we tried as many other 9mm sub-compacts out as we could that were recommended by the staff. The last 9mm we tried was the Bersa BP9, and we stopped trying-out 9mm sub-compacts after that. The BP9 stood-out not only in the groupings we were achieving, but in the design of the frame (thin) and the TRIGGER. The trigger was probably the most noticeable feature because it was much smoother than the Shield and the XDS. Further, the magazines on this firearm are very nice and easy to load. There's no question, my girlfriend and I have found our concealed-carry choice, and did so for under $400. To be sure, we weren't price sensitive; we were willing to go into the $600-$700 range, but the Bersa was just better! The handling of this firearm quickly dispensed any suspicions behind our lack of familiarity with the Bersa name in comparison to household names like S&W, Springfield and Glock. Bersa really came out with an industry contender with the BP9 as far as sub-compacts go.

Sounds like you are using a little to much trigger finger. That will pull your shots to the left. That is if you are right handed. If your left handed and pushing to the left, it is because you have to little trigger finger. Try getting your trigger right under the back part of your fingernail. Should pull those shots to the middle. Just another internet know it all. Lol Good luck.

I just looked at the whole gaggle of pistols in the Bersa 9mm CC size range. The only thing that kept me from buying the Bersa was it's spongy trigger. It was better the the double action trigger on a Sig only because it had a shorter travel it sure wasn't as smooth changing weights though its travel. I would do but I'm at a point in life it'l do won't cut it any more. My old eyes need all the help I can find and a good trigger is big help. I'll talk to the custom shop Monday.

I like the sights best of all with the large dot on the front sight and much smaller ones on the rear sight. The lack of useless controls is welcome. If I get one I may put a lager head on one side of the magazine release if it doesn't loosen up pretty with use.I may build up the Slide release as well as my old hands have trouble with it's low relief. It would be great in young strong hands.

The S&W had the best trigger but I hard time tripping the slide release. I had a lot harder time taking it off Safe than I did accidentally putting it on Safe. IMHO a safety on carry gun is worse than useless, others feel differently.

Saw another review that mentions rust that showed up on the slide pretty quickly in a variety of places.

Anything you have observed that might contribute to this?