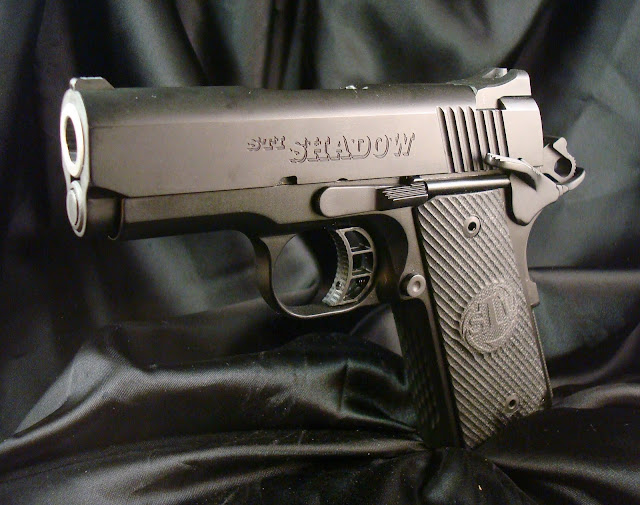 After reviewing the STI Rogue in 9mm (August 23, 2009) I wondered what STI could do for a .45 ACP.  The Rogue (and I urge you to go back and look at that review) is a very small 1911 9mm pistol that is beautifully executed, easy to carry, and more accurate than it has the right to be.  I immediately perused the STI online catalogue and asked the gun shop manager if he could procure an STI Escort.  It looked identical to the Rogue except for the 3 dot low profile sights.  For months upon months I waited, patiently checked-in, and the Escort never arrived.  However with their “New for 2010” models STI unveiled the “Shadow” and here is what STI says about it:
“Designed both by and for undercover LEO agents, the STI Shadow is a compact aluminum framed pistol with everything anyone needs in a backup pistol.
When Texas undercover narcotics officers started looking for the perfect concealable pistol, they came to the premier Texas pistol manufacturers. Based on their input, STI has come up with the STI Shadow- a light weight pistol that is as reliable as it is concealable.
The classic slide is 3.0" in length with rear cocking serrations & standard STI oversized ejection port. The 2 dot tritium night sights have been recessed into the slide and, along with the integral sight channel, provide the perfect compromise between easy sight acquisition and snag free carry. The STI Shadow is built on a forged aluminum STI officer sized frame with a stippled front strap. The grip includes a flat checkered polymer mainspring housing configured to provide excellent retention. The controls are STI’s single sided blued thumb safety and STI’s bobbed high-rise, blued, knuckle relief beavertail grip safety. The barrel is a 3.0" fully supported STI ramped bull barrel. The STI Shadow comes standard with an STI RecoilMaster guide rod system, STI commander hammer, and patented STI International trigger system.” 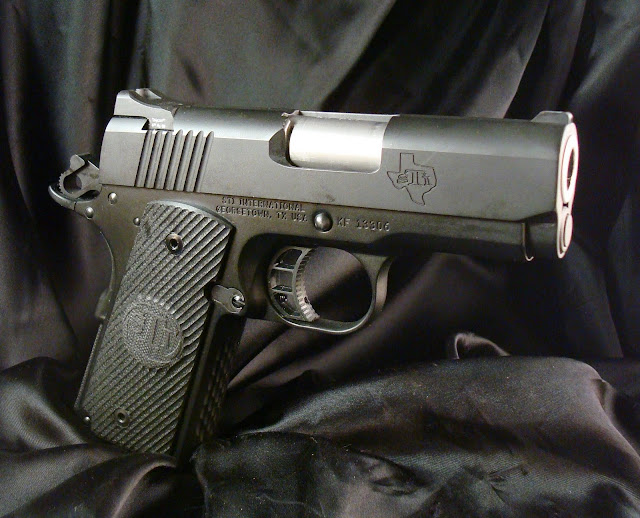 I asked the manager to order one and the Shadow arrived in one week.  Upon looking it over I had some misgivings.  She seemed larger than I expected.  This perception was enhanced by the thick rubber base pad at the bottom of the one magazine supplied (OK, every pistol manufactured should be supplied with 3 magazines, end of story).  Since, according to STI, this was to be a deep concealment pistol for undercover narcotics officers I was surprised to see the rubber base pad.  Anything rubber has the possibility of catching and hanging up on clothing during a draw or catching the cover garment and printing.  Rubber base pads are common on competition pistols but not usually seen on concealment pieces.  The finish is extremely utilitarian (which is gun writer talk for “not very attractive”) when compared to the Rogue and the Escort.  The Shadow also came with G-10 standard thickness grips.  I have never liked the feel of G-10 although it is a very tough substance and would be difficult to break or chip and is probably impervious to sweat, oil, or any other corrosive liquid with which it might come in contact.  I was also surprised that the grips were of the standard thickness when this is, again, a deep concealment undercover pistol.   That piece was no problem as I had a set of very attractive Esmeralda slim grips at home.
Along with the misgivings there were some positives in my initial meeting with the Shadow.  She tips the scales at 23 ounces unloaded which is light but she seems much lighter; the perceived weight for me was around 16 to 18 ounces.  She also sported Heine Straight 8 night sights.  I first encountered these on the Taurus 1911 and then the Night Hawk Ladyhawk.  They give you a quick sight picture and I like them a lot.
Here are the Shadow’s Specifications
STI Shadow At-A-Glance
Let’s examine the individual characteristics of the STI Shadow:
The Shadow feels very light although it is actually heavier at 22.8 ounces than the Glock G36 .45 ACP which weighs in at 20.11 ounces.  Although I am not recoil sensitive the recoil of the Shadow rocked me making quick follow-up shots difficult.  The other problem that I will lump under the “Handling” section of the review pertains to the pistol’s all too frequent propensity for ejecting hot fired casings into my forehead and square into the middle right pane of my glasses.  On the range this caused me (and other shooters) to flinch in anticipation of the shot which hurt both accuracy and follow-up shots.  In a real defensive shooting situation where safety glasses will not be worn the hot shell casing smacking me in the eye would probably cause temporary blindness which could be fatal if my first round did not end the attack.
The finish on the Shadow is an unattractive dull, matte black.  The STI website states that pistol is KG coated.  However it does not mention which KG product was used.  It is hardly abrasion resistant as wear immediately began to show on the slide rails, around the safety, and around the slide stop; in other words wherever metal met metal.  Now I know that abrasion happens when metal rubs against another metal part but I did not expect to see the amount of bare metal showing through after only 100 rounds.  Besides I have many pistols that have a lot more rounds through them that show no or very little wear. 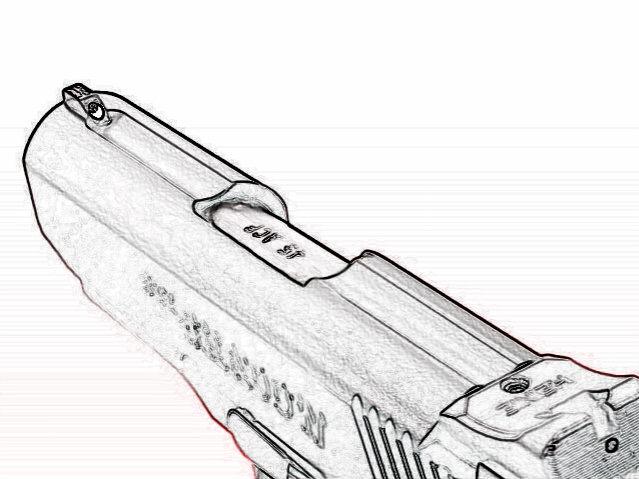 The night sights are the Heine two dot straight eight style.  As I mentioned earlier I have used these sights before and I like them a lot.  You very quickly set the dot on the front sight on top of the dot on the rear sight and you are then set to pull the trigger.  These are not the best sights for bullseye shooting competitions but they provide quite an advantage on a defensive pistol where the speed of target acquisition can mean the difference between life and death. 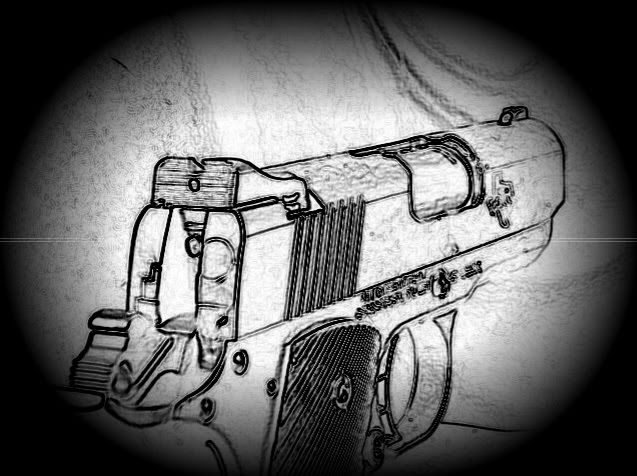 The trigger is very good with a slight amount of take up, crisp let off, and very little over travel.  According to my Lyman digital trigger scales it averaged 4.6 pounds which I think is just fine for a defensive handgun.
No need to belabor this point; it is a .45 ACP which has a proven track record for almost 100 years of being an accurate cartridge with the speed and mass to end hostilities in close quarter combat very quickly.
The Shadow is built around Colt’s 1911 Officer’s platform.  It is really too large for pocket carry (although with a well constructed deep pocket and a good pocket holster it could be done) but rides easily in an inside the waistband holster.  I perceive that the rubber base pad on the magazine adds too much length to the grip frame but it can probably be removed fairly easily and additional Officer’s length magazines will need to be purchased if you plan on carrying this pistol for self defense (never leave home without a reload and with this pistol I would say take two and if you don’t know why watch the HBO documentary Terror in Mumbai).
When I first began shooting The Shadow it would have been considered unreliable.  The slide failed to return to battery about two-thirds of the time that I pulled the trigger.  Although the STI manual said nothing about a break-in period I assumed that it may need one.  On my third outing at about round 450 it began to smooth out.  However it has never attained complete reliability.  Out of 100 rounds it will fail to return to battery somewhere between 3 to 6 times.  Unfortunately that means that the single purpose for this pistol cannot be leveraged.  It is a carry pistol and 94 to 97% reliability just does not cut it when your life is on the line.  An actual defensive situation will be wrought with confusion, lose of fine agility, and split second decisive moments and that is just if everything goes well for you.  Throw in a pistol that might not cycle and you have a recipe for disaster.
This was disappointing too.  I had hoped that the Shadow would be as hair-splitting accurate as STI’s little Rogue.   Although it grouped well it shot low at short ranges and it really shot low at distances.  Trying to compensate for the low impact by using Kentucky windage during a defensive shooting is no good; one needs to be able to trust the sights.  On the targets below I will mark the point of aim so you can see where the sights were pointed versus where the bullets landed.
21 Feet 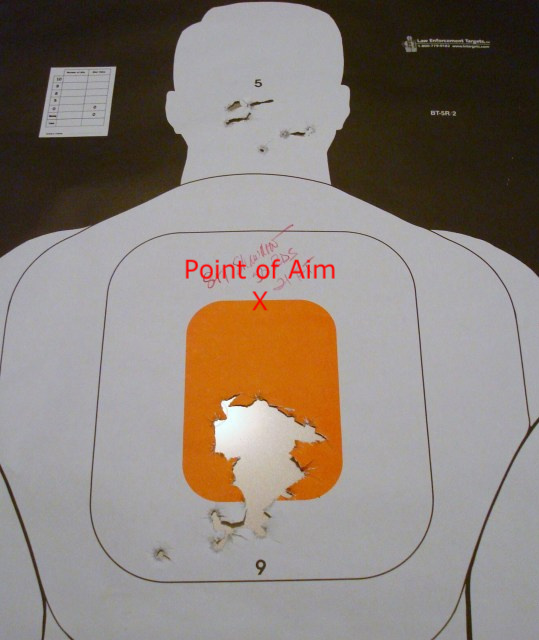 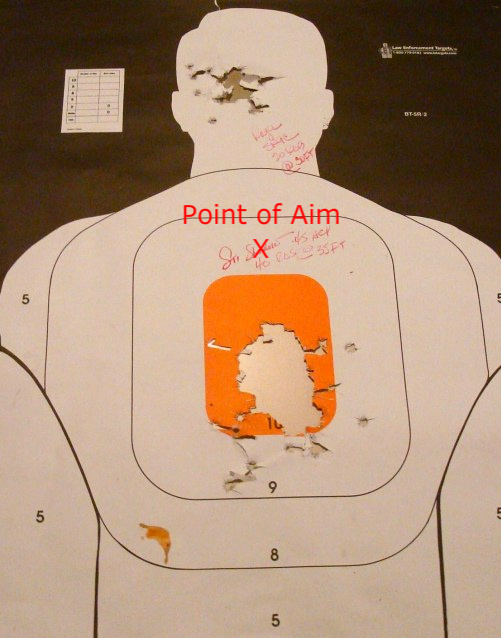 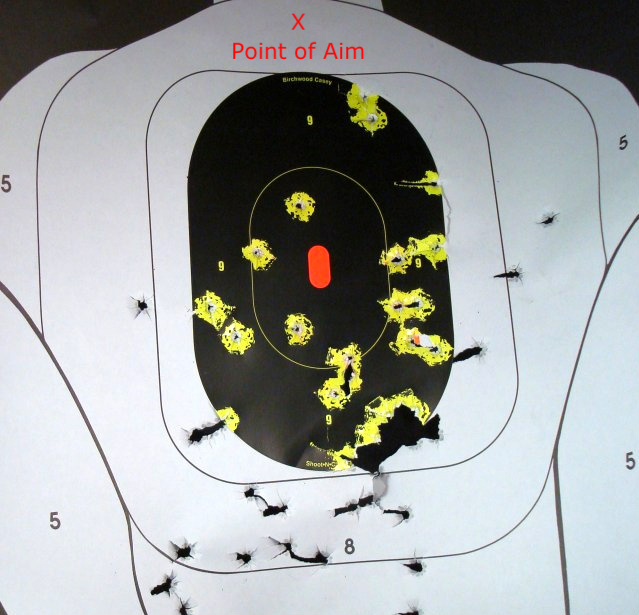 I have on layaway (pick up in 2 weeks) a kimber CDP ultra compact
3" 45 cal that I'm hoping will fit the bill that this STI could not.
I'm not aware that you've done a review of that particular pistol, but most reviews I've read have been positive.
Thanks for the review
Al

I owned an Ultra Carry CDP about 6 years ago. You should be very happy with it. I have a review coming up on the Kimber RCP that will be very favorable. I would love to find their new Super Carry models but it will probably be awhile before they become available.

I hate to seem shallow, but there is something about the styling of STI pistols that leaves me cold. The word "funky" comes to mind. I know that pistols are utilitarian tools, for the most part, and this is hardly a presentation piece, but stil am repulsed by the giant logos plastered all over the gun, a STI hallmark. I feel something that you presumably paid a fair amount of money for should look attractive in the hand. Their design program looks cheap in the same way that Keltec products, no matter how well they function, seem to me to scream funky and low-quality.

I don't think you are being shallow at all. The large imprint on the slides just isn't classy. Looking back at older Colt semi-autos, there is just the stamp of the model, caliber, and address along with a tasteful stamp of the Rampant Colt logo. Dan Wesson has several models where you really have to look closely to find the DW name.

One thing though, "perceived weight" is a new concept to me. If it feels lighter than it actually is, you a problem estimating weights. In other words perceived weight isn't an attribute of the pistol, so why mention it? I'm just curious, no trying to be a jerk...

Keep up the good work

Thanks for reading and fair question. The main point is that it is a very light weight pistol and, holding them side by side, it felt lighter than the Glock 36 which actually does weight less. I figured it the professional gun writers can write about "perceived recoil" then I could talk about how the pistol feels lighter than it actually is.

Thanks for the question.

My Kimber has never failed period, I use the new KimPro II Mags and @350+ rounds, its break-in period, not a single problem, I trust my 1911 .45 with my life. I don't carry yet because I have a 500 round test cycle I won't break, one more range day and it'll be carried.

I've owned 4 Kimbers and all have failed me. I am going to give this STI a try. Looks like a great pistol