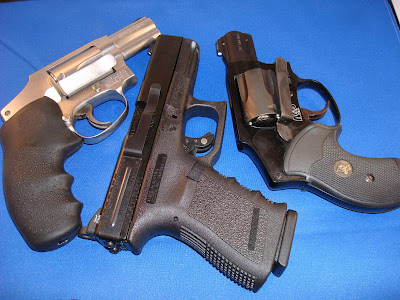 Having never carried a firearm professionally the concept of carrying one concealled has been quite foreign to me. Carrying has made me self-conscious, feeling that everyone could tell I was packin' a pistol. Shoulder, outside the waistband, and inside the waistband holsters all required a jacket or other outer garmet to finish the concealment process. I even tried one of the inside the waist band “tuckable” holsters which still gave me the perception that anyone with average observation skills could see the bulge.

For awhile I was comfortable with carrying a Colt Government .380 ACP Pocketlite model in the inside breast pocket of a kakhi Filson vest. That lasted about a year until the 5.11 vests became popular and then everyone was sporting kakhi vests which kind of screamed “Look at me! I’m packin’, shoot me first”.
I eventually tossed aside my vest for a pocket holster. First an Uncle Mike’s, then eventually upgrading to a DeSantis Nemises. This was workable but required fairly large pockets. I was concerned that the little .380 or the small Smith & Wesson “J” frame revolver were noticable but, if they were, no one ever mentioned it.
For six months I passed the “Clip Draw” attachment devices neatly pegged on the wall of the gun range and often looked them over never making up my mind to give them a try. Finally it hit me that it was only $20.00 and if I didn’t like it, I could always find someone to give me a couple of bucks for it. Fast forward and as I am typing this my S&W Model 340 M&P .357 Magnum is sitting very comfortably inside my waistband, just behind my right hip, securred there by a Clip Draw and concealed under my Nike polo shirt. I now have a Clip Draw also attached to my S&W 640 .357, and my Glock 19C, 23, and 36 in 9mm, .40 S&W, and .45 ACP. 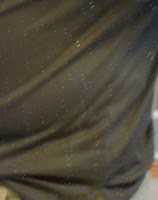 The Clip Draw provides three distinct advantages:
1. It holds the handgun close to the body.
2. There is no added bulk of a holster inside your waist band.
3. Can easily be concealed under any shirt that can be worn untucked, however a small “J” frame will also ride pretty inconspicuously with a shirt tucked it.
4. I have encountered no hang-ups when drawing in practice.
When going into the stall of a public restroom you can easily slip the handgun into your pocket so that it is not visible underneath the stall should there be any Idaho Senators peering underneath. With a holstered handgun you would have to remove the entire rig and risk leaving the holstered handgun on the back of the toilet or on top of the toilet paper container.
The Scandium framed model 340 is a piece of cake to conceal and I genuinely forget that it is there. Happily, I can also fairly easily conceal a baby Glock (the model 36) and the mid-size models ( the 19C and the 23). All that it requires is a somewhat looser and thicker shirt (and with all models you will want to avoid lighter colored shirts as the contour of the handgun is more easily spotted).
There are a few minor caveats with the Clip Draw:
1. It is not easy to reholster quickly, larger handguns may require two hands. (However I do not see this as a huge problem as, if I need to defend my life with the handgun, I am not going to be worried about holstering the weapon so I can handcuff the perpatrator.)
2. A Glock should not be carried with a round in the chamber unless you employ a device to block the trigger movement.
There is always the chance that the trigger could catch on something as you are slipping the handgun into your pants. Now, this is very remote with the longer, heavier trigger pull of a revolver, but the lighter pull of the Glock, which has no manual safeties, could pose a problem. If you do not do something to block the trigger and it catches, you could wind up shooting a hole in your pants, your buttocks, leg, foot, or for the truly talented and unlucky, a combination of the aforementioned unintended mishaps.
Not to fear, there are two devices to help with this. Clip Draw provides another handy little $20.00 item which is called the Saf-T-Block. This is a curved piece of plastic that snaps in behind the trigger to block it’s movement. There is an allen head hex screw which allows you to adjust the amount of tension it will take to press the Saf-T-Block in and push it out. Upon drawing the pistol, your trigger finger merely pushes the device out the left side of the trigger guard. It is actually surprising how well this device functions. As it it under tension, your pressure when pushing it causes it to very positively snap out. Clip Draw makes them in both right and left handed models and, as an added bonus, there is a hole in the portion of the device that come through the trigger allowing you to insert a small padlock which gives you greater safety if storing the pistol in either a loaded or unloaded condition. There are two inherent drawbacks to the Saf-T-Block. First it is a stand alone device is small and is black in color, therefore it is easy to misplace, especially when laying around inside the darken grey interior of a gun safe. Secondly, use of the device requires practice since this is a manual safety and its location, behind the trigger, is counter intuitive to those of us used to frame mounted manual safeties. However, what I like best about the Saf-T-Block is that it is very evident when you place your finger onto the trigger that it is 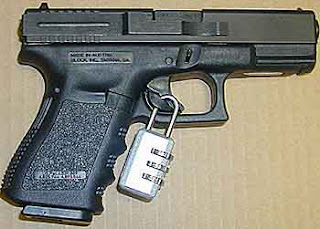 The second safety device is the Side Lock Trigger available from Lone Wolf Distributors for about $50.00. This is a fully functional replacement trigger with a small, chrome button imbedded in the sides of the trigger. In the right handed model, push it from left to right to block the trigger and push it from right to left to unlock the trigger to fire. The advantage to this system is that the safety is a part of the pistol’s mechanism and cannot be removed and misplaced. Again, it requires practice to engage and disengage especially since it is not evident that the Side Lock is in place when moving your finger to the trigger. 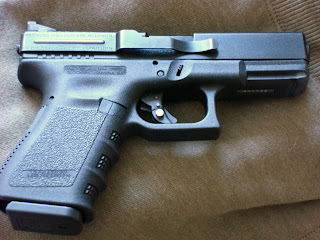 The Clip Draw devices are made to fit Smith & Wesson "J" frame revolvers and are affixed by screwing the device into the slide plate on the right side of the handgun (appropriate screws are provided) and they come in black and silver to match your blued, stainless, or nickel plated handguns. They also have versions to fit various sized 1911 pistols (the device fits under the right grip panel) and Glocks by replacing the rear striker panel withone that had two screw holes drilled into it. These can be attached in about 3 minutes and, if you carry something other than the prior mentioned handguns, Clip Draw makes universal models for both pistols and revolvers which attach the device via an adhesive tape.
Posted by Average Joe's Handgun Reviews at 9:16 PM