Requiem For The Revolver 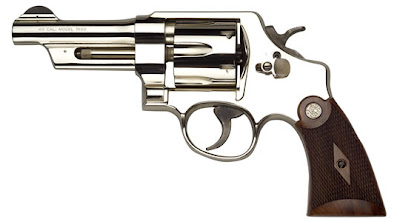 The swing out cylinder six shooter (or five shooter, or seven shooter, or eight shooter) is as passé as the buggy whip, spats, and rumble seat. No one with any firearms knowledge sports a wheel gun anymore. The military abandoned the revolver in 1911, police departments followed suit some 70 years later, and no self respecting street gang member would be caught dead (hmm…”street gang members caught dead”…that’s an interesting concept) without his beloved Glock .40. And, it is easy to see the appeal of the semi-automatic pistol. They hold more rounds of ammo, are faster to reload, and, being slimmer than a revolver, are easier to reload. Lastly, the semi-automatic pistol, especially the single action variety, can be faster and more accurate to shoot due to the fact that their trigger pulls are shorter and lighter than revolvers. So, the revolver is dead, right?

Wrong! The revolver is very much alive and well & has a lot to offer. First and foremost is reliability. As Col. Jeff Cooper often stated, “a combat pistol must be utterly reliable”. Revolvers are not ammo sensitive and fewer, moving parts that can get out of alignment or stall due to a lack of proper lubrication or interference from lint, dirt, etc. There will be no failures to feed, double feeds, failures to eject, failure of the slide returning to full battery, etc. A revolver jam is highly unlikely but possible. In my 32 years of shooting this has occurred only once as documented in my July 2006 posting about the scandium weight, short barreled S&W model 325PD entitled “Big Bore Revolvers”:


"On my second cylinder full of Independence .45 ammo, the cylinder locked-up after firing the second round. The culprit was ammunition where the bullet had not been properly crimped into the brass. When this little revolver takes the shock of having .45 caliber explosions going off the bullets began coming unseated from the brass, causing them to stick out of the cylinder and causing the upcoming round to bang into the forcing cone.”

However, if the revolver does jam, you merely open the cylinder and remove the offending round. If round does not go off, you merely pull the trigger again and fire the next cartridge. Jams or rounds which fail to fire in a semi-auto, depending on the type of jam, can require a complex and time consuming process to clear the pistol and make it operational again. Not something you want to happen under the stress of a life or death situation when every second counts. Semi-autos can also jam if the gun is not held tightly and the shooter’s wrist is not locked in place. “Limp wristing” as it is called does not give the recoiling pistol a firm enough backstop to push against as the slide is cycling through the process of ejecting the fired round and the chambering the next cartridge. This doesn’t happen with the revolver. The revolver will fire with any grip tension and in any position. If you hold it sideways it will fire, if you hold it upside down it will fire; accuracy will certainly suffer putting others at risk so I do not advocate shooting sideways and upside down; I merely mention it as an example of the reliability of the revolver.

Another advantage of the double action revolver is safety. The double action has a longer and heavier trigger pull than all single action and many double action semi-automatic pistols. Like a lot of choices in life there are trade-offs. The single action semi-auto has a very short and light trigger pull, usually between 2.5 and 4 pounds. While this can enhance accuracy there is the safety trade-off of an accidental discharge. During the stress of a perceived life or death encounter vision, muscle control, and fine motor skills are affected. I love single action 1911s but would never carry one as I have experienced several accidental discharges during casual practice at the range; this even happened a few times with the very light double action pull of the Para Ordnance LDA pistols. A longer and heavier double action trigger pull may cause the shooter to move the handgun to the right or push it to the left depending upon where the shooter places their finger and how they pull it back. This could cause the shooter to throw the shot off target and could place an innocent bystander in jeopardy. How do I compromise on this issue? Well I go back to Col. Cooper again. After utter reliability, his next requirement for a combat pistol was a manageable trigger. Therefore I select handguns with the mid-range of trigger pulls. The 2.5 pull on most 1911 cannot be considered manageable for a combat arm if it increases the risk of an accidental discharge. Similarly, I have seen some double action revolvers and semi-autos with horrid trigger pulls of 12 to 14 pounds. I would not purchase, let alone carry one of those. I prefer to look for a pistol with a pull between 7 and 10 pounds. It is light enough to shoot accurately and heavy enough to assist in mitigating the chance of an accidental discharge. I also do not advocate having a gunsmith lighten a carry gun’s trigger pull. A zealous prosecutor or plaintiff’s attorney could paint you as a reckless, gun nut for modifying the factory’s original design in any subsequent legal proceedings.

Far from being dead, the double action revolver is actually in the midst of resurgence. One of the reasons could be nostalgia. When you think of nostalgia and handguns you probably envision the Colt Single Action Army revolver introduced in 1873. However, one should not overlook the extremely popular Smith & Wesson medium sized revolver. Smith & Wesson ushered in the modern era of revolvers back in 1896 when they introduced their revolutionary “Hand Ejector” model which incorporated a swing out cylinder with an integral ejection rod that positively expelled all six cartridges at once. In 1899 S&W brought out their medium framed model M&P in .38 special and that revolver quickly became a police staple. Their medium sized revolver designated as the “K” frame also served the military in WWII, Korea, and was the tool that the Army’s tunnel rats employed when jumping into the vast underground Viet Cong passageways during the Vietnam conflict. That basic design from 1899 is still represented in their line-up as the model 10.
When you go to the S&W website you will immediately see that hunting or protection from big game is a niche that they are filling with their .41 and .44 magnum N frame handguns and also with their .460 and .500 S&W X frame revolvers. The remainder of their revolver offering is clearly designed for providing potent calibers for protection against two legged aggressors. This includes their .357 magnum, .44 Special, and .45 caliber N frames service sized guns, their medium sized K-L frame revolvers primarily in .38 Special and .357 Magnum, and the extremely popular small J frame handgun most of which are chambered for the .357/.38 (with a few in .22 long rifle and .22 magnum) . The small J frame is quite possibly the most popular concealed carry handgun in production with Smith and Wesson cataloguing 37 different J frame revolvers, including 3 models which are a part of S&W’s “new-for-2007” Classic Line. The Classic Line proves that nostalgic handguns do not necessarily mean cowboy guns.

And the “Classic line” leads us to the subject of today’s review; the Smith & Wesson Classic, Model 22 in .45 ACP. 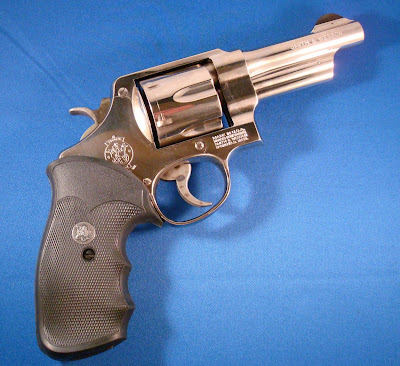 You might look at this nickel plated beauty and say “Joe, didn’t you already review this handgun?” Well…close to it; on September 8th I reviewed the nickel plated Model 22-1917 and really liked it. Here’s how I came to acquire its little brother. After the very poor results I experienced with the Glock Model 21 SF (see the posting on October 8, 2007) I decided to immediately trade it off. When I arrived at my new favorite gun emporium (J&S Custom Guns of Lakeville, MN) I wanted another .45 and was delighted to see that they had the 4 inch Model 22 in nickel to match my 1917. In examining this Model 22 at the shop I found that it had about the best trigger pull on any recent, non-custom tuned, S&W revolver I had handled. It was very smooth with a Goldilocks trigger (not too hard, not too soft, but just right). The deal was done and I was on my way with the new revolver.


The longer barreled model 1917 was originally produced for our armed forces in WWII because Colt did not have enough machinery to produce all of the model 1911 pistols that the American Expeditionary Forces needed. Once the Great War was over the returning veterans thought the .45 ACP cartridge was a good thing and Colt 1911s were still in short supply on the civilian market. As consumer demand was there; S&W produced a .45 ACP revolver on their large “N” frame as the Model 22 (later changed to the Model 1950). The model 22/1950 stayed in the Smith & Wesson line-up until 1966. By then Colt 1911s were in full production for those who desired a .45 for self defense. For those who had been using the .45 ACP as a hunting or big game protection gun opted for the newer .357 and .44 magnum revolvers in the Smith & Wesson stable. 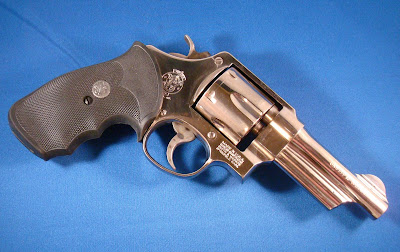 Just like the newly re-introduced model 22-1917, the shorter barreled model 22 is a pleasure to shoot. The factory supplied wood grips are very attractive but do have a tendency to impede the accuracy of which is revolver is capable; their vintage profile does not give the shooter much to hold. A set of Pachmayr Decellerator grips does wonders. The blue front sight is easier to see than you might imagine, the trigger pull is very good giving you fine accuracy at combat distances. This is both an attractive and intimidating handgun. 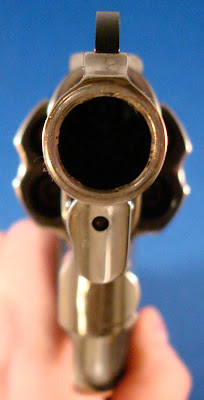 To an errant home invader that big barrel must look like a sewer pipe. (Please note: pointing a loaded revolver at yourself in order to get a photo would be dangerous and a violation of even the most basic safety rules.
The revolver in this photo was unloaded. The camera was mounted on tripod with the image feeding into an external monitor and I was standing beside the revolver, not in front of it. Pointing the firearm at yourself is both dangerous and reckless. I acknowledge that some may still be uncomfortable with this photo and I do not discount their opinion.) 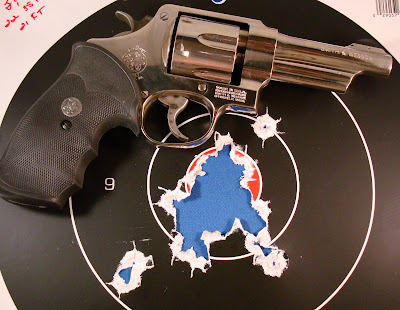 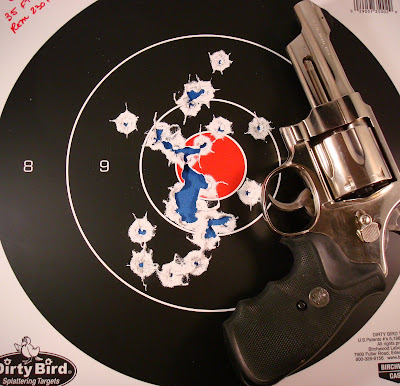 This revolver looks and shoots like it means business.
Posted by Average Joe's Handgun Reviews at 9:25 PM