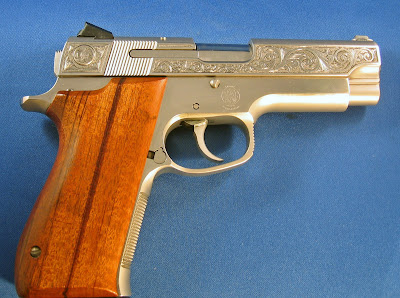 Today we review a S&W Model 1076 10mm pistol. Cliff, who you have probably come to realize, is one of the local Boise gun dealers and consistently comes up with unusual firearms. Many of these have been family owned firearms and are being sold to raise cash or are estate weapons sold after the owner passes on. Cliff seems to do a good business in this realm and it is undoubtedly due to his service and fair business practices. Whether Cliff is buying the firearm outright or putting it up on consignment you always get a fair deal. I will miss Cliff dearly when we leave Boise in June…my wife will probably be very happy.
This used model 1076 falls into the estate category. As Cliff tells it, this was the service pistol of an FBI agent. When the FBI discontinued the use of the 10mm handguns agents were given the option of acquiring them as a personal purchase, as was done by this agent. Upon his retirement from the Bureau, the agent’s wife sent the pistol to Smith & Wesson to be engraved and fitted with wooden stocks. Although there was no accompanying documentation to verify this provenance I do not doubt the story. The 10mm line of Smith & Wesson pistols were only manufactured from 1990 to 2001 and the 1076 was discontinued in 1993 so it was not extremely popular, most likely due to its caliber. Therefore it would seem plausible that the retirement of a career FBI agent might merit the expense of the factory engraving. 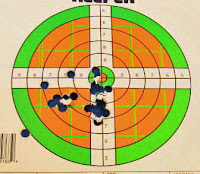 (Target to the left was placed at 21 feet and fired at with 20 rounds of Cor Bon 165 grain Jacketed Hollowpoint Ammunition.)

The Smith & Wesson 1076 was one of the 10mm pistols in the S&W 1000 line-up, all of which were made of Stainless Steel. First up was the 1006 which had a 5 inch barrel and sported either fixed or adjustable sights. Then came the model 1066 which differed only in the fact that it utilized a 4.25 inch barrel and corresponding shorter slide. The 1076 was produced at the request of the FBI. It was identical to the 1066 except for the decocking lever which the FBI specified needed to be located on the left side of the frame rather than on the slide. This put the lever in a more ergocentric (I’m not sure but I may have just invented a new word) location where it is just in front of the shooter’s thumb. This probably helped the shooter remember to decock the pistol before holstering. 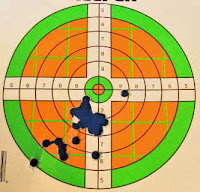 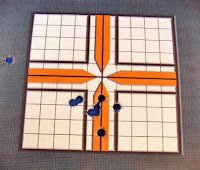 (Targets to the left were placed at 21 feet and shot with CCI Blazer 200 grain Total Metal Jacket Ammunition. The first target was shot with 20 rounds the second with 9.)

The FBI chose the 1076 after the infamous Miami shootout in April of 1986. If you don’t remember the specifics, there are several web sites that do a great job of relaying the incident. This is a good one http://www.thegunzone.com/11april86.html and google can help you find more. In a nutshell, the FBI’s robbery unit was in search of a 2 man team that had been on a grand robbery spree. When they caught up with them on a side street, the robbers were not going to go quietly. While the FBI vastly outnumbered them, the robbers were in possession of superior firepower. The agents were carrying the standard issue, which at the time was the Smith & Wesson model 459 loaded with Winchester Silvertip 115 grain 9mm hollowpoint ammunition. Some of the agents still carried their S&W model 13 revolvers loaded with 158 grain +P hollowpoint ammo. Unfortunately the bad guys were armed with .357 magnum revolvers, a 12 guage shotgun and a Ruger Mini-14 caliber .223 rifle. In the ensuing melee 2 of the agents were killed and the remainder were critically wounded. Post mortem autopsies found that the robbers had been hit many times with some of the shots hitting vital areas that should have ended the fight. The FBI came to the conclusion that they needed a more powerful cartridge. 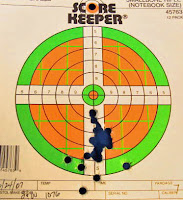 (Target to the left was placed at 21 feet and shot with 18 rounds of American Eagle 180 grain full metal jacket ammunition.)

The search began and they examined different 9mm and .38 special loads. Many reports have it that they were about to settle on the .45 ACP (a battle proven choice) but decided on the new 10mm cartridge that had been developed by firearms expert and author Colonel Jeff Cooper and the Norma ammunition company. The original load for the 10mm was a 170 grain bullet unleashed at 1358 feet per second. 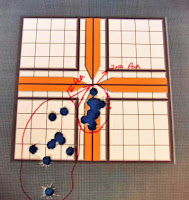 (Target to the left placed at 21 feet and shot with 20 rounds of Buffalo Bore 180 grain Gold Dot Jacketed Hollowpoint ammunition. The first magazine full of this ammo went to the lower left when the Point of Aim was the dead center. I changed the Point of Aim with the second magazine to the upper right corner of the cross section which provided the slightly low but well centered group. Buffalo Bore produces very hot and vey serious speciality ammunition. This load produced the most recoil of any tested and pretty well replicates the original Norma 10mm load. The Buffalo Bore load leaves the barrel at 1350 feet per second with 782 foot pounds of muzzle energy. Buffalo Bore ammo is favored by handgun hunters and if you go afield into the wilds of Idaho looking to bring down a Ram, Impala, or Chevy Malibu the Buffalo Bore ammunition is just the ticket.)
The Model 1076 is a very good pistol but the FBI’s 10mm program was doomed. First, they found that the original Norma load was very hard on their test pistols which were converted .45 ACP 1911s and many of the agents found the recoil to be uncontrollable. Second was the size of the pistol. This is a large pistol and again, many of the agents with smaller hands had a difficult time handling the handgun during the sustained firing of their qualification process. To measure this I placed to calipers on the 1076 and compared it to my Taurus P1911:
Taurus P1911 versus S&W 1076
Slide Width .93 of an inch versus 1 inch
Grip Width 1.10 inches versus 1.3 inches
Grip Depth 2 inches versus 2.25 inches
The differences may not seem much it is substantial when holding the 1076. Although the FBI could not do much about the size of the pistol they requested that the velocity of the bullet be reduced from 1358 feet per second to 980 FPS thus earning this reduced load the nickname of "FBI Lite". 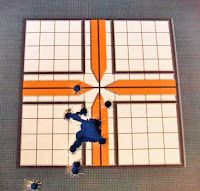 (Target at the left shot at 21 feet with 20 rounds of Hornady 200 grain JHP/XTP ammunition.)
So What About This Pistol
This specimen is engraved on the sides and top of the frame and it is both very tasteful and expertly executed. The nice thing is that as the 1000 series of pistols were all stainless steel, there is no worry about wearing through the finish had this been a blued or nickel plated handgun. The sights are of the fixed Novak type 3 dot variety. The hammer is bobed and there is nice checkering on the front strap and the front of the trigger guard. The presentation Hogue grips are nice but bulky. I would love to find a set of slimmer, checkered replacement grips that is probably going to be difficult as the 1000 series was discontinued in 2001 and not made in great quantities.
Shooting Impressions
In shooting the 1076 I found no problem with recoil at all even when shooting the smokin' Buffalo Bore ammo. The pistol is obviously well designed to handle the hot 10mm ammunition. Overall the rounds tended to land a little low and to the left but this is more than acceptable combat accuracy. 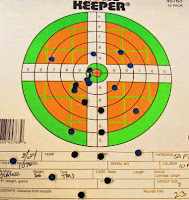 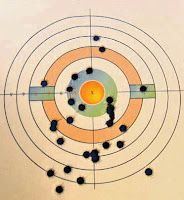 (Targets to the left were placed at 50 feet with 23 rounds of CCI Blazer 200 grain TMJ ammo being fired at the first target and 30 rounds of 200 grain FMJ American Eagle ammo fired at th second.)
Posted by Average Joe's Handgun Reviews at 12:03 AM