Today’s Range Report is just for fun. A relaxing morning at the range spent with a couple of Smith & Wesson revolvers just plinking away at some fun targets. 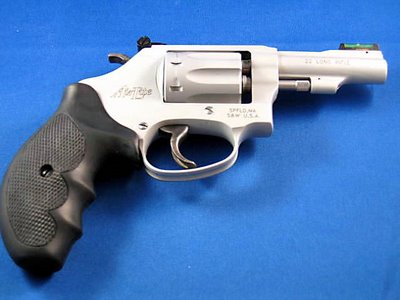 The first revolver is the Smith & Wesson Model 317 in .22 Long Rifle. This is an ultra light weight handgun and here are the technical specifications:

This is a comfortable revolver to carry and to shoot. Recoil is hardly an issue, the rubber grips fit my hand very well, and the green fiber-optic HI-VIZ front sight is easy to see. Even though this revolver is produced on S&W’s small J-frame they have managed to squeeze 8 rounds into the cylinder.

Fortunately this revolver comes with adjustable rear sights. I had tried several brands of ammunition CCI Stinger, CCI Velocitor, CCI Quick Shok, CCI Blazer, and Federal Game Shok. The CCI Quick Shok and the Federal Game Shok turned in the most consistent groups which allowed me to dial the sights into my point of aim. The groups were somewhat disappointing in light of Smith & Wesson’s website information about this revolver which states:

“Smith & Wesson's line of Rimfire revolvers is the perfect choice for competition, plinking and small game hunting….The small frame Rimfire is built on an aluminum alloy frame with a 2" or 3" barrel, chambered for .22 LR, is perfect for target competition.” Target Competition? I don't think so!

The targets shown here were all shot with Federal Game Shok ammunition which has published ballistics of 1240 feet per second and 137 foot pounds of energy.

The first target was placed at 21 feet. I do not recall how many rounds were fired at it; I was plinking and when plinking you don’t count. I can tell you that it only took 3 rounds to hit the small quarter sized bulls eye in the upper left corner. I fired 8 rounds at the bulls eye on the right and did not manage to land one. 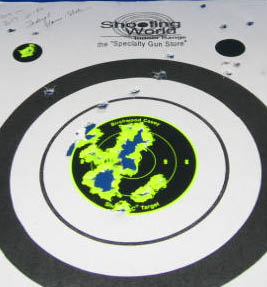 The second target was place at 31 feet. It is certainly not match accuracy but all in all it is not bad for a 3 inch barreled revolver. 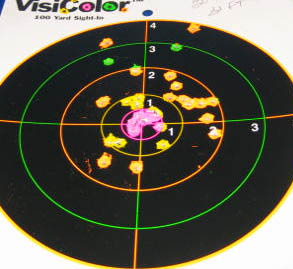 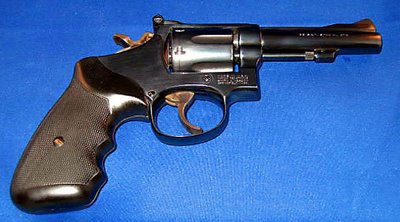 I have written about this revolver before and really like it. For a full review I would recommend that you go back into my archives and locate the complete review. This revolver is ultra accurate and the double action trigger pull is fairly light and smooth as butter. The only thing that bothers me is the grip. The rubber grips are rather thin so they focus the recoil into the web of my hand. I would also like a more visible front sight however; with the inherent accuracy already in this revolver my gut tells me to leave well enough alone.

The first target was placed at 21 feet. The center bullseye was fired at with 15 rounds of Magtech .38 Special 158 grain Lead Round Nose ammunition. The quarter sized bullseye at the upper portion of the page was fired at three times with the same ammunition. 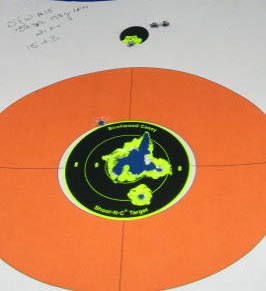 The next target was also placed at 21 feet. I wanted to see how this revolver would perform with some hotter self defense ammunition. I fired 12 rounds of Winchester .38 Special +P 158 grain Lead Swaged Hollowpoint ammunition. The accuracy was again, superb. I tend to like the heavier bullets in the Smith & Wesson ammo as the 158 grain bullet was the load that the Smith & Wesson K frame revolvers were designed around. The published ballistics show this round moving at 890 feet per second with 278 foot pounds of energy. 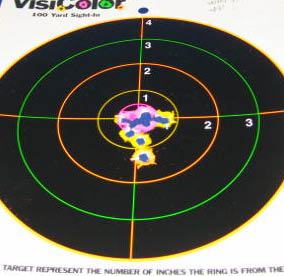 The next three targets were placed at 35 feet with Magtech 158 grain .38 Special ammunition.

In the first one the Terrorist is attempting to assassinate a Fox News journalist. It is rare to see this terrorist actually brandishing a handgun since he has sponsored so much legislation against them. His normal weapon of choice is ill-conceived socialist dribble although when he began his career as an assassin he used a 1967 Oldsmobile Delmont 88, a rickety bridge and a shallow creek. 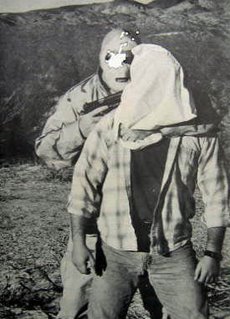 In the next target the terrorist is attempting to assassinate the 2nd Ammendment. Although she wants Ammendment #2 to get whacked, intelligence reports that she received the last concealled weapons permit before they were permanently banned in her residence within the USSF (the Union of Socialist San Francisco). 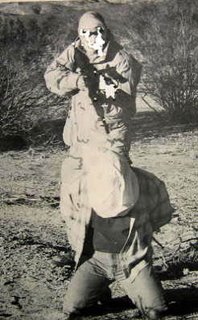 In the next target two Tikritan Terrorists are blocking rush hour traffic. Fortunately I was able to convince Darryl and his other brother Darryl that they are Fallujah Sh*t. 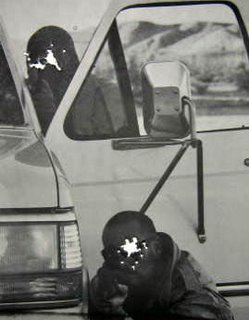