Fun Six Guns
We will start by examining two fun-shootin’ six guns; the Beretta Laramie in .45 Colt and the Cimarron Arms Model 1872 Navy in .38 Special.

The Laramie (top) is Beretta’s offering of the Smith & Wesson Model 3 and the Model 1872 Navy is Cimarron Arms’ rendition of Colt’s first metallic cartridge revolver. Both of these revolvers share some subtle similarities; both are made by Uberti, of Italy, (and marketed respectively by Beretta and Cimarron Arms), both replicas are being produced in calibers for which they were not originally chambered (.45 Colt for the Laramie and .38 Special for the 1872 Navy), they were originally produced in about the same time period and were in competition for the same markets.

To understand the evolution of these two revolvers we have to go back to Smith & Wesson’s beginnings in the 1850’s. Horace Smith and Daniel Wesson created their first partnership in 1852 and manufactured the Volcanic repeating pistol. After a production of 1,000 pistols, they sold their company to Volcanic Repeating Arms Company in mid-1855. They then formed a second partnership a year later to develop a self-contained metallic-cartridge handgun whereupon they produced the S & W Model 1 First Issue Revolver. These revolvers were produced in caliber .22 short. During the Civil War many were privately purchased by Union officers. Despite the woefully impotent caliber, the officers were drawn to the Model 1 due to the ease of reloading. The Model 1 was a fairly small handgun by the standards of its day and had no trigger guard. It held seven metallic cartridges and was reloaded by unfastening the catch at the front of the cylinder frame and then swinging the barrel, which was hinged at the top, upward. You dumped the cartridges, used the rod attached underneath the barrel to bash out any cartridges stuck in the cylinder, reloaded and went back to battle. Certainly not as fast as pressing the magazine release on your semi-auto pistol and slamming home another 18 rounds of 9mm, but the Smith & Wesson #1 was much faster to reload than the percussion cap and ball blackpowder revolvers the military issued from Colt and Remington.

It is fairly easy to imagine an officer charging (or being on the receiving end of a charge), expending the contents of his large caliber Colt or Remington and then reaching for the Smith & Wesson #1 to keep fighting. I would also imagine that, while the officer wielded his saber in his right hand, the S&W .22 short was easy to shoot with his left hand. In the War Between the States, the saber was still touted as the proper weapon for field officers and cavalry troops. Young Lieutenant George Armstrong Custer, fresh from West Point, openly questioned this in his first series of cavalry charges. He felt the left-handed, cross draw holster was poorly placed and also conjectured that the revolver was a much more effective weapon in a cavalry charge than a saber. Fifty years later, when the doughboys went to Europe, the horseback cavalry was present, but the saber had been permanently replaced by the Colt Model 1911 in .45 ACP.

After the Civil War Smith & Wesson increased the size of the revolver and produced them in larger calibers. The model #2 was produced in .32 caliber and then the Model #3 which was most popularly produced in some variation on the .44 caliber bullet. The #3 was hinged at the bottom of the barrel frame and opened by pushing upward on the rear sight which also served as the “catch” holding the revolver together. This function became to be known as a “break-top” revolver and when you “broke open” the revolver and swung the barrel down an extractor pushed the metallic cartridges out of the cylinder. This made the Smith & Wesson much easier and faster to reload. It was so well liked by the Tsar of Russia, that the Russian government purchased 130,000 model #3s for their troops. The ease of reloading and use of self-contained metallic cartridges would seemingly give Smith & Wesson a vast advantage over Colt, but for reasons unknown to me, Smith & Wesson did not become the dominant manufacturer of the era. Even so the Model 3 found its way into limited military service either through private purchase or limited government contracts. The model 3 also had its place in the taming of the Wild West. Among the noted individuals reported to carry one of the various S&W Model 3’s were Frank & Jesse James, Buffalo Bill Cody, Annie Oakley, John Wesley Hardin, Pat Garrett, Cole Younger, Bill Tilghman, Belle Starr, Theodore Roosevelt, and Virgil Earp.

During this period Colt realized that the revolver technology was changing and they needed to catch up. Colt was forced to wait until the S & W patent expired before they could offer their firearms in self-contained metallic cartridges. Once the patent expired, Colt and other manufacturers converted their “cap and ball” revolvers to fire cartridges. These were known to collectors as “Colt Conversions,” were produced in comparably small numbers, and hold a high collector’s value today.
The Colt Model1872 Open Top appears be a conversion, but it was actually Colt’s first revolver specifically manufactured to fire a self-contained cartridge, in .44 Henry Rimfire, and has a loading gate on the right side of the cylinder frame and a spring-loaded manual ejector rod offset to the right underside of the barrel just as would be found on the later and vastly popular Colt Model P (Peacemaker) revolver.
Shooting the Replicas (all targets were shot at 21 feet unless otherwise noted).

The Beretta Laramie is a beautiful revolver. The bluing is deep and rich and the grips almost have an orange hue which provides a nice contrast against the blue steel. Darker walnut grips would probably more correct for this reproduction but I do not mind. What I am not wild about from an aesthetic point are the gold Beretta medallions inset into the grips—this affectation is untrue to the original design. This is a minor complaint about appearance and certainly does not affect the functioning of the revolver. While the revolver shot high for me, the sights were well regulated for windage (in fact they are adjustable for windage via two small screws on the face of the rear sight) and it was not difficult to lower the front sight and hit the bulls eye pretty regularly. 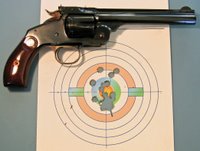 
The Laramie is chambered for the .45 Colt Cartridge. In shooting the Black Hills .45 Colt Cowboy Loads the big 250 grain chunk of lead lumbers toward the muzzel at a slow 725 feet per second. It almost seemed like I could feel bullet spiraling down the barrel.
The Cimarron Model 1872 was a surprise. This is a another handsome gun with a nice deep blue, brass grip frame, roll engraved cylinder, and case-colored charcoal hardened cylinder frame, trigger and hammer. Other than the .38 special caliber, this revolver is true to the original in every detail.

While it did shoot a little low, the application of a little Kentucky elevation brought the groups to the orange dot on the targets. I was surprised at the accuracy of this revolver due to the rear sight which is a very, very small bump with a slit in it and is situated where the barrel meets the cylinder. 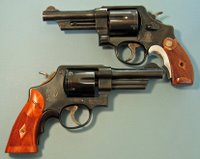 Other than caliber, the only differences between these two renditions are the grip frames and grips. The .44 Special came with a round butt and a set of chunky Ahrens grips which, while certainly functional, I immediately discarded and replaced with a set of reproduced vintage S&W diamond checkered service grips and added a Tyler T-grip adapter. These grips are very handsome, consistent with the period of the revolver’s production and also very functional. The .44 Special’s sights are well regulated for me and have given me excellent accuracy. 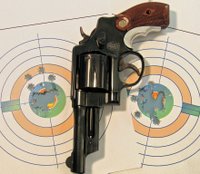 
After the .44 special was brought out, shooters suggested that the next revolver be manufactured with a square butt and proper vintage diamond checkered Magna grips. The grips have an orange hue to them and have the logo for Clint Smith’s Thunder Ranch Academy laser engraved on them. When I first saw them in a magazine I began looking for appropriate after market replacements. I am old enough to have owned original Smith & Wesson revolvers with the Magna grips and always thought they had terrible, blocky ergonomics (although in those days we didn’t know what ergonomics was, we just said the grips didn’t feel good). When I picked up this revolver I was surprised at how good these grips felt. Upon further examination I found that the grips had been rounded and contoured where the thumb and trigger finger make contact. These felt good and the only thing necessary to make them even more functional was a Tyler T grip adapter.

The .45 ACP shot a little low, but was easy to bring on to the target.

The single action trigger pulls on the 21 and 22 are absolutely great and the double action, while a little heavy, is quite a relief from the lawyer-proof 13 pound pulls that they have been putting on most of their handguns these days. Both of these revolvers hearken back to the day (when writing about going “back to the day” it is always best to use a word like “hearken”) when a desperado trying to run a police roadblock would be stopped in his tracks by a deputy who threw a chunk of .44 or .45 caliber lead through the lawbreaker’s windshield. I can only hope that the next evolution of this series is a revolver in .45 Colt.
Posted by Average Joe's Handgun Reviews at 9:47 PM