When I say this is a round-up that does not mean that this is an exhaustive look at .22 handguns, it merely means that I rounded up all of the .22’s in my safe to see how they stack up in terms of price, handling, and function. Let’s start with the least expensive.

The Phoenix Arms HP22 is a sheep in wolf’s clothing. By this I mean that it is a very inexpensive pistol trying too hard to market itself as a target pistol. When I bought this .22 way back in 1991 I think I paid something like $69.00 for this pistol which included the regular and target barrel and two magazines (one of them with a finger extension on the bottom). Now it’s going to a little more than twice that and while it’s still economically priced, pleased don’t have any illusions that it is a target pistol. You are getting what you pay for. I found no difference in accuracy between the regular, short barrel and the 5 inch target barrel. However, even though I find no accuracy difference, I keep the target barrel on the pistol just because I like the way it looks.

The pistol is easy to disassembly, but difficult to assemble. I have spent a lot of time looking for the recoil spring which has a tendency to jump out of the fame when you begin to compress it as you re-assemble the gun. Once when reassembling the gun I got the spring so bent and twisted that I had to send the pistol back to the factory. The good news is that they fixed it free of charge.

The gun is advertised as having target sights with the rear sight being adjustable for windage. In reality the sights are small and the accuracy of the gun is such that it is difficult to make a meaningful adjustment of the rear sight when you cannot get a grouping big enough to assume that the pistol is shooting to any particular spot on the target.
Lastly, the name “HP 22” sounds like a home office printer, not a firearm.

For the positives:
The pistol works. It always goes bang when you pull the trigger and I have not found it to be particularly ammo sensitive.
It is light weight and, even with the 5 inch barrel, it is compact.
It is comfortable to shoot.

The bottom line: This is a single action only gun with a decent trigger pull. If you need an inexpensive plinker this is a good deal however, don’t fall under the misconception that it is a target pistol. 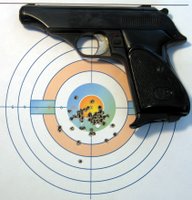 Bernadelli 74
This little pistol is something of a mystery, a UFO (undocumented firing object). According to the Blue Book of gun values it was never imported into this country. This is interesting since I have seen two others in .380 ACP (and wished I had snapped one up). Somehow they show up and this specimen, which set me back $200, was in excellent condition.

This pistol is heavy, and the black plastic grips fit my hand very nicely. The sights are small but useable. This is a single action only pistol and trigger has a little bit of pull with a nice crisp release.

The bottom line: I like this pistol. It is heavier than the Phoenix HP 22 but is more accurate, more ergonomic, and a lot more fun to shoot.

Beretta 85
This is a very cool pistol. I found it at Sherwood International in Northridge, California in about 1988. It had been a special order and the customer never picked it up. This model has a six inch weighted barrel that the attendant at more than one gun range mistook as a silencer. Although it has a target barrel, it does not have adjustable target sights and does not deliver target accuracy. It is however, fun to shoot and you can be sure that you will be the only one at the gun range with one.

As you can see from the target, it doesn’t shoot even as well as the smaller Bernadelli, but it is a very cool gun (and reportedly was favored by Israeli assassins for its low report). The Beretta 85 is also a single action only pistol and has a good trigger pull with a moderate amount of creep before let off.

I have written about this gun before. It is a full size .45 Government Model with a .22 hidden inside. It is very lightweight and packs more than enough accuracy for a .22. It has very comfortable rubber grips and adjustable target sights. I can find no faults with this pistol.

Like the Kimber Rimfire, the CZ Kadet is a full size 9mm that swallowed up a .22 pistol however, unlike the Kimber the Kadet is not a lightweight pistol. It has the same feel and weight as the full-size CZ but also has adjustable sights (which so far have not needed much of an adjustment). This pistol is also single action only with a light target trigger. The Kadet runs brand new at and even $400.00 and is accurate enough that, if serious, you could probably use it in rimfire competitions.